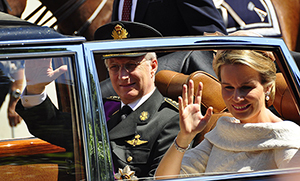 King Philippe and Queen Mathilde wave to the crowds in Brussels after Philippe’s swearing in as new Belgian monarch in July 2014.

BRUSSELS (AFP) – Belgium’s King Philippe visited the Jewish Museum in Brussels on Friday in a show of support for the Jewish community and the relatives of four people killed in a gun attack there in May.

Frenchman Mehdi Nemmouche, who had spent more than a year fighting with Islamic extremists in Syria, is awaiting trial for the attack on charges of “murder in a terrorist context.”

The king’s hour-long visit to the museum is a “clear signal to the Jewish Museum, to the victims of the May 24 attack and their relatives, and to the Belgian Jewish community as a whole,” a palace spokesman told AFP.

King Philippe released a statement the night of the shootings in which he expressed his dismay and anger over the attack against the Jewish community.

The museum’s director Philippe Blondin said the “royal visit shows to what degree the king was marked by the event and encourages us to move on,” according to the Belga news agency.

The monarchy holds a key position in Belgium, a country sharply divided between its French and Flemish speaking halves.

Nemmouche, who is of Algerian descent, is accused of bursting into the museum in central Brussels and shooting dead an Israeli couple, a French woman and a Belgian.

The museum opened again on Sept. 14 under tight security.

The shooting – the first such attack in Brussels in three decades – raised fears of a resurgence of anti-Semitic violence in Europe and of terror attacks from foreign fighters returning from Syria. 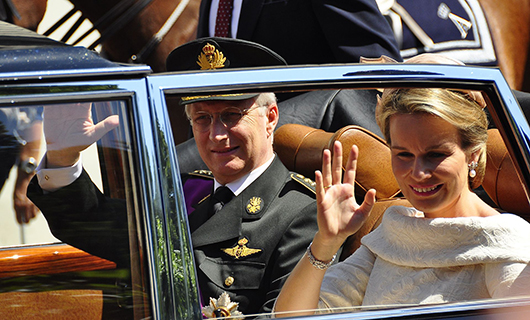 King Philippe and Queen Mathilde wave to the crowds in Brussels after Philippe’s swearing in as new Belgian monarch in July 2014.