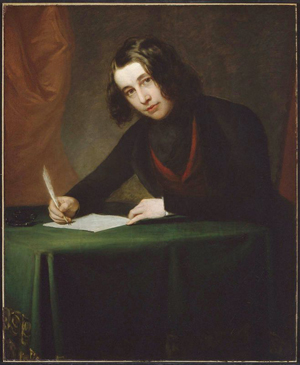 A portrait of Charles Dickens in 1842 by Francis Alexander. Image courtesy of Wikimedia Commons.

LONDON (AP) – He wrote about life in the modern city, with its lawyers and criminals, bankers and urchins, dreamers and clerks. He created characters still known to millions—Ebeneezer Scrooge and Tiny Tim, Pip and Miss Havisham, Fagin and Oliver Twist. And it made him a star, mobbed by fans on both sides of the Atlantic.

Britain on Tuesday marked the 200th birthday of Charles Dickens, the first global celebrity author and chronicler of a world of urban inequality that looks a lot like the one we live in today.

“You only have to look around our society and everything he wrote about in the 1840s is still relevant,” said Dickens’ biographer, Claire Tomalin. “The great gulf between the rich and poor, corrupt financiers, corrupt Members of Parliament … You name it, he said it.”

Dickens’ mistrust of the wealthy and compassion for the poor haven’t stopped him being embraced by Britain’s high and mighty.

Prince Charles and his wife Camilla, Duchess of Cornwall, joined Archbishop of Canterbury Rowan Williams, actor Ralph Fiennes, a host of dignitaries and scores of Dickens’ descendants at a memorial service Tuesday in London’s Westminster Abbey.

A simultaneous event was held in Portsmouth, southern England, where Dickens was born, the son of a navy pay clerk, on Feb. 7, 1812. In a message read out there, Charles called Dickens “one of the greatest writers of the English language, who used his creative genius to campaign passionately for social justice.”

In London, the heir to the throne laid a wreath of white roses and snowdrops on the writer’s grave in Poet’s Corner—resting place of national literary icons—and two of Dickens’ youngest descendants added a pair of small white posies.

Fiennes read from Dickens’ Bleak House, and there were prayers for the poor and marginalized, and for the writers, artists and journalists chronicling modern society.

Historian Judith Flanders, who attended the service, said it was “enormously moving”—and Dickens would have hated it.

“Dickens said in his will that he wanted no public ceremonies, no statues, no public acknowledgment,” said Flanders, author of the forthcoming book Dickens’ London.

“He wanted to be buried and die as a private man. He wanted his books to stand as his monument.”

He got his wish. Dickens’ novels and characters are more popular than ever.

The Royal Mail has just issued two new stamps featuring Dickens characters. Right now in Britain you can catch up with new television adaptations of Great Expectations and The Mystery of Edwin Drood, go to an exhibition about Dickens at the Museum of London or visit a theme park called Dickens World. A new film version of Great Expectations, starring Fiennes and Helena Bonham Carter, is due later this year.

“The quality of the writing is part of why we still relate to him today,” said Jo Robinson, a graduate student at King’s College London who is researching Dickens. “He’s an incredibly vivid writer. He has such an array of characters and there’s so much to get out of him … Each generation sees it in their own way.”

Part of Dickens’ staying power stems from his incredible productivity. An insomniac who often roamed London’s streets by night, he wrote more than 20 books, had 10 children, toured the world on lecture tours and campaigned for social change until his death from a stroke in 1870 at the age of 58.

“He believed he knew London better than any person alive, because he spent so much time walking the streets,” said Alex Werner, curator of the exhibition “Dickens and London,” running at the Museum of London until June.

Dickens’ drive and productivity were fueled by early poverty. When he was 12, his father was sent to debtors’ prison and Dickens went to work in a factory, fixing labels on jars of boot polish.

Those early experiences were reflected in his novels. Dickens exposed the cruelty of workhouses in Oliver Twist, the harshness of child labor in David Copperfield, the chasm between the rich and the poor in A Christmas Carol and the brutality of the legal system in Bleak House.

He also was one of the first writers to depict the modern industrial city—a place where millions of us still live.

Many features of his world are still familiar. The 19th century was an era of fast-paced technological change, and Dickens embraced it. He traveled Britain on newly invented steam trains–though he hated the juddering journeys—and crossed the Atlantic in 1842 on one of the first steamships.

He was also a commercially astute writer. His books were published in monthly installments, in an inexpensive magazine-style format interspersed with ads for everything from “Alpaca Umbrellas” to “the gentleman’s real head of hair.”

“It feels very modern,” Werner said. “A bit like TV soaps—you have to get through the adverts.”

Werner thinks that if Dickens were alive today he’d write for television—he always wanted to reach the widest possible audience.

He might not have approved of another major celebration, the 2012 London Olympics. Dickens was not a fan of the 1851 Great Exhibition, a huge popular display of imperial self-confidence. The next year he began publishing Bleak House, with its depiction of the city’s extremes of poverty and wealth.

Werner says it’s a vision that chimes with our own times—though he hopes it won’t eclipse Dickens’ humor.

“Maybe 20 or 30 years ago his work didn’t have that same cutting edge,” he said. “It was a more optimistic time. Now everything feels a bit more gloomy. The gap between rich and poor—it feels very close to the Victorian world.

“There is an attraction right now to the darker side of Dickens. But he was very funny.”

Jill Lawless can be reached at: http://twitter.com/JillLawless 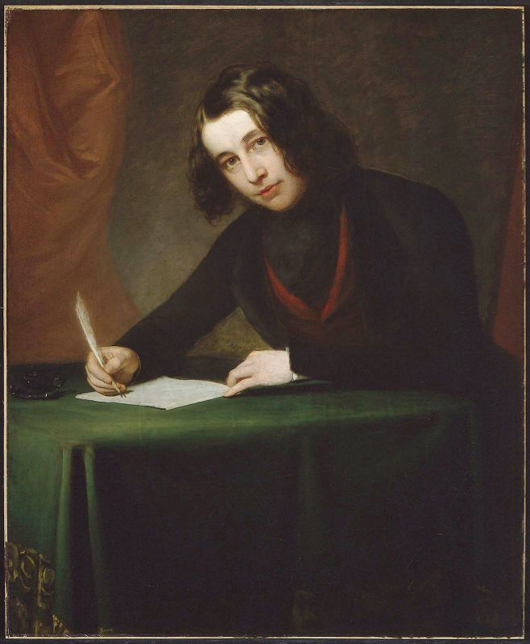 A portrait of Charles Dickens in 1842 by Francis Alexander. Image courtesy of Wikimedia Commons.