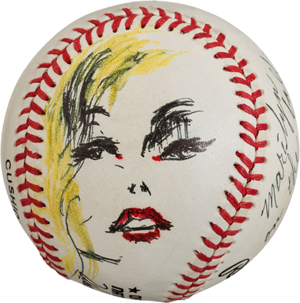 The 1992 Joe DiMaggio signed baseball with a portrait of Marilyn Monroe by LeRoy Neiman. It sold for $95,600. Image courtesy of Heritage Auctions.

The 129 art-decorated baseballs were made over 30 years for Neiman’s friend Charlie McCabe, a bank marketing executive. Most were done in colored marker and captured some of baseball’s greatest players.

Heritage Auctions says the top-selling ball depicted artwork of Marilyn Monroe and was signed by Joe DiMaggio, Monroe’s second husband. It sold for $95,600.

A baseball illustrating Bobby Thomson’s “shot heard round the world” sold for $26,680.

Thomson’s homer off Ralph Branca of the Brooklyn Dodgers clinched the 1951 National League pennant for the New York Giants.

Altogether, the online sale that ended early Saturday fetched a total of $491,748.

Neiman died in 2012. He was known for evoking the kinetic energy of the world’s biggest sporting events.

He was the official painter of five Olympiads and a contributing artist at Playboy magazine for many years.

McCabe’s friendship with Neiman evolved during his time as marketing and communications officer at Manufacturers Hanover, later JP Morgan Bank. The bank sponsored teams including the Yankees, Giants, Jets and Knicks. When a beer sponsor that had awarded the Mets Player of the Year each year with an original Neiman drawing pulled out, Manufacturers Hanover stepped in.

“The first ball LeRoy made would have been 1978, when we went to Mets spring training,” McCabe said in an interview when the sale was announced this month. “I gave him a ball and asked him to draw on it.”

“He got a real kick out of painting the baseballs because he hadn’t ever drawn anything on a ball before,” he added. Over the years, McCabe said, he asked the artist to sketch other celebrities, too.

Neiman drew on some of the balls at games, others in the car as McCabe ferried him to and from stadiums. Some he later embellished at his studio.

McCabe said he kept his collection in the cellar of his New Rochelle home and never exhibited it. He planned to donate part of the proceeds, saying Neiman helped with the many charities McCabe supported.

Copyright 2014 Associated Press All rights reserved. This material may not be published, broadcast, rewritten or redistributed. 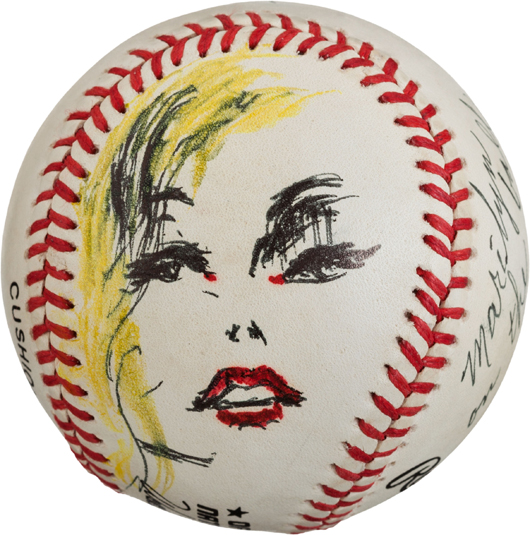 The 1992 Joe DiMaggio signed baseball with a portrait of Marilyn Monroe by LeRoy Neiman. It sold for $95,600. Image courtesy of Heritage Auctions.