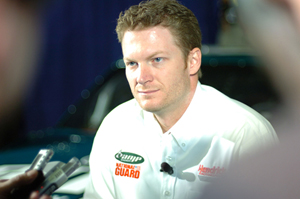 CONCORD, N.C. (AP) – It turns out Dale Earnhardt Jr. has a pastime that thrills him nearly as much as winning a checkered flag.

Earnhardt Jr. has an extensive collection of NASCAR memorabilia, from scaled down die-cast cars to old programs and magazines that detail the sport’s long history. He watches online auctions on eBay, and several times a day hits the website on his tablet or smartphone, sees what’s available and puts in a bid on things he wants.

“It’s something I like doing, done it for years,” he said.

Some bidders have figured out “Little E” is in the mix, ‘commenting online, “‘I know who this is,’” Earnhardt said.

Earnhardt wouldn’t estimate how much his collection might be worth. He keeps them in neat boxes at his home.

One day last week, Earnhardt said he was in on an auction for a racetrack decal he saw on eBay that had a $6 bid that morning. “I might go up to nine dollars,” He said with a chuckle.

Earnhardt gets charged up when auctions come down the wire and he’s in the mix for an item he really, really wants.

“Yeah, it’s like racing, you just have to move on if you lose,” he said. “But you feel good when you pick up something that’s cool.”

Earnhardt says he also scours auctions for vinyl albums and old magazines. In fact, one of his most prized possessions came courtesy of longtime girlfriend Amy Reimann, who found a pristine copy of Playboy’s 1953 edition with the late Marilyn Monroe on the cover. He got it for Christmas.

“I not one who’s gets too excited about presents, but that one was special,” he said.

Earnhardt. and eBay Motors are teaming up in the Garage for Good campaign. Earnhardt will drive the No. 88 eBay car in the Nationwide Series event at Michigan International Speedway in two weeks; with each new registered user to eBay Garage through June 30, eBay will donate $1 to the Dale Jr. Foundation, up to $25,000.

Bryan Murphy, eBay Motors general manager, said the company didn’t know Earnhardt was a fan until the Hendrick Motosports driver met eBay executives. Having Earnhardt on board for the partnership and a site user is a lift for the organization, Murphy said.

“People like Dale Jr. are just enthusiasts and you can forget these people are famous celebrities,” Murphy said. “He’s like many of our motors’ customers and it’s our business to connect people with the things that they love.”

Earnhardt grew up around the sport because of his late father, Dale Earnhardt, and got to know some of racing’s all-time greats like Richard Petty, Ned Jarrett and Cale Yarborough during his youth in the garage. Earnhardt Jr. didn’t lose that sense of history when he followed his dad onto the racetrack.

He said he mostly seeks race programs, NASCAR guides and magazines from decades ago that detail how the sport was run before he became involved. He also likes acquiring programs from races he attended as a boy.

When they arrive, Earnhardt says he pores through them and soaks up the information inside.

“It tells me what went on and gives you a sense of racing back then,” he said. “They can take you back to when you were there and bring you some good memories.”

Of course, Earnhardt is always on the lookout for collectibles tied his father’s career. He’s got dozens of black, No. 3 die cast cars nicknamed “The Intimidator.”

Earnhardt is off to one of his best starts this season. He won the season-opening Daytona 500 and has had eight top-20 finishes in the 11 races since including a 19th at the Coca-Cola 600 on Sunday night.

Earnhardt won’t slow down his auction searches, ready to pounce on unique items to add to his collection. 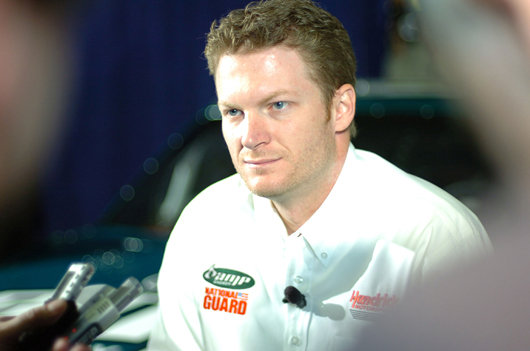