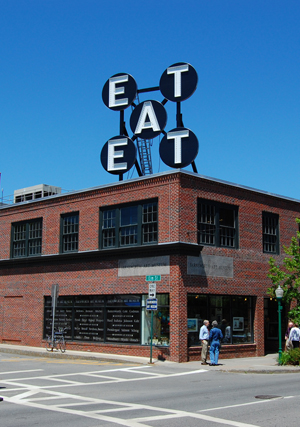 VINALHAVEN, Maine (AP) – Robert Indiana never saw his oversized EAT sign illuminated after it went up at the New York World’s Fair in 1964. A day after being turned on, the sign with its hundreds of light bulbs was turned off because it was attracting hungry tourists who thought it was a restaurant, not a piece of art.

On June 20, the EAT sign goes back on public display for the first time in 44 years as part of Indiana’s first major U.S. exhibition in a decade, at the Farnsworth Art Museum in Rockland. The sign is being installed atop the museum roof with lights flashing on five large metal discs with the letters E, A and T.

Having EAT rise again after all these years brings back memories of his mother, who at one time ran a diner and whose final dying word was “eat,” Indiana said.

“When the sign is finally turned on the roof of the Farnsworth and I see it for the first time, that will be one of my most exciting days in Maine and one of the most exciting days of my life,” he said in an interview at his studio on Vinalhaven, an island 15 miles off the Maine coast where he has lived since 1978.

Indiana, who is 80, was part of the pop art movement of the 1960s, known for his recurring use of numbers and words and bright flat colors that seem to jump off his paintings and sculptures. He cringes at the term pop artist, preferring to call himself a “hard-edged artist.”

The Robert Indiana and The Star of Hope exhibition, which runs June 20-Oct. 25, will feature about 80 of Indiana’s pieces spanning his career. Nearly all the work comes from his Star of Hope studio, and many of the pieces have never been publicly displayed before.

The EAT sign – five 300-pound discs, each 6 feet in diameter – is being showcased nearly 50 feet above ground level on top of the museum, where it will flash, flicker and blink from morning until late at night. The original light bulbs have been replaced with modern light-emitting diode bulbs. The museum had a special base built so the sign can withstand winds of up to 100 mph.

Inside the museum, Indiana’s works will fill five of the 12 galleries. They include his LOVE sculptures and prints, along with his “Marsden Hartley Elegy” series and his new HOPE sculpture, which he created for Barack Obama’s presidential campaign and premiered at last summer’s Democratic National Convention.

His Eighth American Dream oil on canvas – measuring more than 14 feet square – hangs in the museum lobby, where a new wall had to be built so there’d be a place big enough for it to be displayed. The museum gardens will have several outdoor sculptures, including his 12-foot-by-12-foot LOVE wall and his 8-foot-high Art sculpture.

Indiana has lived on Vinalhaven for 31 years, but you’d never guess it from his art. His work in Maine is a continuation of what he started in New York in the 1960s when he and such artists as Andy Warhol and Roy Lichtenstein were making names for themselves as pop artists.

LOVE, two letters to a line with the “O” tilted sideways, is Indiana’s best-known work, instantly recognizable worldwide. There are hundreds of his LOVE sculptures around the world, some of which have sold for as much as $3.5 million, he says.

Indiana lives in a 19th-century, four-story building located on the main drag of Vinalhaven, a community of about 1,300 year-round residents. His home was once an Oddfellows Lodge, with sprawling, dark rooms and wide, steep staircases. After 9/11, Indiana painted American flag images on the exterior walls.

The house feels like a mystical sort of fun house, with hundreds of his works – “It’s my own private Indiana museum” – and dozens of stuffed giraffes, dogs, apes, zebras and other animals throughout. “These are my friends,” he said, standing next to one of his 11 stuffed giraffes. “It keeps one from becoming lonely.”

His LOVE icon is everywhere: on wall hangings, on sculptures that sit on tables and bookcases, on lamp shades, on a vest worn by a stuffed bear. His personal assistant wears a leather jacket with LOVE on the back.

Indiana didn’t move to this Down East fishing village for its rocky coast and lobster boats. Rather, he moved to his house – which a benefactor bought for him in 1969 – when he needed a place to go after his lease ran out on his five-story studio and gallery in the Bowery section of New York City.

He’s never quite fit in here and said he lives the life of a recluse, spending most his time in his oversized house with his personal assistant and some helpers who come during the day. One of his studios is an old sail loft that has a waterfront view of Vinalhaven’s picturesque harbor; lobster traps, buoys and rope are piled in the yard next door.

Yet none of this makes its way into his work. He said only one of his pieces was inspired by living in Maine: a canvas that is essentially blank except for the word FOG – with a tilted “O” – at the bottom.

“This is my only work influenced by my life on Vinalhaven,” he said. “I thought one day I’d do a landscape. I looked out the window, and this is what I saw.”

Instead, he said his work is driven by his own life all the way back to his roots in Indiana, where he grew up as Robert Clark before changing his last name to his home state. He finds meaning in numbers and colors, and said his life is full of coincidences that propel his work forward.

Ask him about his father and he’ll tell you that he worked for Phillips 66, whose signs, gas pumps and buildings were red and green in those days. When Indiana passed by one of those signs as a child, he’d see the red and green against the blue sky – which is why he used red, green and blue in his LOVE works.

Phillips 66 also plays a role in his frequent use of numbers – in this case, the No. 6.

“My father was born in June, the sixth month, to a family of six members,” Indiana said. “He worked for Phillips 66, he left my mother and headed out on Highway 66 to California and he passed all those little signs on the farmers’ fences that said ‘Use 666,’ which was a cold remedy. Six, which is a sign of love, is definitely a dominant number.”

The EAT sign has been hidden away since the World’s Fair showing. For much of the time, it was kept in a storage shed behind Indiana’s house that was once an eight-seater outhouse for the Oddfellows Lodge.

“Given our mission to celebrate Maine’s role in American art, an exhibition of Robert Indiana’s work is common sense,” he said.

The Farnsworth Art Museum provided Auction Central News with a series of photographs documenting the process involved in hoisting the EAT sign into place on the rooftop of its gallery. Those images, which are copyrighted and used by special permission, may be viewed below. 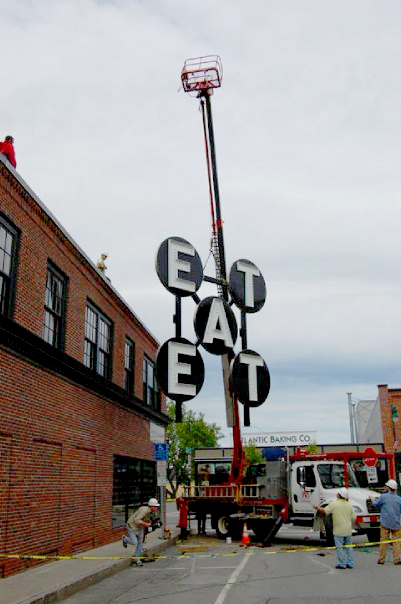 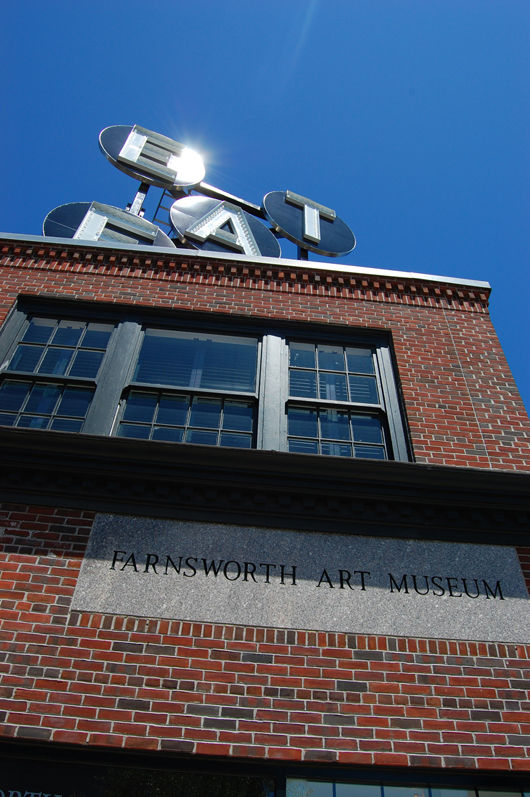 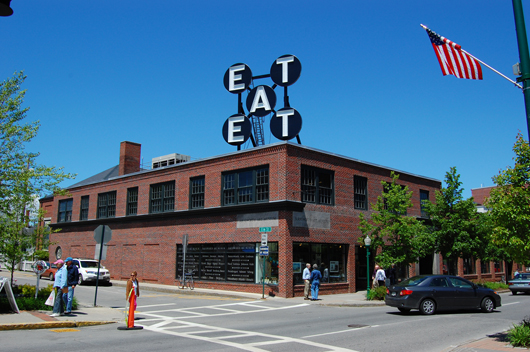