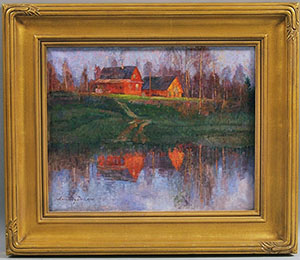 His masterful paintings showcase peaceful landscapes ranging from the French countryside to Nantucket beaches, while his portraits evoke the lives lived by the lined and weathered faces peering out from his canvases.

“Rembrandt, eat your heart out,” he joked when asked about his work, which will be exhibited at The Preservation Framer all this month.

Now a resident of Plainville – or as he calls it, “the center of the universe” – the 79-year-old grew up in Ukraine. He learned how to sketch in his childhood while sitting next to his father, an artist who drew signs and banners for Soviet leaders.

During World War II, Dverin’s father went to the front to fight, while Dverin and his family fled their hometown of Dnepropetrovsk just ahead of the Nazi invasion, ending up in Armenia.

After the war, they returned home to Ukraine, where whey found another family living in their apartment. So few homes survived the war, the family of four ended up sharing a basement with two other families.

Dverin’s artistic talent was already growing during the war, when he drew on the inside of book jackets because paper wasn’t readily available.

He later studied at the Institute of Fine Art in Kharkov, Ukraine, and became a member of the Artists Union of the USSR in 1964. To become a member of the union, which made making a living as an artist possible, artists needed to have their work shown in three national exhibitions in Moscow.

By the 1970s, Dverin and his wife, Lora, grew tired of the region’s politics and the lack of artistic freedom. They applied for a permanent exit visa for themselves and their daughter Elena, only to find themselves harassed for the decision.

“If you were sitting on a stove and it was warm and cozy, you’d stay there. But if it got too hot, you’d jump. I jumped,” Dverin said of his decision to leave Ukraine.

While waiting for the visa, Dverin was expelled from the Artists Union and both he and Lora lost their citizenship. They were forced to turn in their college diplomas and driver’s licenses.

Eventually, they were ordered to leave within 10 days and the family immigrated to the United States in 1976 with $200 in their pockets and without knowing any English.

Initially they settled in Brookline, and thanks to a realistic drawing of a stamp Dverin made on an envelope, scored a job at Rust Craft Greeting Cards, where he drew one greeting card per day.

Three years later, Dverin started Anatoly Illustrations and began producing commercial art. Meanwhile, he moved into painting with oils and pastels, which he still does today.

His landscapes, portraits and still lifes have garnered awards and recognition worldwide.

The exhibition at the Preservation Framer at 16 N. Washington St. will include more than 30 of Dverin’s original paintings, along with another 30 prints, with many works for sale.

Matt Slobogan of The Preservation Framer was already familiar with Dverin and his work when the artist came into the shop to look at frames. Slobogan offered an artist’s discount, to which Dverin responded, “How do you know I’m an artist? Maybe, I’m a doctor.” 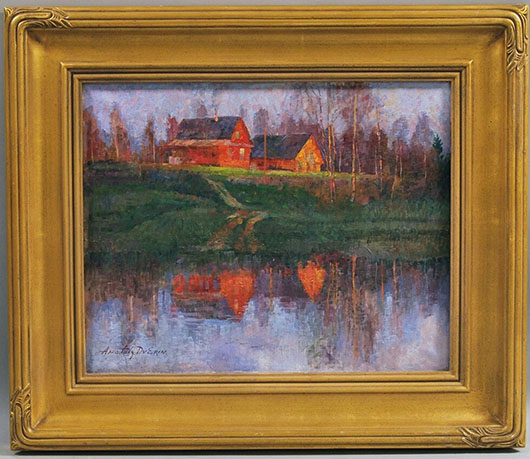