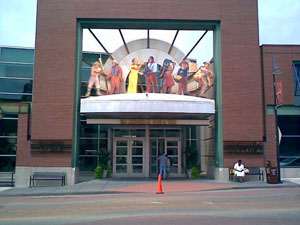 Entrance to the Kansas City building that houses both the Negro League Baseball Museum and the American Jazz Museum. Aug. 1, 2007 photo by SakuraAvalon86. Licensed through Wikimedia Commons under the Creative Commons Attribution-Share Alike 2.5 Generic, 2.0 Generic and 1.0 Generic licenses.

KANSAS CITY, Mo. (AP) – Less than two years after he was hired, the executive director of the Negro Leagues Baseball Museum in Kansas City has resigned.

The museum says 62-year-old Greg Baker resigned effective Tuesday. No explanation was given for his departure.

The Kansas City Star reports that Raymond Doswell, vice president for curatorial services at the museum, will be the museum’s interim leader.

Baker’s hiring in December 2008 was controversial from the beginning. The museum’s board hired him on an 8-7 vote over Bob Kendrick, the museum’s longtime marketing director.

But board member Mike Kanaley says whatever rift existed over the hiring has been resolved.

Houdini’s art and magic on display in New York