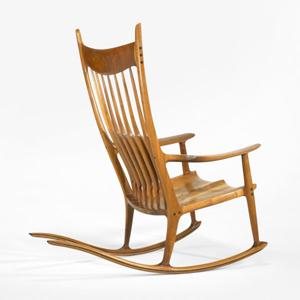 Maloof, the son of Lebanese immigrants, died on May 21 at his Southern California home, his business manager Boz Bock told the Los Angeles Times. No further details were given.

Maloof was praised for putting usefulness before artistry in the chairs, cradles, hutches and other pieces he designed and crafted by hand.

Maloof’s signature piece was a rocking chair with elongated rockers jutting backward. The feature appeared sculptural, but was actually incorporated to keep the chair from tipping over.

Former President Jimmy Carter, who signed a photograph “to my woodworking hero” during a visit to Maloof’s home, and subsequent presidents used Maloof’s rocking chairs in the White House.

Maloof’s modern furniture, assembled entirely out of wood without nails or metal hardware, fit handsomely in the minimalist homes of the postwar era. Its wood, leather and cork softened the hard edges of the era’s architecture.

“He was trying to make other people appreciate what it was like to live with a handcrafted object in which there was a kind of union between maker, object and owner,” said Jeremy Adamson, who wrote The Furniture of Sam Maloof, published in 2001 to coincide with an exhibition of Maloof’s work at the Smithsonian American Art Museum’s Renwick Gallery in Washington.

While in elementary school, he used kitchen knives to carve wooden toy guns, swords and trucks.

After marrying his first wife, Alfreda Ward in 1947, Maloof used discarded fir plywood and oak shipping crates to build furniture for their new home, since they could not afford finished pieces. Soon friends asked for copies of the no-frills furniture.

Two years after opening his woodworking business in 1949, Better Homes & Gardens published photographs and plans of his furniture to show readers how to decorate economically.

In 1957, the American Craft Museum in New York displayed Maloof’s work in its first exhibition of studio-craft furniture. Over the decades, his work has entered permanent collections at the Metropolitan Museum in New York, the Boston Museum of Fine Arts, the Philadelphia Museum of Art and other museums.

One of his former homes that he transformed from a small bungalow into a timbered 22-room house with a hand-carved spiral staircase and door latches shaped like miniature golf clubs, is listed in the National Register of Historic Places.

Maloof was also the first craftsman to receive a MacArthur Foundation grant in 1985.

Friends said Maloof remained humble through his successful career and still referred to himself simply as a “woodworker,” even as pieces of his furniture were reselling for 100 times their original price.

“I like the word,” he once told a Times reporter. “It’s an honest word.”