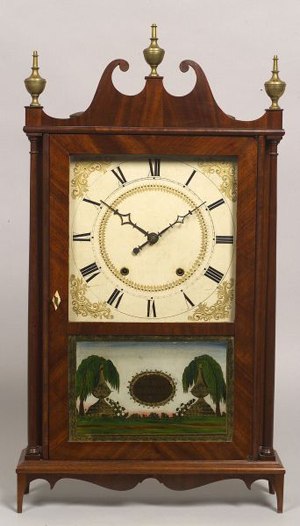 Clock repairman Dave Myers says that clocks made by Eli Terry are among his favorites. This Federal pillar and scroll clock was made by Eli and Samuel Terry, Plymouth, Conn., circa 1825. Image courtesy of LiveAuctioneers Archive and Skinner Inc.

BOONSBORO, Md. (AP) – For Dave Myers, the tick-tock of a clock is the heartbeat of a house.

Myers repairs grandfather clocks, mantel clocks, wall clocks or any type of clock that doesn’t need to be plugged in.

For Myers and his customers, a clock is a piece of history. Many were passed down through the family; others came from auctions or antique shops.

These clocks don’t need battery backup. They continue to strike the hour and the quarter-hour when the electricity goes out.

Myers, 58, has a small workshop and storefront attached to his house at 104 N. Main St. in Boonsboro. He also sells clocks at a booth in the Emporium in Frederick. In his workshop, open Wednesday through Sunday, there is not a digital clock in sight.

Clock owners usually find out about him the old-fashioned way, by word-of-mouth. Myers also makes old-fashioned house calls, traveling as far as the Washington area. Some of his customers live as far away as the Eastern Shore.

Myers grew up in Myersville, where his family roots run deep. For many years, he lived in Middletown and owned a drywall business. He loved old clocks, and began collecting them. He and his wife moved to the Outer Banks of North Carolina for nine years. For the first few years, he had a landscape business. Eventually, Myers began repairing clocks full time.

“People drove two hours to bring their clocks to me,” he said. “My second customer was Andy Griffith. He collects clocks and pocket watches. He was a little upset when I came up here.”

Ten years ago, the couple moved to Boonsboro and Myers brought his clock repair business with him.

As a young man, Myers apprenticed under Gerald Jones of Boonsboro. “I spent almost every other evening with him,’ Myers said, recalling that his wife wasn’t too happy about that. For four years, Myers observed what Jones did, and for an additional three years, he honed his craft by repairing his own clocks.

“I do everything by hand, no lathe, no nothing,” he said.

Power tools can be used to fix old clocks, but Myers wanted none of that. “I wanted to learn the way they used to do it,” he said, adding that the method makes for a better repair.

“I take the movement out, bring it back and repair it,” he said. The movement is the heart of the clock, whether it’s a wall clock, a banjo clock or a grandfather clock. If the clock needs to be serviced, he does it on site. If not, he brings the movement back to his workshop.

The workbench takes up much of the shop. Myers sits behind the bench, wearing a headlamp so he can illuminate the tiny inner workings of the clock. A clock may be large, but it’s these pieces, either brass or wooden, that keep it ticking.

The escapement gear, which looks like a circular saw blade but is about the size of a quarter, regulates the clock’s pendulum. A tiny pallet fork rotates the gear, which produces the tick-tock. The gear in turn pushes the hands forward.

“If you have the wrong escapement gear, it will not keep accurate time,” Myers said. A clock’s gear ratio and the number of teeth on the gear regulate how fast or slow it runs.

On his workbench are rows of screwdrivers, scissors and pliers, and trays full of nuts and bolts. There are tiny drills the size of sewing needles, and there is a butane torch for soldering. There are also cleaning solutions and tools to repair wood, stoneware, pottery, porcelain and metal – anything that a clock might be made of.

“A clock is a piece of furniture,” he said. His favorite clockmakers are Eli Terry and Seth Thomas. Terry is the father of American clockmakers. “(John) Fessler (an 18th-century Frederick, Md., clockmaker) and others used movements from England,” Myers said.

“Eli Terry made them from the ground up,” he said. Wood was easier to get than metal, so most of the works of the old Eli Terry and Seth Thomas clocks were wood. Only the escapement, the shaft and the wire were metal.

Throughout the 19th century, the Eli Terry and Seth Thomas clock factories employed hundreds of people who created weight-driven and spring-driven clocks. There were eight-day clocks and 30-hour clocks. Some even had alarms to remind people to set them.

“If you lived in the country in 1830 and your clock stops, where are you going to find out what time it is?” he said. The early clockmakers continued to make sundials along with the more technologically advanced mechanical clocks.

Myers charges $65 for a standard house call, which involves oiling the works of a clock. He charges $120 if he has to travel to Frederick. A clock’s works should be oiled every four or five years.

“There’s a lot to know about these things,” he said.

Information from: The Frederick (Md.) News-Post,