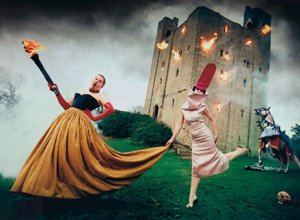 LONDON – His runway shows were often like performance pieces: One featured models with headwear made of trash. Another showed off 10-inch heels shaped like lobster claws.

At the pinnacle of his success, British fashion designer Alexander McQueen was found dead in his home Thursday, days after posting anguished online remarks about the death of his mother. He was 40.

The circumstances pointed to a possible suicide, but there was no confirmation from police or McQueen’s publicists. Authorities said the death was not suspicious, apparently ruling out foul play. They did not indicate how McQueen was discovered.

The Sun tabloid cited an anonymous source on its Web site who said workers found McQueen hanging in his apartment. The newspaper gave no further details. His family issued a statement asking for privacy.

McQueen is credited with helping revive the once-moribund British fashion industry. His edgy pieces were coveted and treasured by stylish women across the globe and seen on numerous red carpets.

Vogue Editor-in-Chief Anna Wintour called McQueen “one of the greatest talents of his generation.”

“He brought a uniquely British sense of daring and aesthetic fearlessness to the global stage of fashion. In such a short career, Alexander McQueen’s influence was astonishing — from street style, to music culture and the world’s museums,” she said in a statement. “His passing marks an insurmountable loss.”

McQueen did not design for the celebrities, but they flocked to him for the sheer audacity of his creations, which were instantly recognizable for being dramatic, exquisitely tailored and oh-so sexy.

A stunning dress for Sandra Bullock? A special order for Madonna? Something special for Kate Moss or Naomi Campbell? All these feats seemed easy for the quiet, slim, bearded Englishman who shunned publicity and laughed off the limelight.

McQueen’s mother died Feb. 2. Some fashion experts speculated that his mood may have also been clouded by pressure to outdo himself again next month at his catwalk show in Paris.

News of his death broke at the start of New York Fashion Week and sent shock waves through the Bryant Park tents. A presentation of McQueen’s secondary label, McQ, had been scheduled for later Thursday, but it was quickly canceled.

After word of his death spread, one mourner left pink flowers at the doors of the designer’s London headquarters. Mourners also gathered outside his New York store.

“He was a great, great talent who had lost someone important in his life,” said Xavier Keane, who placed the flowers. “I know how he feels because I lost my mother last year.”

“i’m letting my followers know the my mother passed away yesterday if it she had not me nor would you RIP mumx,” he wrote.

On Sunday, he used an obscenity to describe his “awful week” and said he had to “some how pull myself together and finish.”

Four days later, he was dead.

“If you are a genius, the pressure to be a genius is always immense,” said Imogen Edwards-Jones, author of the “Fashion Babylon,” a novel on the untidy underside of the industry.

McQueen helped spark a renaissance in London fashion, helping to revive it after the long-dormant period that followed the punk explosion in the 1970s.

He was also responsible for one of history’s most famous “wardrobe malfunctions.” He designed Janet Jackson’s Super Bowl outfit, which fell open while she was singing, revealing one of her breasts.

In the usually glad-handing fashion world, McQueen was known as a private man who shunned the limelight. He turned down most interview requests and did not cultivate a cult of personality or try do develop an air of mystery about his work.

McQueen, a trim, handsome man with startling gray-blue eyes, had an easy smile, but did not linger in the camera’s glare.

“In a world where every man and his dog is a designer, Alexander McQueen was the real deal,” said celebrated hat maker Philip Treacy. “His talent was supersonic.”

McQueen made his name first in London, then wooed audiences in Paris, New York and Milan to take his place in the upper echelons of the designing world. He was named British Fashion Designer of the Year four times, and was recognized by Queen Elizabeth II in 2003, when she made him a Commander of the British Empire for his fashion leadership.

“McQueen influenced a whole generation of designers. His brilliant imagination knew no bounds as he conjured up collection after collection of extraordinary designs,” said Alexandra Shulman, the editor of British Vogue.

Hal Rubenstein, a fashion director for InStyle magazine said McQueen started out tough and angry — in his work and attitude — but softened over time as he felt more appreciated by the industry.

McQueen, he said, was a master of integration of technology into fashion.

“He changed the way so many of us see shows.”

McQueen was known for pushing the envelope. At his spring-summer 2010 collection, he featured sculptural cocktail dresses in psychedelic snakeskin prints, with the hoof-like platform booties that were worn by Lady Gaga. The show opened with huge screens projecting close-up images of a woman writhing among a den of snakes.

The death left the future of the McQueen label in doubt.

After a founder’s death or retirement, other major labels have turned to lesser-known in-house talent, as happened with Valentino; or brought in outside designers, as happened at Emanuel Ungaro; or even recruited family, as with Versace.

McQueen was the youngest of six children born to a taxi driver and a teacher. He received his early fashion training at the Central St. Martin’s College of Art and Design, long recognized for its fashion-forward approach and encouragement of Britain’s talented young designers.

He learned the finer points of traditional men’s tailoring at two famous, conservative Savile Row houses: Anderson and Sheppard, and Gieves and Hawkes.

After his Savile Row stint, McQueen started to develop his trademark, more theatrical designs, working with several other brands before first starting his own label in 1992.

He quickly earned a reputation for innovation. The company he founded was purchased by the Gucci Group, and he retained creative control of his own brand. There were plans for stores in Paris, Milan and London, as well as Manhattan and San Francisco.

His runway shows were always a highlight during the Paris ready-to-wear fashion week.

One of his previous collections included a show built around the concept of recycling, with models donning extravagant headwear made out of trash. His last collection, shown in October in Paris, featured elaborate and highly structured cocktail dresses. Critics raved.