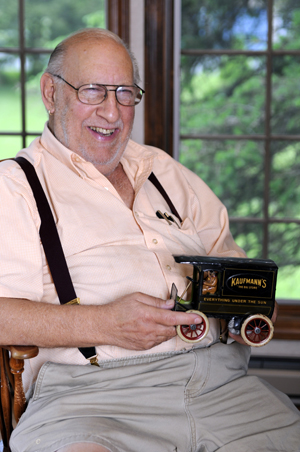 Donald Kaufman with a tinplate delivery van advertising “Kaufmann’s – The Big Store – Everything Under the Sun.” Photo by Phil Dutton, courtesy Bertoia Auctions.

PITTSFIELD, Mass. – Donald Kaufman, who co-founded K-B (Kaufman Brothers) Toys and was widely acknowledged as one of the world’s great collectors of antique toys, died of a heart attack at his home on Oct. 12, 2009. He was 79.

Donald Lewis Kaufman was born in Pittsfield, Mass., on Oct. 8, 1930, the son of Harry and Ruth Klein Kaufman. He grew up in Pittsfield, where his family had owned a wholesale candy and toy “sundries” business since 1922. Donald attended public schools in Pittsfield and graduated from the Wilbraham Munson Academy, after which he attended North Adams State College. From there he joined the U.S. Army and served in the Korean Conflict.

After the war, Donald helped parlay the family business into what would become known as K-B Toys, a nationwide chain of retail toy stores. With his natural business acumen, Donald was responsible in part for the company’s revolutionary volume buying and discount pricing; the establishment of toy stores in the newly emerging indoor shopping malls of the late 1950s, and the advertising of toys such as Chatty Cathy and Robert the Robot directly to children through the fast-growing medium of television. The Kaufman family sold K-B Toys in 1981 to Melville Corporation, later known as CVS Corporation.

In 1950, Donald acquired his first antique toy – an Arcade cast-iron truck purchased from a friend for $4. The transaction would begin a collecting odyssey of nearly 60 years. He relished combing through antique stores and shopping the first of the Brimfield shows – usually on a bicycle. He bid in countless auctions and cultivated relationships with toy dealers and enthusiasts worldwide who helped him amass an unrivaled collection of possibly as many as 10,000 toys.

In 2008, Donald made the decision to consign his collection to auction, telling the media, “It is time. I want to have as much fun selling the collection as I had in building it.”

Because of the size of the collection, it was determined that it should be auctioned in semiannual sales over a two- to three-year period. Intensely publicized in the global print media and with national television crews on hand, the first two auction sessions were held at Bertoia Auctions in Vineland, N.J., on March 19-21 and Sept. 25-26 of this year. Donald and his wife and constant companion, Sally, were in attendance, signing auction catalogs and reuniting with old friends from the toy community.

“Don was in his element,” recalled Jeanne Bertoia, owner of Bertoia Auctions. “It was very important for him to be able to see it being sold. He wanted the toys to be spread among all the collectors, and he was excited about seeing where the toys would end up. No wonder he was so beloved.”

Donald and Sally approached the collection as a shared pursuit that took them to Europe and nearly every toy show in the Northeast. “It was a team effort,” Donald once said. “It was one of my lifelong pleasures. When Sally came into my life 20 some years ago, she partnered in it and enjoyed what we did just as much as I did. I couldn’t have done this without her.”

Sally, in return, admired her husband’s passion for the hobby. “He didn’t just see a toy,” she said. “He would look at that toy and think about the history. He thought about what it was made of, the design, the people who sat there and made it. He would hold it and say, ‘If only it could talk. I wonder who held it. I wonder how much joy this toy brought to kids.'”

Donald researched every toy he ever bought and was known as a “completist.” According to Richard Bertoia, who cataloged the collection prior to auction, Donald owned “almost every known variation of every known automotive toy. No matter how subtle the difference in detail might be, you would find that variation in his collection. Among collectors, he has been clearly declared the most important force this hobby has ever seen. His name starts and ends toy conversations.”

Donald Kaufman is survived by his wife Sally Kaufman, and his three daughters, Suzanne Meyerhoff Ascoti (husband Vinnie), Deborah Mager (husband David), and Judith Wortzel (husband Gary); as well as a sister, Joan Poultridge; and his former wife Faith. He will be deeply missed by his grandchildren Krista Meyerhoff, Sadie Mager, and Isaac and Zubin Wortzel. He is also mourned by his stepson Jack Roche (wife Barbara and their children Katie and Olivia) and stepdaughter Mary Ellen Simon (husband Harry); and stepgrandchildren Joseph Ascoti, and Rachelle and Roxanne Crocker-Mager. He is predeceased by his brother Richard and leaves behind a legion of loving nieces, nephews and cousins, as well as innumerable friends within the toy-collecting world.

A memorial service for family and friends will be held at 11 a.m. on Sunday, Oct. 18, 2009 at Berkshire Museum, 39 South Street, Pittsfield, Massachusetts. In lieu of flowers, the family requests that donations be sent in Mr. Kaufman’s memory to The Friends of Renal Dialysis Center, c/o the Dialysis Unit at Berkshire Medical Center, 725 North Street, Pittsfield, MA 01201.

Submitted by the Bertoia family.