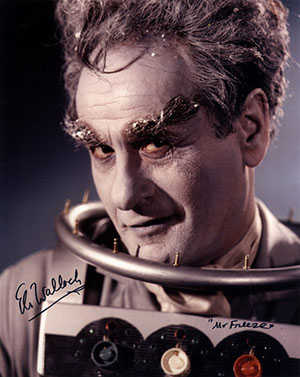 Wallach said one of his favorite roles was that of Mr. Freeze in the ‘Batman’ TV series. He’s pictured in costume in an autographed photo, which will be sold at auction July 12. Image courtesy of LiveAuctioneers.com and IAA (International Autograph Auctions Ltd.).

NEW YORK (AP) – As a masterful character actor and early product of postwar, Method-style theater, Eli Wallach wore countless faces, disappearing into them all. But he was always propelled – in acting and in life – by a mischievousness and an abiding playfulness that made him a tireless performer, an enduring family man and, of course, one immortal scoundrel.

“I never lost my appetite for acting,” Wallach wrote in his 2005 memoir The Good, the Bad, and Me, named after his most famous film. “I feel like a magician.”

Wallach died Tuesday evening from natural causes after 98 years of life, 66 years of marriage and some 100 films, including several he made in his 90s. His son, Peter Wallach, confirmed his death Wednesday.

The versatile, raspy-voiced actor was a mainstay of Tennessee Williams’ plays (he won a Tony Award for The Rose Tattoo in 1951) and an original member of the Actors Studio in the early days of Method acting. But the most notable credit in his prolific career was The Good, the Bad and the Ugly, in which he played the rascally Mexican outlaw Tuco.

As the Ugly of the title, he stole Sergio Leone’s 1966 spaghetti Western from the Good, Clint Eastwood, with lines like: “When you have to shoot, shoot, don’t talk.”

“Everywhere I go, someone will recognize me from The Good, the Bad and the Ugly and start whistling the theme song,” he said in a 2003 interview, referring to Ennio Morricone’s famous score. “I can feel when it’s going to happen.”

Wallach never won an Oscar, but he was given an honorary Academy Award in 2010, hailed as the “quintessential chameleon.”

“I’ve played more bandits, thieves, killers, warlords, molesters and Mafiosi than you could shake a stick at,” Wallach said, accepting the award from Eastwood.

Upon hearing of Wallach’s death, Eastwood remembered him as “a wonderful guy and a wonderful actor. I have fond memories of us working together on The Good, the Bad and the Ugly.”

Wallach also starred in the steamy Baby Doll (1956), The Magnificent Seven (1960), The Misfits (1961) and The Godfather III (1990), in which he played a murderous mobster who dies after eating poisoned cannoli.

Wallach and his wife, Anne Jackson, were a formidable duo on the stage, starring in a series of plays, including George Bernard Shaw’s Major Barbara in 1956 and a hugely successful run of Luv in the mid-1960s. Their partnership was epic by Hollywood acting-couple standards. They played a married couple together as recently as 2003 on the NBC medical drama ER.

“Although I limp in life as a result of my two hip operations, whenever I go onstage with Anne, the lights give my body a lift and I prance onto the stage and dance off,” Wallach wrote in his memoir. “I feel I can play a 16-year-old if the author calls for that. Which is why I prefer live acting to film – I come alive with the lights.”

Wallach met Jackson – also an Actors Studio charter member – while they were appearing off-Broadway in Williams’ This Property Is Condemned. They married in 1948 and had three children, Peter, who became a film animator, and two daughters, Roberta and Katherine, both of whom followed their parents into acting.

Wallach was also great uncle to the New York Times film critic A.O. Scott, an ironic relation, in a way, for an actor who once said: “Having the critics praise you is like having the hangman say you’ve got a pretty neck.”

But his great nephew nevertheless celebrated him, once writing: “With Eli, there is an impish, sly quality, not a self-conscious winking, exactly, but a palpable relish at the sheer fun of acting.”

Wallach was born in Brooklyn on Dec. 7, 1915, the son of an immigrant candy storeowner. Other family members were doctors, lawyers and teachers, but Wallach instead went into acting (he compared it to joining the Foreign Legion). His drama training was interrupted by World War II service in the Army medical corps, in which he earned the rank of captain.

Wallach’s stage career eventually took off, thanks in large part to his success in Williams productions. He appeared in The Rose Tattoo, then Camino Rea and later had a long run in Teahouse of the August Moon.

The Broadway League said Wednesday it would dim its lights Friday for Wallace, “a storyteller in the most specific yet subtle ways.”

Wallach didn’t slow down in his later years. He played a store owner in 2003’s Mystic River, directed by Eastwood, and had parts in the 2006 romantic comedy The Holiday in 2006 and Oliver Stone’s Money Never Sleeps in 2010.

“I don’t act to live,” he said accepting his honorary Oscar. “I live to act.” 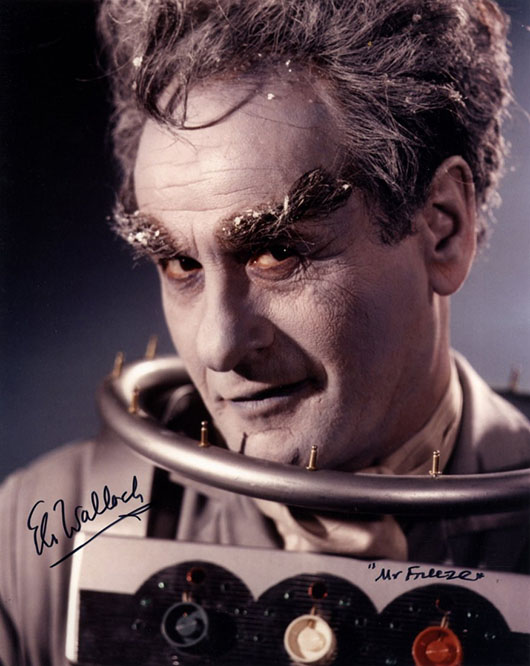 Wallach said one of his favorite roles was that of Mr. Freeze in the ‘Batman’ TV series. He’s pictured in costume in an autographed photo. Image courtesy of LiveAuctioneers.com and IAA (International Autograph Auctions Ltd.).