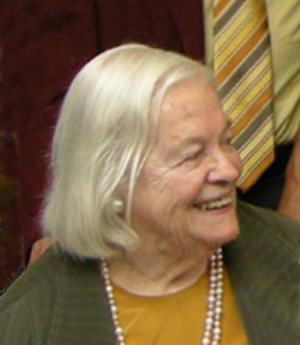 Hella Haasse in a 2007 photo. Image courtesy of Carl Koppeschaar and Erik Baas at nl.wikipedia.

THE HAGUE (AFP) – Dutch grande dame of literature Hella Haasse, who penned the fictionalised biography of Charles of Orleans In a Dark Wood Wandering, has died, her publisher said Friday. She was 93.

“The writer Hella S. Haasse died yesterday (Thursday) at her home in Amsterdam,” publishing house Querido said in a statement posted on its website.

Often called the “grand old lady” of Dutch literature, Haasse’s works were translated and published in 19 countries and included more than 20 novels, a volume of stories, as well as plays and lyrics.

During her lifetime, she was crowned with numerous prizes including the prestigious P.C. Hooftprijs, in 1983, and Prize for Dutch Letters, bestowed on her by Queen Beatrix in 2004.

She was also made an Officer and later Commander of the Order of Arts and Letters by France, the Hella Haasse Museum said on its website, and in 2000 she became an Officer of the Legion of Honour for her work, an “honour few Dutch writers have been given,” the museum said.

Among her best-known work is In a Dark Wood Wondering, published in 1949 in Dutch and translated into French some 40 years later, which tells the story of Charles, Duke of Orleans, who was captured at the battle of Agincourt during the Hundred Year War and taken to Britain as a prisoner.