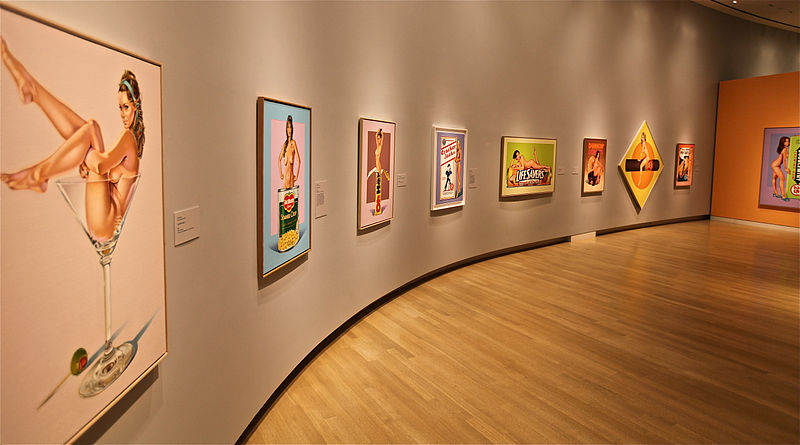 Pop artist Mel Ramos, best known for his satirized pin-up art and often racy depictions of women, passed away on October 14, 2018. According to his daughter and studio manager, Rochelle Leininger, the cause of death was heart failure. He was 83 years old.

Melvin John Ramos was born on July 24, 1935 in Sacramento, California. He mastered his craft studying under pop artist Wayne Thiebaud, before graduating from Sacramento State College with his bachelor and master’s degree. After teaching art at Elk Grove High School and Mira Loma High School, Ramos went on to teach at California State University, Syracuse University, and the University of Wisconsin. When the pop art movement of the 1960s began, Ramos played an important role in the burgeoning new genre. Along with Andy Warhol and Roy Lichtenstein, Ramos’ art was some of the first pop art to be exhibited at the Los Angeles County Museum of Art in 1963. Although he never received the same level of fame as those pop art pioneers, Ramos earned a large following for his paintings appropriating comic book imagery of female superheroes.

Since his first exhibition, Ramos’ has participated in more than 120 group shows. While his work regularly celebrated aspects of pop culture as well as candy, his sexualized imagery of women often led to criticism and controversy. Despite this, his paintings have been shown in major exhibitions and have been reproduced in books, catalogs, and periodicals throughout the world. His work can be found in the permanent collections at New York’s Museum of Modern Art, Solomon R. Guggenheim Museum, and Whitney Museum of American Art. As well as the San Francisco Museum of Modern Art, the Norton Simon Museum in Pasadena, and the Hirshhorn Museum in Washington.

“Ramos was a remarkable human being, artist and teacher. Riding various political and social trends in the art world over the past decades, he remained focused on the act of painting, with passion, awareness and discipline. Aside of Wayne Thiebaud and Ed Ruscha, he was the last of the major first-generation American pop artists,” said Martin Muller, founder and president of Modernism gallery in San Francisco, which has represented the artist for 38 years.

Ramos is survived by his daughter Rochelle, his wife, Leta, and his son, Skot.

Special thanks to our friends at Scoop for sharing this tribute to Mel Ramos.