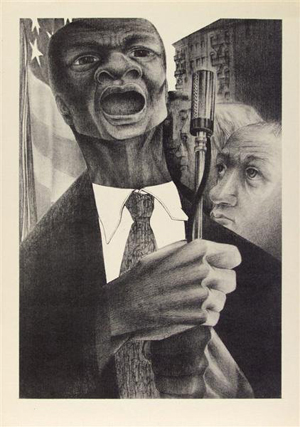 Although better known as a photographer, Roy DeCarava was also a printmaker. This circa-1948 offset lithograph titled ‘Together We’ll Win’ sold at Ashe Auctioneers’ June 28, 2009 sale. Image courtesy LiveAuctioneers.com Archive.

NEW YORK (AP) – Roy DeCarava, a photographer whose black and white images captured Harlem’s everyday life and the jazz greats who performed there, has died. He was 89.

DeCarava died in Manhattan of natural causes on Tuesday, said his daughter, Susan DeCarava. He had been teaching an advance photography course at Hunter College, where he joined the faculty in 1975.

Born in Harlem, DeCarava was considered to be among the first to give serious photographic attention to the black experience in America.

Trained as a painter, DeCarava relied on ambient light, infusing his images with shadows and shades of gray and black – a style that invited the viewer to look closer.

“He photographed for himself, and ultimately produced a body of work that enshrined the social contradictions of the ’50s, the explosion of improvisational jazz music in the ’60s, the struggle for social equity, the bold faced stridency of the ’70s and ’80s, only to turn to even more contemplative realities during the later years of his life,” his wife, art historian Sherry Turner DeCarava, said in a statement.

“His contribution to American photography and culture is manifold,” she added.

Using a 35 mm camera, he chronicled black Americans doing ordinary things: A family watching the Harlem River; a couple dancing in their kitchen; a girl standing on a desolate street in a white graduation dress.

DeCarava worked at a time of enormous creative energy in Harlem, whose many residents included prominent writers, artists and musicians. He spent years capturing candid shots of Louis Armstrong, John Coltrane and other jazz musicians – many taken in smoke-filled nightclubs.

“The Sound I Saw,” published in 2001 and reprinted in 2003, is a collection of his jazz photography.

In 1951, he became the first black photographer to win the prestigious Guggenheim Fellowship in the arts.

In his scholarship application, he wrote: “I want to show the strength, the wisdom, the dignity of the Negro people. Not the famous and the well known, but the unknown and the unnamed, thus revealing the roots from which spring the greatness of all human beings. … I do not want a documentary or sociological statement, I want a creative expression, the kind of penetrating insight and understanding of Negroes which I believe only a Negro photographer can interpret.”

In 1955, he collaborated with poet Langston Hughes on the best-selling pictorial narrative on 20th century African-American life titled “The Sweet Flypaper of Life.”

Some of his works were featured in the 1950 New York exhibition at the Museum of Modern Art, “The Family of Man,” that was curated by renowned photographer Edward Steichen.

Jennifer J. Raab, president of Hunter College, called DeCarava a beloved colleague and teacher who “will long be remembered for his inspiring contributions to the arts and for enriching the lives of generations of students.”
MoMA mounted a retrospective of DeCarava’s work in 1996.

In addition to his wife and daughter Susan, he is also survived by daughters Wendy and Laura DeCarava.

Top contemporary art to be offered at Baterbys, Nov. 7
Scroll to top