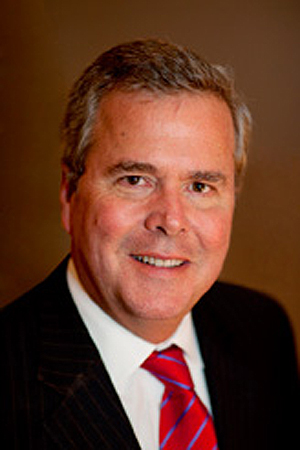 PHILA. (PRNewswire-USNewswire) – The National Constitution Center announced today that Governor John Ellis “Jeb” Bush has been elected Chairman of the Center’s Board of Trustees. His term will begin on January 1, 2013. He will succeed President William J. Clinton, who has served as Chairman since January 2009. Governor Bush’s father President George H.W. Bush served as Chairman prior to Clinton.

“I am honored to have this opportunity and am humbled to follow in the footsteps of my beloved father, President George H.W. Bush, who first exemplified to me what it means to be a good citizen and to uphold the ideals expressed within the U.S. Constitution,” said Jeb Bush, Governor of Florida from 1999-2007. “The National Constitution Center’s mission to improve civic education and engagement and inspire active citizenship is filling a critical void in our country. I will do my best to advance the Center’s mission and continue the vision set forth by President Clinton’s leadership these last three years.”

“Governor Bush’s dedication to education and civic engagement is directly aligned with the National Constitution Center’s mission of illuminating constitutional ideals and inspiring active citizenship,” said Vince Stango, Interim President and CEO. “As we build a world-class museum experience, a national town hall for constitutional discourse, and a top-notch civic education hub for students and teachers, Governor Bush’s leadership will guide us to an exciting, thriving future.”

“The Center’s Board represents a broad spectrum of political views, and Governor Bush’s unanimous election reflects his appeal across party lines,” said Governor Edward G. Rendell, Vice Chairman of the Center’s Board of Trustees. “We look forward to welcoming him as an engaged leader and an active participant in museum affairs.”

Described by The Washington Post as a “successful two-term governor, with a record of reform and an inclusive attitude when it comes to courting voters and governing,” Jeb Bush was elected Florida’s 43rd Governor in 1998, and was reelected in 2002, making him the only Republican in Florida history to be reelected as governor. He has been hailed by President Obama as a “champion of education reform” and a member of a family that “exemplifies public service.”

Prior to serving as Governor, Bush worked in various positions at Texas Commerce Bank in Houston, Texas and Caracas, Venezuela. He also was Secretary of Commerce for the State of Florida from 1987 to 1988. He co-authored Profiles in Character, a book describing 14 of Florida’s civic heroes – people making a difference without claiming a single news headline.

The National Constitution Center is the first and only nonprofit, nonpartisan institution devoted to the most powerful vision of human freedom ever expressed: the U.S. Constitution. Located on Independence Mall in Historic Philadelphia, the birthplace of American freedom, the Center illuminates constitutional ideals and inspires active citizenship through a state-of-the-art museum experience, including hundreds of interactive exhibits, films and rare artifacts; must-see feature exhibitions; the internationally acclaimed, 360-degree theatrical production Freedom Rising; and the iconic Signers’ Hall, where visitors can sign the Constitution alongside 42 life-size, bronze statues of the Founding Fathers. As America’s forum for constitutional dialogue, the Center engages diverse, distinguished leaders of government, public policy, journalism and scholarship in timely public discussions and debates. The Center also houses the Annenberg Center for Education and Outreach, the national hub for constitutional education, which offers cutting-edge civic learning resources both onsite and online. Freedom is calling. Answer it at the National Constitution Center. For more information, call 215-409-6700 or visit www.constitutioncenter.org.