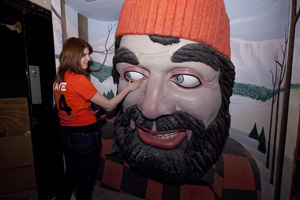 During a nooks and crannies tour, McGroarty ran into Paul Bunyan himself – an exhibit at the museum from years ago. Photo by J.B. Spector, Museum of Science and Industry.

CHICAGO (AP) – Nights at the museum aren’t always as quiet as you’d think. There are parties and corporate events. Sometimes, dozens of kids and their parents are allowed in for one big, fairly sleepless sleepover.

But then the place can go from busy and loud to shadowy and still, almost in an instant. Some people might be spooked.

But not Kate McGroarty.

She grabs her pillow and the quilt her mom made her and heads into the depths of Chicago’s Museum of Science and Industry in search of an unusual place to lay her head for the night. It’s all part of the adventure – one of the big perks of winning the chance to live in the museum for an entire month.

She has, in her time here, slept in a bunk in a World War II era German submarine. She has somehow managed to make a bed on the museum’s huge hamster wheel.

“People always want to know, ‘Are you scared?’” she says. “Have you seen any ghosts?” She raises an eyebrow and grins.

The 24-year-old Minnesotan doesn’t really believe in spooks – though on this particular night, she’s walking at a healthy clip through one of the darker hallways that contains an exhibit of old circus props.

Tonight, she’s headed to the “Smart Home,” an eco-friendly abode on the museum grounds that has everything from heated bamboo floors and electricity provided by solar and wind power to shower tiles made from recycled wine bottles.

She walks up to the master bedroom and spreads the quilt on the bed – “a little piece of home” in this home away from home. A security guard checks in with her once she’s moved in. He makes sure all the doors are locked.

“Sleep well,” he says as he heads back to the museum’s main buildings.

All is quiet, aside from the buzz of cars on nearby Lakeshore Drive.

At the start, McGroarty had little clue what she was getting herself into. Nobody did, really.

This has been a grand experiment even for museum staffers who hatched the plan. They were looking for a new way to market the venerable Chicago institution, and maybe – just maybe – to shed an image that even the museum’s CEO acknowledges had gotten a little stodgy.

One of the world’s largest science museums, with nearly 14 acres of exhibits, the Museum of Science and Industry is probably best known as home to the Apollo 8 command module, the U-boat submarine, various planes and a train, and a coal mine that has been a permanent exhibit since the museum first opened in 1933.

“People often tell me how they visited the museum when they were children,” says David Mosena, the museum’s president and CEO. “I always ask them, ‘So when was the last time you visited?’”

Too often, he wasn’t getting the answer he wanted. Too few had heard about new exhibits, from the Smart Home to “Science Storms,” which features a towering simulated tornado. He and his staff wanted to be edgier to attract a younger audience. They wanted to take a chance.

So this summer, they offered the public a chance to take up residence amid the exhibits, and a $10,000 prize.

Five finalists were chosen from about 1,500 applicants. They were screened, poked and prodded. References and backgrounds were checked thoroughly. They even took a test to evaluate their psychological mettle.

McGroarty passed easily. And it helped that as an actress and writer, she communicated well.

The Chicago press and her growing number of fans swarmed around her when she moved in on Oct. 20. She was, said Rob Gallas, the museum’s chief marketing officer, “a rock star.”

McGroarty has become a human exhibit, on display for the whole world to see, thanks to the frequent updates she posts on Twitter, Facebook and YouTube.

Still, she did not exactly leap at the opportunity to do this. As a kid, she never clicked with science. It took a good 24 hours of thinking about it before she put together her application, a 60-second video and a 500-word essay.

A graduate of Northwestern University’s theater program, she has been an actor since she was 10 years old. More recently, though, she’s focused on writing plays and directing. Now living on Chicago’s North Side, she works side jobs to pay the rent, though she spent some time teaching at a school in the suburbs.

It was the educational part of the museum project that intrigued her – the chance to use her talents to get people excited about learning.

It also fit well with her high-energy personality and the natural curiosity she’s had since she was very young, say her parents, who still live in Roseville, Minn., where she grew up.

“This is the perfect job for her,” says her mother, Mary Sue McGroarty.

Because the museum keeps their daughter so busy, even her parents find themselves having to keep up with her on the social networking sites, just like everyone else.

“Catnaps are my best friend” she wrote in a tweet, hinting at the fatigue she was already feeling on Day 5. Those are the times she sneaks off to her “nest,” as she calls it, two small rooms with a couch, a table, a dresser and a bed, where she usually sleeps and also can escape public view when the museum is open.

Her days have been full – and long.

Up early, she usually starts by blogging and responding to messages from her followers. She then often accompanies schoolchildren to science “learning labs,” and visits exhibits.

She has done a handstand in the simulated tornado. She has enjoyed breakfast with astronaut Jim Lovell, who gave her a personal tour of the Apollo 8 module.

“Jim Lovell – he’s my new crush,” she says, clasping a photo of him tightly.

When friends visit, she steals whatever time she can to wander the museum with them, and that’s when she most sounds like a kid in a candy store: “Oooooh, no one’s on it,” she squeals, running with a college pal to the hamster wheel and hopping on it for a quick spin.

Otherwise, a good part of her day is spent at the “cube,” her glass office on the museum’s main floor. It’s where she does much of her blogging – and where she greets museum guests, some who’ve come to the museum specifically to meet her.

When she’s not there, her younger fans often leave her handwritten notes on scraps of paper.

Another says, “Talk about us on the news & I’ll give you gum. Maybe.”

She is most emotional when she talks about the young people who are following her every move online and who write to tell her about it. That’s why she’s here. That’s when she knows she’s done a good job.

“I think I’m most afraid of not living up to people’s expectations,” she said when she moved in.

But so far, that doesn’t seem to be a problem.

Not that it’s all been perfect. McGroarty jokes that she’s growing tired of wearing the orange T-shirts that have become her uniform, each one emblazoned with the number of the days she’s spent in the museum. (She leaves the museum on Thursday.)

Beyond the schedule, her biggest challenge has been dealing with the crush of media and some of their demands. She has, for instance, refused when a few TV journalists have asked her to set up shots (one wanted to pretend that the crew documented an overnight stay when they really hadn’t).

She’s also simply asked that, at least at times, the video cameras go away because their very presence changes what’s going on. Kids like to mug for the camera.

She takes the job very seriously, and sometimes it wears her down. A good night’s sleep does wonders, though.

She emerges from her Smart Home bedroom rested and smiling and immediately climbs the stairs to the house’s outdoor balcony to shoot photos and some video for her blog.

She also takes a moment to watch the sun rise, a rare treat at a place where she’s often enclosed with no windows.

As she sits down to breakfast – oatmeal, fresh fruit and coffee – the Smart Home’s automated lights turn on.

Kate laughs and shakes her head. Later, she grabs her quilt and other belongings, walks back to drop them at her “nest” and heads to her cube for yet another day.

The museum is waking up, too.

Circus music plays in that formerly dark hallway. More recorded voices can be heard coming from the “You! The Experience” exhibit, which includes the hamster wheel and a popular interactive dance demonstration. “You think you can dance?” can be heard, over and over and over.

At 9:30 a.m., the coal mine whistle blows, and the Museum of Science and Industry opens for business, as a worker unloads boxes of lights for the many trees that make up the “Christmas Around the World” exhibit.

Though Halloween is barely over, McGroarty has the Yuletide spirit. She has described her month in the museum as “so many kinds of Christmas.”

The thing is, she really means it.

She’s also finding out that she really does love science, after all.

Martha Irvine is an AP national writer. She can be reached at mirvine(at)ap.org.

Get ’em by the dozen: More Sphinxes unearthed in Egyptian ruins