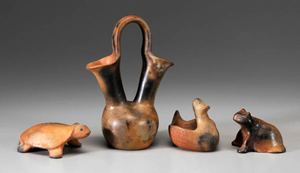 CATAWBA INDIAN RESERVATION, S.C. (AP) – No other group on this earth makes pottery the way the Catawba Indians of York County make it.

Using clay hand-dug from Catawba River banks, Catawba pots and jugs and other pieces are worked and fired by hand with no wheel—nothing but millennia of heritage and DNA and spirits to guide them.

Miniature versions of Catawba pottery are even more rare. Small as thimbles or bird eggs, the tiny pieces that fit in the palm of your hand had disappeared for a century until Edwin “Red” Campbell decided to revive the craft.

Those miniatures live on today, even if Campbell does not.

Campbell, son of the late Catawba master potter Nola Harris Campbell, died earlier this month after a long battle with cancer. He was 59.

But, as former Catawba Chief Gilbert Blue said recently at Campbell’s funeral, “What Edwin did will live forever.”

Chief Blue was talking about the tiniest pots a Catawba has ever made in the scores of centuries the tribe has made pottery. The Catawba style predates the arrival of white settlers in the Americas. It is as old as human beings on this stretch of earth.

Tiny twin-spout wedding jugs unique to the Catawba style were revived by Edwin Campbell. He created many other tiny pottery pieces—pipes, gypsy pots, loving cups— that are of the same style unique to the tribe as the larger, more traditional jugs that are on display at places such as the Louvre and the Smithsonian Institution.

Campbell found a niche with the miniatures and became “famous for his smaller pots,” said Dr. Wenonah Haire, director of the Catawba Cultural Center on the tribe’s reservation in eastern York County.

The jugs were so small that Campbell would fire and harden them in tin cans.

“There are no shortcuts in Catawba pottery,” Haire said. “Edwin had to use his fingers only, the touch of his fingertips, to turn that Catawba River clay into something that will last forever. There are no molds. No wheels—just expertise.”

Many of Campbell’s works are on display at the Cultural Center and in a collection at USC-Lancaster.

Campbell was a carpenter by trade. He was not supported by wealthy patrons of the arts. He made his pottery for the love of it, and because it was part of his heritage as a Catawba.

After the funeral, Catawba Chief Bill Harris spoke of how Campbell had brought back miniature pottery.

“We as Catawba people are proud of what he did,” Harris said. “To bring back that was gone for a century or more, so that the whole world can see the Catawba way.”

Information from: The Herald, http://www.heraldonline.com 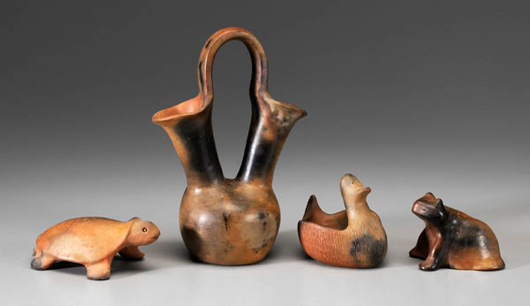