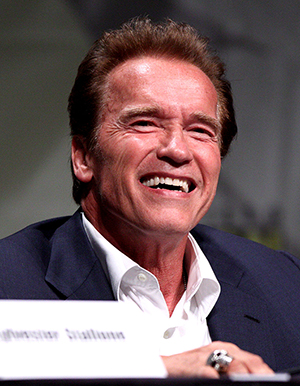 Arnold Schwarznegger at the 2012 Comic-Con in San Diego. Image by Gage Skidmore. This file is licensed under the Attribution-ShareAlike 3.0 Unported license.

SACRAMENTO, Calif. (AP) – An endearing gesture by former Gov. Arnold Schwarzenegger to include an image of his wife Maria Shriver in his official portrait has been covered with a splotch of blue paint.

However, the painting unveiled Monday in the state Capitol has a noticeable patch over the lapel of his blue jacket.

“It was actually a cute gesture when he had it done,” Russell told the Los Angeles Times about the image of Shriver in the painting.

He added, “It’s too bad they couldn’t remove it without creating a smudge that got a lot of attention.”

The realist-style painting by Austrian Gottfried Helnwein was finished during Schwarzenegger’s first term in office then sat on an easel in Schwarzenegger’s Oak Productions office in Santa Monica. He paid for the portrait himself at an undisclosed cost.

After Schwarzenegger left office, embarrassing revelations emerged about an affair he had with his maid that produced a son. Schwarzenegger and Shriver later separated.

True to his outsized life, Schwarzenegger’s portrait is larger than those of other modern-day governors. It measures roughly 4.5 feet wide and 6.3 feet tall and will eventually hang on the third floor of the state Capitol.

It features an image of a youthful Schwarzenegger – a onetime bodybuilder – standing in front of the official California seal. 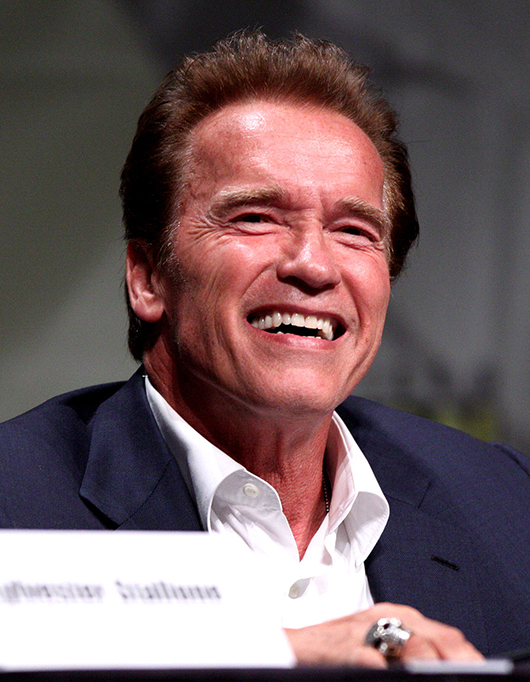 Arnold Schwarznegger at the 2012 Comic-Con in San Diego. Image by Gage Skidmore. This file is licensed under the Attribution-ShareAlike 3.0 Unported license.