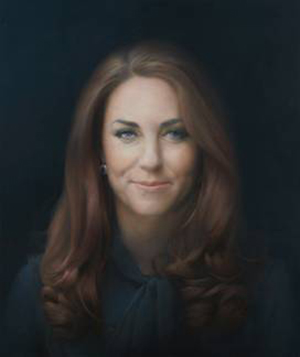 LONDON – The first official painted portrait of the Duchess of Cambridge commissioned by the National Portrait Gallery, was unveiled Friday.

The duchess was involved in the selection process, from which artist Paul Emsley, the 2007 winner of the Gallery’s BP Portrait Award competition, was chosen by Director Sandy Nairne to paint her official portrait.

The Duchess took part in an initial meeting to talk through the process of the painting. This was followed by two sittings, in May and June 2012, at the artist’s studio in the West Country, England, and Kensington Palace. Emsley later made use of a series of photographs produced during the sittings. His subjects are frequently located against a dark background and emphasize “the singularity and silence of the form,” while utilizing a meticulous technique of thin layers of oil paint and glazes.

“The Duchess explained that she would like to be portrayed naturally – her natural self – as opposed to her official self. She struck me as enormously open and generous and a very warm person. After initially feeling it was going to be an unsmiling portrait I think it was the right choice in the end to have her smiling – that is really who she is,” said Emsley.

Following three-and-a-half months of painting, the completed portrait was presented to the gallery’s trustees at their November 2012 meeting.

Catherine Elizabeth Middleton, now the Duchess of Cambridge, was born in Berkshire and attended Marlborough College. The duchess studied at the British Institute in Florence before enrolling at the University of St. Andrews in Fife to study History of Art. She married Prince William of Wales at Westminster Abbey on April 29, 2011. In January 2012, St. James’s Palace announced the duchess’s acceptance of five honorary positions, one of which was a patronage of the National Portrait Gallery. Her first solo public engagement was the opening of its “Lucian Freud Portraits” exhibition and the duchess has shown a keen interest in portraiture and photography.

Glasgow-born Paul Emsley (b.1947) grew up in South Africa before moving to England in 1996. He won first prize in the BP Portrait Award in 2007 for his striking large-scale study of the face of his neighboring artist Michael Simpson. His previous commissions have included the author V.S. Naipaul (2009) and Nelson Mandela (2010). He is represented by the Redfern Gallery of London and is associated with Brundyn + Gonsalves Gallery in South Africa.

HRH The Duchess of Cambridge by Paul Emsley is on display now as part of the Contemporary Collections in the Lerner Galleries, Room 36, Ground Floor, National Portrait Gallery.

Go to www.npg.org.uk to see a special film on the making of this portrait.