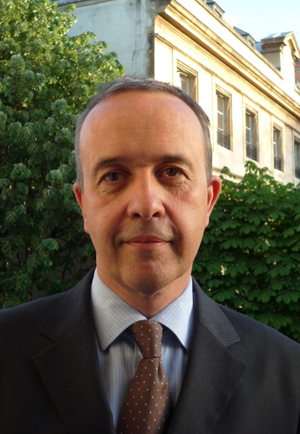 Olivier Meslay. Image courtesy of the Dallas Museum of Art.

DALLAS – Olivier Meslay, a noted and longtime curator from the Musée du Louvre, has been appointed to lead the Dallas Museum of Art’s departments of European and American art. The announcement was made by Bonnie Pitman, The Eugene McDermott Director of the DMA.

During his 16-year tenure at the Louvre, Meslay has held a number of senior positions, including Curator of British, American and Spanish painting. Since 2006, he has served as Chief Curator of Louvre Lens, a satellite of the Louvre being developed in northern France.

“Olivier’s experience as a scholar and curator at the Louvre, his innovative spirit, and his dynamic leadership will make him an extraordinary asset to the museum and the audiences we serve,” said Pitman. “A recognized expert in European and American art, he brings an impressive breadth of knowledge and an important international perspective to our team.”

In his new role at the DMA, Meslay will manage the museum’s extensive collections of European and American art, comprised of nearly 4,000 works including paintings, sculptures and works on paper. He will oversee exhibitions, programs and staff for both departments, working collaboratively with the divisions of Education, Exhibitions and Publications, Collections Management and Marketing.

Meslay will also serve as an advocate of the DMA locally, nationally, and internationally, and will act as the primary curatorial representative of FRAME (French Regional and American Museum Exchange), a collaborative organization partnering 12 regional American museums with 12 regional French museums.

“The Dallas Museum of Art is a remarkable institution with an outstanding international reputation,” said Meslay. “I’ve long been inspired by collaborations with my U.S.-based colleagues, and I greatly look forward to the opportunities of this joint role in Dallas.”

Meslay has organized numerous exhibitions over the course of his 20-year career and is one of France’s leading specialists for American and English art. Before his current appointment as Chief Curator of Louvre Lens, Meslay served as the curator of the innovative “Louvre Atlanta” project, a three-year collaboration with the High Museum of Art that presented in Atlanta a total of seven exhibitions drawn from the Louvre’s collections and which attracted more than one million visitors.

Meslay is a graduate of the Institut National du Patrimoine (1992-1993), the French State School for Curators. He received an MA from the Ecole du Louvre in 1983, having previously received an MA from the Sorbonne in 1982, where he also earned his BA in 1981. Meslay was a recipient of a fellowship at the Clark Art Institute, Williamstown, Mass., from 2000 until 2001. From 1997 to 2006, he was also a professor at the Ecole du Louvre.

About the Dallas Museum of Art

Located in the vibrant Arts District of downtown Dallas, Texas, the Dallas Museum of Art (DMA) ranks among the leading art institutions in the country and is distinguished by its innovative exhibitions and groundbreaking educational programs. At the heart of the museum and its programs is its encyclopedic collections, which encompass more than 23,000 works and span 5,000 years of history, representing a full range of world cultures. Established in 1903, the museum today welcomes more than 600,000 visitors annually and acts as a catalyst for community creativity, engaging people of all ages and backgrounds with a diverse spectrum of programming, from exhibitions and lectures to concerts, literary readings and dramatic and dance presentations.

The Dallas Museum of Art is supported in part by the generosity of museum members and donors and by the citizens of Dallas through the City of Dallas/Office of Cultural Affairs and the Texas Commission on the Arts. Visit them online at www.dallasmuseumofart.org.