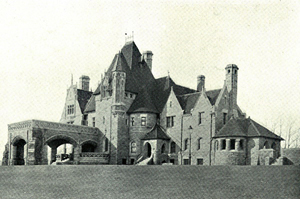 PHILADELPHIA (AP) – The most striking thing about the ornate interior of Woodmont – the French Gothic mansion set atop 73 lush acres in Gladwyne – is not the richly carved stained-oak panels, the massive stone fireplace, the grand entrance hall with its curved stairways, or the figures of saints imported from a chapel in Avignon.

No, it is the deeply felt presence, in every room, of a man who is long gone.

The smiling, mustached countenance of the diminutive Rev. M.J. Divine looks down from the walls in large, framed black-and-white photographs from the 1930s, when his International Peace Mission made national headlines.

The fiery preacher’s old papers are splayed across the large desk in his study, right next to his 1940s-style radio console.

At the head of a massive oak dinner table, Father Divine’s tall English chair and place setting remain next to those of his widow, Mother Divine, now in her mid-80s.

But while the long banquet table is perpetually set with gold-rimmed china for dozens of guests, only a handful of Father Divine’s followers still live at Woodmont. Worldwide, perhaps just a few hundred remain of the once tens of thousands of adherents of the minister, who proclaimed he was God before dying in 1965.

Those dwindling numbers have been matched by the dimming of what had once been an iconic Philadelphia religious movement, raising the question of what will become of the Woodmont estate, a crown jewel of Main Line open space on the National Register of Historic Places.

The best-known of the movement properties that once dotted the city – including the Divine Lorraine Hotel on North Broad Street and the Divine Tracy Hotel in West Philadelphia – have mostly been sold off. No one knows what will happen when Mother Divine dies.

Instead, the highlight of the immediate future is another tribute to Father Divine and the movement’s past – the likely fall opening of a 4,000-square-foot library building on the grounds. It will house the vast collection of papers that the organization has hoarded, as well as memorabilia that may include the wedding dresses that Mother Divine wears on her anniversaries. (April 29 will be the 65th.)

Whether she will be well enough to celebrate is another question. While the native of Vancouver, British Columbia, has been known to sometimes drop in for Sunday public tours of Woodmont, she wasn’t around on a recent visit, and longtime watchers and friends say she may have suffered a stroke in recent years. Followers who answered the phone at Woodmont said Mother was too busy to speak to a reporter.

“Two months ago, we were going over some things, and she seemed frail,” said architect Fred Bissinger, who met with her frequently on the library project. As to the long-term future of the group, “I think for a while it will just sort of keep on going with people that are there,” he said, “but at some point when you get down to five people … I don’t know.”

At a Sunday afternoon open house, an elderly tour leader wearing a red-white-and-blue ensemble who gave her name as Marguerite conceded that new members of the Peace Mission were not coming along.

“We have very strict rules,” she said, referring to celibacy, which ensures no children to raise in the faith, as well as isolation from nonbelieving relatives. “It’s like being a nun.”

Forty-six years after his death, the Rev. Major Jealous Divine remains an enigmatic figure. Historians still are not certain of his real name or his place of birth.

A handsome and fiery African American minister in an era when notions of black empowerment were slowly stirring, Father Divine started gaining headlines by the 1930s for the growing crowds he was attracting, his ostentatious lifestyle, and his frequent run-ins with authorities over financial dealings.

At his peak while based in Harlem, Father Divine had amassed numerous real estate holdings, including a network of racially integrated hotels, and launched a variety of businesses that operated on cash only.

Critics, including publisher William Randolph Hearst, alleged the movement was a cult, in part because it demanded that members cut all ties with relatives. Hearst’s newspapers extensively covered allegations of sexual misconduct and kidnapping within the church.

“The story of the Peace Mission is the story of race in America, because Father Divine was one of the first important early religious leaders who really fought against segregation,” said Leonard Norman Primiano, chair of religious studies at Cabrini College, who became interested in the movement when he ate cheap meals at the Divine Tracy, at 36th and Chestnut streets, as a young graduate student at the University of Pennsylvania. Primiano now runs the online Father Divine Project.

In 1942, legal problems – mainly contempt-of-court charges over an order that he repay a woman who had entrusted her life savings to him – persuaded Father Divine to move to Philadelphia with his first wife, also known as Mother Divine.

After she died in 1946, Father Divine, then thought to be near 70, married 21-year-old Edna Rose Ritchings, who is white. They wed in Washington, D.C., because interracial marriage was illegal in Pennsylvania.

Father Divine said he and Ritchings were celibate.

In 1953, a follower named John Devoute donated the Woodmont estate to the Peace Mission.

Designed for Alan Wood Jr., who owned the Alan Wood Steel Co., and modeled after the famed Biltmore mansion in North Carolina, the Gladwyne estate had been through several owners and fallen into serious disrepair. Many locals think Woodmont would have been demolished if not for Father Divine’s movement.

“We’ve been so delighted by how proud they are of their site and what amazingly good stewards of this important location they’ve been,” said Lori Salganicoff, historic preservation director of the Lower Merion Conservancy.

The estate was a magnet for new followers such as Margaret Faith, now 85 and living in Ardmore. Raised in the Midwest, she was a young woman when she first met Father Divine in 1948. When the preacher moved to Woodmont, she moved there as his personal waitress.

“Everything was honest – no profanity, no promiscuity and things like that,” she recalled.

Feeding people was a central part of the mission.

Guests who have been invited to the monthly Sunday night banquets in the rose mahogany dining room speak in awe of the elaborate floral displays and endless dishes, the platters passed by hand and never allowed to touch the table.

While guests dine under religious figurines imported from France, tapes of Father Divine’s sermons blare from an old hi-fi. Later the banquet-goers begin singing hymns, joined by Mother Divine, seated next to the place setting for her late husband, who is still served a full meal.

For closer contact, visitors can pay their respects to Father Divine, who is buried out back in an ornate mausoleum trimmed in 23-karat gold, even though “it is part of their theology not to talk about death,” Primiano said.

Today, residents of the upscale neighborhood speak highly of their Woodmont neighbors. Alan Wood, a great-nephew of the original owners, lives nearby and frequently visits the estate, which hosted a Wood family reunion in 1992.

“You couldn’t have better neighbors. They always plow my driveway when it snows,” agreed Frank Hopkinson, Wood’s cousin, who lived most of life down the street from Woodmont on Ginkgo Lane. “They would see me digging and show up with a backhoe. They just couldn’t be nicer.”

The new library is as high-end as everything else at Woodmont, with oak paneling, a carved limestone fireplace, and front doors with custom ironwork by a local artisan, Jay Finn.

“The scale and detailing are comparable to many of the better Main Line houses,” Bissinger said.

For Primiano, “it is going to be a really major scholarly resource about that community,” he said.

Someday, it may be all that is left.

Ken Davis recalled “an awkward conversation” with Mother Divine when he was a Lower Merion commissioner about the importance of keeping the estate intact for its historic value and to prevent development.

“Obviously there’s no line of succession. She never had children with Father, the followers are obviously getting older … I just don’t know,” he said.

The only ones who seem unconcerned are the followers. After concluding the tour, Marguerite looked down at the rolling expanse of the estate and said the movement would live on, no matter what happened. “We have Father’s words to inspire us,” she said.

Copyright 2011. Associated Press. All rights reserved. This material may not be published, broadcast, rewritten, or redistributed. 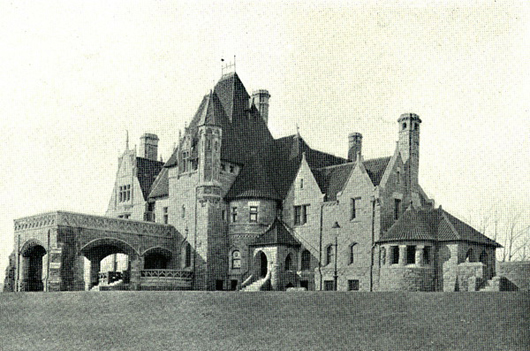 Statue atop Indianapolis monument removed for makeover
Scroll to top