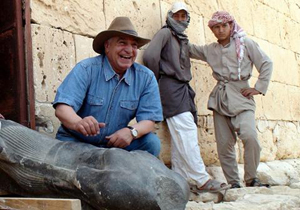 CAIRO (AP) – The man in charge of Egyptian antiquities starred in a TV show about his exploits, sports an Indiana Jones-style fedora and triumphantly declared that the nation’s heritage was mostly unscathed after the revolt that toppled the president.

On Monday, however, he was under siege, the target of angry protesters who want him to quit.

“Get out,” a crowd of 150 archaeology graduates chanted outside the office of Antiquities Minister Zahi Hawass, who threw in his lot with the old order when he accepted a Cabinet post in the last weeks of Hosni Mubarak’s rule.

Whether Hawass, entrusted with preserving Egypt’s museums and monuments, will go the way of Mubarak and resign is uncertain. But the scorn directed him at personifies the messy business of transition in a nation, now ruled by the military, where much of the old governing structure remains intact.

The demonstration in a leafy enclave of Cairo was one of many protests and strikes that have sprung up in Egypt as people voice their grievances for the first time after Mubarak’s heavy-handed reign over the last three decades.

The archaeologists’ protest was also deeply personal, with protesters saying Hawass was a “showman” and publicity hound with little regard for thousands of archaeology students who have been unable to find work in their field.

“He doesn’t care about us,” said 22-year-old Gamal el-Hanafy, who graduated from Cairo University in 2009 and carried his school certificates in a folder. “He just cares about propaganda.”

Hawass has maintained that his first love is Egypt’s heritage, not himself, and that courting publicity raises the national profile.

The rally was raucous but peaceful. Several soldiers blocked protesters from entering the Supreme Council of Antiquities building in the Zamalek district on an island in the Nile that was largely spared the chaos that gripped Cairo. An armored personnel carrier parked in the street, a helmeted soldier poking out of a hatch.

The minister did not appear, and a roar of disapproval swept the crowd when someone said he had slipped out the back door. Then there was a rumor, unconfirmed but no less damaging to his image, that his car had clipped a pedestrian. The protesters dispersed at dusk and promised to return.

The graduates said the antiquities ministry had offered them three-month contracts at 450 Egyptian pounds ($75) a month, hardly enough to survive. They noted that Egypt’s tourism industry is a major foreign currency earner, and yet it was unclear how exactly the government was spending the income.

A foreign tourist spends up to 160 Egyptian pounds ($27) to visit the pyramids of Giza and descend into a tomb there, said 25-year-old Said Hamid. Multiply that, he said, by the thousands who used to visit daily until upheaval drove away foreign visitors and plunged the lucrative industry into crisis.

“Where is the money?” said Hamid, a 2007 graduate who works in a travel agency but specialized in restoration of artifacts as a student.

Unlike lawyers or doctors, who have private options, archaeologists in Egypt mostly rely on the government for jobs. Protesters also complained that less-qualified people secured posts in the antiquities office through “wasta,” which translates roughly as connections or influence.

Hawass’ low profile Monday contrasted with his frequent appearances in the past two weeks, inviting international media to the Egyptian Museum where he displayed artifacts damaged by looters and showed how they had bypassed padlocked treasures from the tomb of King Tutankhamun. On Sunday, he said a full inventory found that thieves escaped with 18 items, including two gilded wooden statues of the boy pharaoh.

Hawass is passionate about his calling, and long campaigned to bring home ancient artifacts spirited out of the country during colonial times. But his flamboyant style is viewed by some as the preening of a self-promoter.

He wears a handkerchief in the breast pocket of his suit jacket, and sells signed copies of his signature explorer’s hat. He featured in a reality-based show on the U.S.-based History Channel called Chasing Mummies, which includes a scene in which an intern gets locked in a pyramid.

The government that employs Hawass is a caretaker one, its lifespan limited as Egypt prepares for elections. On Feb. 1, 10 days before Mubarak resigned, Hawass said in an interview with The Associated Press that Egyptians should give the president a chance to reform.

That was a misjudgment of the hunger for change in the streets, but Hawass inadvertently hit the mark with a personal quotation posted on his website.

“Many people make the mistake of thinking that dreams cannot come true, but they can,” he wrote. “You have to believe, and know that they are more than just imagination.” 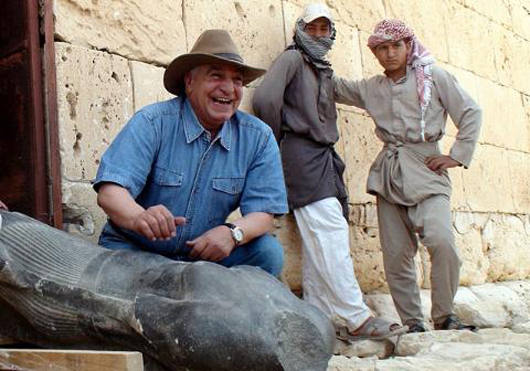