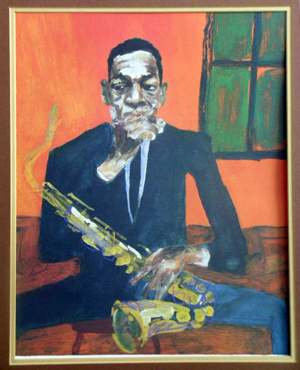 ATHENS, Ga. (AP) – Howard B. Stroud Elementary School students learned recently how award-winning children’s book illustrator R. Gregory Christie creates the pictures that get them to want to read a story from cover to cover.

“There’s a lot of work that goes into a children’s book before the book is done,” Christie told students during a presentation he gave at the school.

Christie’s artwork has graced the album covers of jazz artists from all over the world, including recordings by George Benson and John Coltrane, but the bulk of his work entails drawings and paintings for children’s books.

Most of Christie’s books fall into the multicultural literature genre, which he prefers because he believes it’s important for students to learn about different cultures and the world around them, he said.

Stroud students spent three weeks reading and discussing some of Christie’s books, taking a close look at his style of artwork, which includes oblong human shapes and features, strong lines and vivid colors.

Christie, who lives in Brooklyn, N.Y., came to Stroud after a University of Georgia professor led a class where students studied different children’s books, including some books he illustrated.

“He brings out elements from a narrative perspective that just aren’t present in other books,” said Jennifer Graff, a UGA assistant professor who taught the course.

At Stroud, Christie explained why he selected yellows, oranges and reds, the colors for Jazz Baby, a story about a family who tries to lull a baby to sleep using jazz sounds, then showed students on a flip chart how he created the scenes to go along with each page of the book.

While Christie was drawing, Regina Bell, a family engagement specialist at the school, read the book aloud – using “scat,” an improvisational jazz technique made up of nonsense words and syllables equivalent to an instrumental solo.

“Our kids like rhythm, and they really like music,” Bell said. “Most of them know the book by heart – they can tell you the entire book without reading it on the page.”

Some of Christie’s books highlight lesser-known figures in black history and culture, and give educators or parents a way of discussing tough subjects like war or slavery.

“These books are tools for people to talk about difficult situations and can help open up the door to further their reading,” he said.

Students shouldn’t stop with his books – if they are interested in a person or a certain era, they should pursue it, he said.

“I hope to get you to go to the library and read and develop your minds at this young age,” Christie said.

In 1996, Christie got to paint the illustration for The Palm of My Heart: Poetry by African American Children, which won him his first Coretta Scott King Award from the American Library Association.

He won the same award for Brothers in Hope: The Story of the Lost Boys of Sudan and for Only Passing Through: The Story of Sojourner Truth.

In his book about Truth, a former slave, abolitionist and early advocate for woman’s rights, Christie uses bold, dark colors and rigid lines to recreate the sense of pain and suffering she endured.

Many students learn about Harriett Tubman, who helped conduct slaves to freedom via the Underground Railroad, and civil rights leader Martin Luther King Jr., but few of them ever get to hear the story of Truth, who experienced slavery in New York, Graff said.

“He’s trying to make the unknown known,” she said. “He says we need to break that mold, because there are so many other important people in our history, and we have such a limited sense of history.”

Christie also encouraged students to continue to draw, practice and take pride in their work.

“You have to stand by your work – even if some people don’t like your art,” Christie said. “It’s very important to believe in your own artwork and your own talents.”

Denver to sponsor arts ‘Biennial of the Americas’