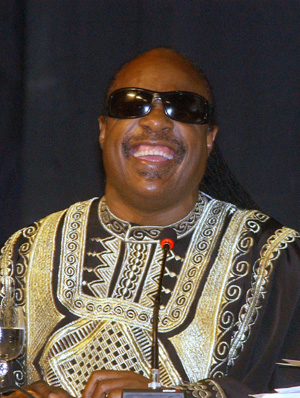 Stevie Wonder at a conference in Salvador, Brazil, in July 2006. This photograph was produced by Agência Brasil, a public Brazilian news agency. This file is licensed under the Creative Commons Attribution 2.5 Brazil license.

Gordy on Wednesday joined Motown legends Stevie Wonder and Smokey Robinson, as well as hundreds of others, to celebrate both the life and legacy of Edwards, who died last week at 91. Gordy clasped hands with Robinson as they entered the church, and the Motown founder held onto Wonder as they exited.

The more than three-hour funeral service at Detroit’s Bethel AME Church featured spoken and sung tributes for Edwards, who held many executive roles with the musical empire that her brother founded in 1959. She was the guiding force behind preserving Motown’s original headquarters and record studio and turning them into a museum.

Wonder spoke before performing a stirring, soulful rendition of one of Edwards’ favorite hymns, His Eye is on the Sparrow, and Sweetest Somebody I Know, an original he said is “so much about her” and which also included some of his hit, Isn’t She Lovely.

Wonder said he was “giving all the praise to God for what she did in my life and the many lives she touched.”

“I think if we all had a mother or sister or aunt or cousin or sister or niece that celebrated and cheered our family as much as she did hers, we’d have a world of unity,” he said. “I am just thanking God that in my lifetime I knew her.”

Edwards’ responsibilities at Motown included managing and guiding the artists’ careers and exposing the famed “Motown sound” to international audiences as director of international operations.

Still, her lasting contribution to the company came after Motown and most of her family left Detroit for California in the early 1970s. She amassed what would become valuable memorabilia and set to work on preserving the old headquarters—a large house on West Grand Boulevard that included the label’s famed Studio A. The museum opened in 1985.

Robinson said Edwards was the only one in the company’s early days who knew Motown was “going to make history,” so she took pictures and saved “every little scrap of paper, every tape.”

“Fortunately, there was Esther, who had our backs,” said Robinson, who introduced himself to the audience as “Smokey Gordy Robinson.”

“Now we have a pictorial and an itemized history of our legacy, right there on West Grand Boulevard,” he said.

Robinson said Edwards wouldn’t tolerate misbehavior, particularly from those closest to her.

“I’m a dude who grew up in the ’hood, right here in Detroit,” Robinson said. “When I was gettin’ down wrong, she would chastise me. You chastise the ones you love. If you let `em get away with stuff, then you don’t really love `em.”

Gordy said his “big sister” was the “glue” for both the Gordy and Motown families.

“And, like glue, everything worth anything stuck to Esther,” Gordy said. “When I was leaving Detroit, I was going around throwing away stuff. Esther was right behind me, picking it up. Little did anyone know that one day that stuff I was throwing away would become a world-class museum.”

Edwards was born in 1920 in Oconee, Ga., and moved to Detroit as a toddler. She was the eldest daughter in a family of eight children.

She first married Robert Bullock, with whom she had a son, Robert Berry Bullock. She later married state Rep. George Edwards and became a step-mother to his son, Harry.

The crowd was full of “Motown soldiers,” as Robinson called them, including the Abdul “Duke” Fakir, the lone surviving original member of the Four Tops, Motown songwriters Eddie and Brian Holland, and Claudette Rogers Robinson, member of the Miracles and Robinson’s ex-wife.

Claudette Robinson told The Associated Press after the service that Edwards was “a personal ally” and a “mother figure” going back to the Miracles’ first days at the nascent company—two years before any other artist.

“She showed such concern, such compassion for the females,” Robinson said. “She wanted to make sure we strived for excellence and we were just being the best we could be.”