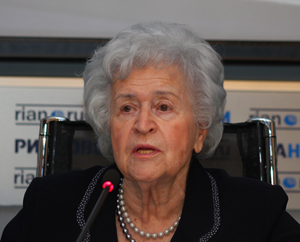 Irina Antonova, retiring director of the Pushkin Museum of Fine Arts in Moscow, 2011 photo by A. Savin, licensed under the Creative Commons Attribution-Share Alike 3.0 Unported, 2.5 Generic, 2.0 Generic and 1.0 Generic license.

The announcement came as a surprise but follows a protracted battle Pushkin director Irina Antonova has waged to return to Moscow a collection of Impressionist art from Saint Petersburg, where it was sent on orders of Joseph Stalin in the 1940s.

“Irina Antonova is a living legend, and she is a person who made the Pushkin Museum into a legend. We are infinitely thankful to Irina Antonova,” said culture minister Vladimir Medinsky.

Antonova will now serve as the museum’s president, a position that has been created especially for her.

“I thank the museum for my life in the museum, for these years, and I thank all of you, with whom I have worked for many years with, I think, some success,” Antonova responded, speaking at a special museum meeting that was shown on television, as the institution’s numerous staff stood up and applauded.

She then proceeded on a tour of the galleries, irritably waving cameramen away from the Titian paintings the museum is currently exhibiting.

The person replacing Antonova is Marina Loshak, curator of various Moscow galleries that Medinsky said will “give a new push and fresh breath to our wonderful and adored Pushkin Museum.”

Speaking to Channel One, Loshak said she will first have to “understand the mechanism” of the museum and not rush through any changes.

Antonova meanwhile exuded confidence that she is still very much in charge.

“You know we have big plans, including creating a museum city, to continue our epic construction,” she said, referring to her project of the museum’s expansion.

Antonova sent a shockwave through Russia’s museum world earlier this year when she bluntly told President Vladimir Putin during his annual nationwide question-and-answer session that Moscow should reopen the Museum of New Western Art closed by Stalin in 1948.

Doing so would mean taking prized exhibits out of the Hermitage Museum in Saint Petersburg, where they have been for more than 60 years.

Fluent in French, Italian and German, Antonova commands huge respect among colleagues abroad and has managed to organise shows of works by the likes of Picasso, Modigliani and Caravaggio which rarely leave their home museums.

In an interview with AFP in June, Antonova gave no indication that she was giving up the fight, saying that “no one else is going to do this” but herself. 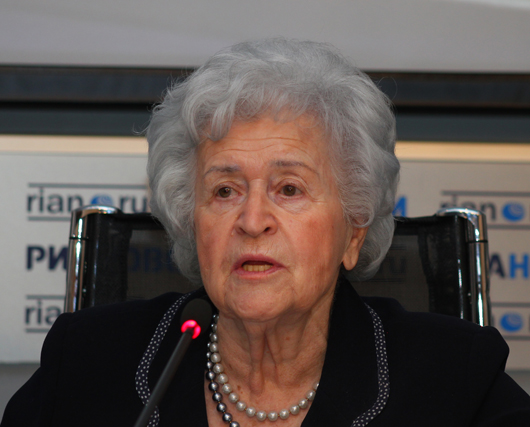 Irina Antonova, retiring director of the Pushkin Museum of Fine Arts in Moscow, 2011 photo by A. Savin, licensed under the Creative Commons Attribution-Share Alike 3.0 Unported, 2.5 Generic, 2.0 Generic and 1.0 Generic license.