Danish furniture was the rage among cosmopolitan Americans in 1960 when Sen. John F. Kennedy and Vice President Richard M. Nixon met in the first presidential campaign debate. The sight of the candidates seated in the TV studio in chairs designed by Wegner affirmed the arrival of Danish Modern in mainstream America. 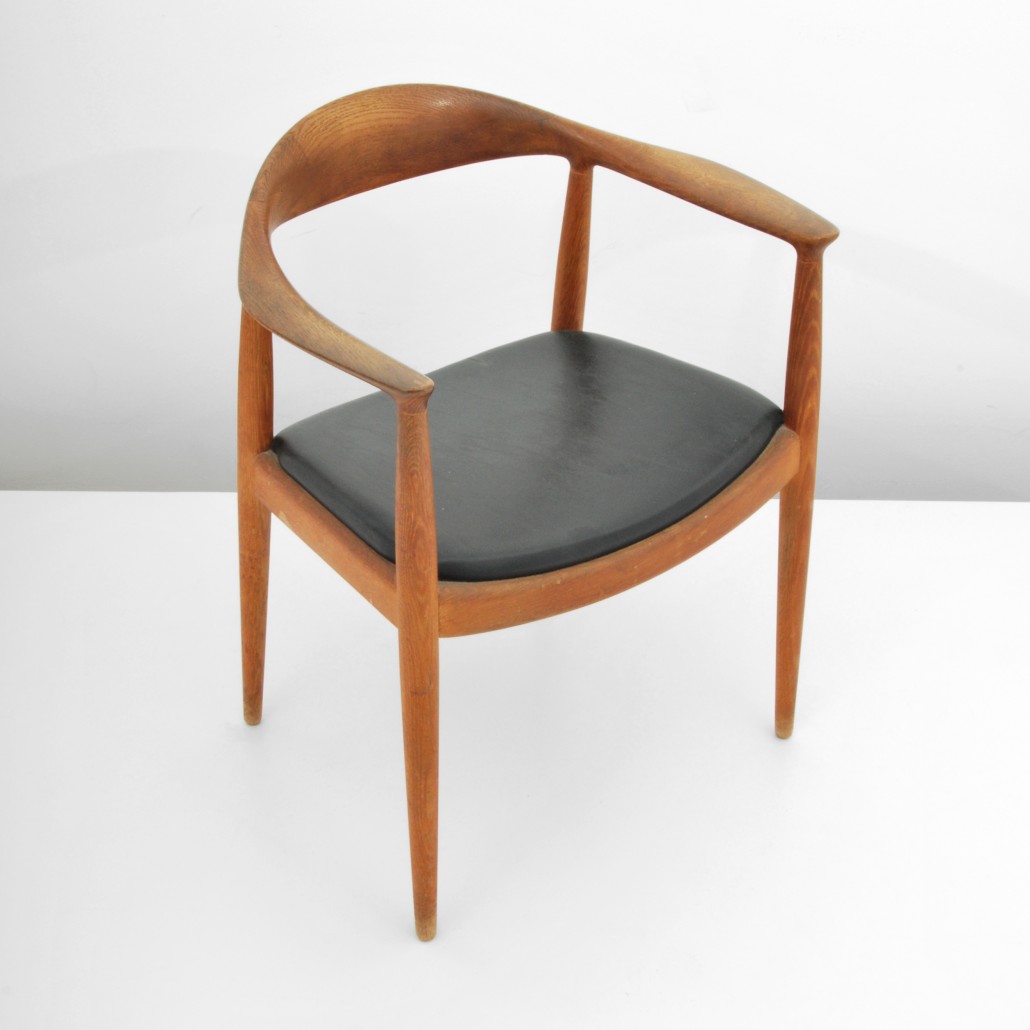 Wegner’s famous Round Chair, also known simply as ‘The Chair,’ was chosen for use at the first Kennedy-Nixon presidential debate. Palm Beach Modern Auctions image.

Wegner’s furniture designs were already highly regarded. Interiors magazine had proclaimed “the Round one,” as Wegner called it, “the world’s most beautiful chair” and featured it on a cover a decade earlier. Ever since its 1960 TV debut, the elegant classic has been called simply “The Chair.”

Wegner died Jan. 26, 2007 in Copenhagen. He was 92. The obituary in the New York Times, written by David Colman, stated that Wegner’s “Danish Modern furniture – most famously his chairs – helped change the course of design history in the 1950s and ’60s by sanding modernism’s sharp edges and giving aesthetes a comfortable seat.”

With more than 500 different chair designs to his credit, Wegner was the most prolific Danish designer. Like his Danish contemporaries Arne Jacobsen, Finn Juhl, Borge Mogensen and Poul Kjaerholm, Wegner took a sculptural and organic approach to furniture, combining high quality and traditional craftsmanship with modernist principles of simplicity and beauty.

Above all, Wegner’s chairs are as comfortable as they are beautiful.

Hans J. Wegner was born April 2, 1914 in Tønder in southern rural Denmark. The son of a cobbler, young Wegner often used his father’s hand tools to carve small wooden ships. Noting Hans’ predilection to wood, his father guided the boy toward a career as a carpenter.

After working several years as a cabinetmaker, the 22-year-old went to Copenhagen in 1936 to study design at the School of Arts and Crafts. One of Wegner’s teachers recognized the young man’s talents and recommended him to famed architect Arne Jacobsen. From 1938 to 1942, Wegner worked for Erik Møller and Arne Jacobsen’s architectural practice designing furniture for the town hall they were creating in Aarhus, Denmark. During this period Wegner perfected his own minimalist style, which was strongly influenced by Kaare Klint, considered the father of Danish design. 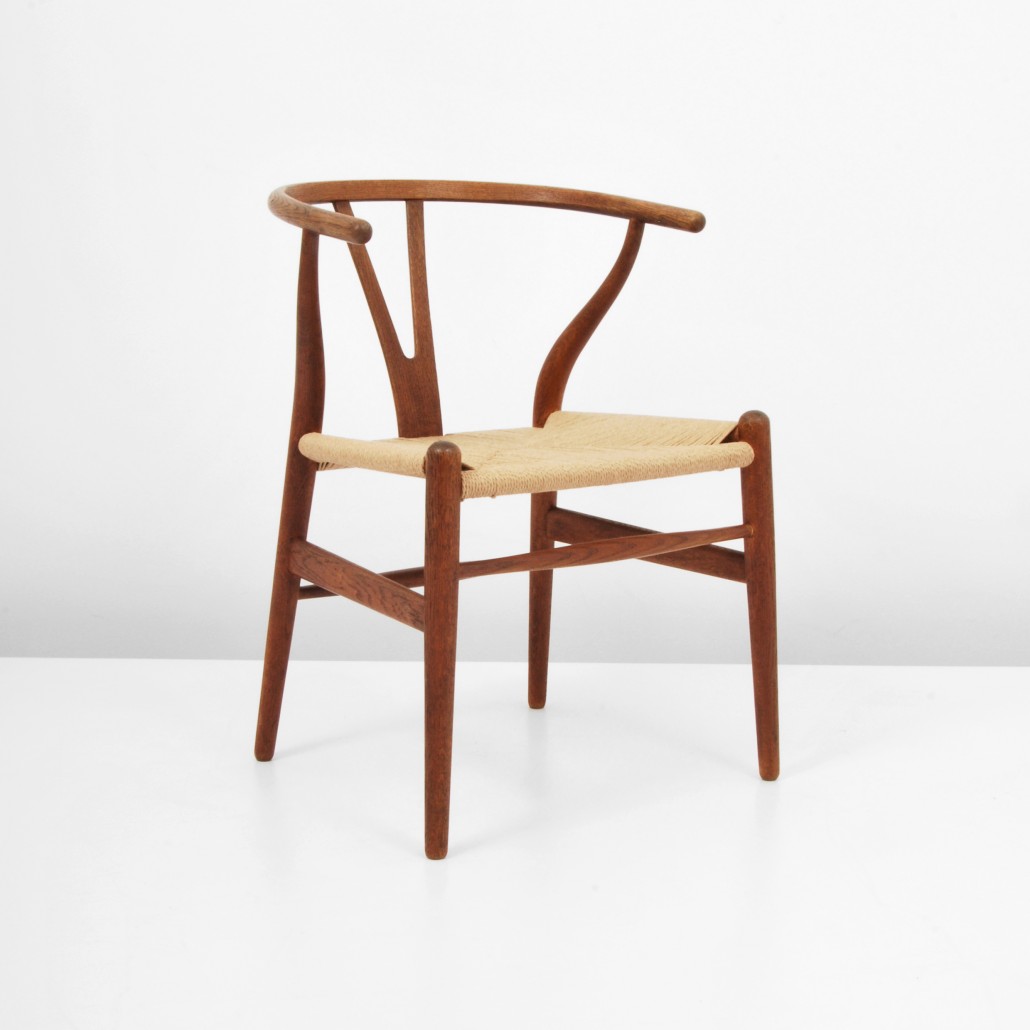 Wegner designed the Wishbone Chair, or Y Chair, in 1949. They were still being made 60 years later. Palm Beach Modern Auctions image.

When the project was completed Wegner opened a design studio and by the mid-1940s had created chair designs for the Fritz Hansen and Johannes Hansen furniture companies.

Wegner’s first masterpiece was the Chinese Chair, inspired by old Chinese chair styles of simple construction. Made entirely of ash, the chair had a rounded, slender frame with a slightly bowed, reclining seat. The elegant design emphasized the structure and quality of the wood.

Another early success was his J16 Rocking Chair, which has been described as a work of elegant simplicity and faultless ergonomics. This traditional spindle-back rocker with a woven cord seat has remained in production since its introduction in 1944.

“Our aim has always been to make things as simple and genuine as possible, to show what we could create with our hands…”

In 1947 Wegner relocated his studio to Copenhagen, where he also lectured at the School of Arts and Crafts. That year he created the Peacock Chair, an updated Windsor chair whose slatted back fanned out to evoke a peacock’s plume.

Wegner introduced his landmark Round Chair in 1949, bringing him international recognition. The strikingly modern design featured one continuous semicircle of wood that formed the arms and backrest.

That year Wegner also designed his Folding Chair. He intended to create a chair that could easily be stowed away, but when hung on a wall it remained a work of art.

Wegner’s designs have been described as understated sophistication. On the design of the Round Chair, Wegner said, “Many foreigners have asked me how we made the Danish style. And I’ve answered that it … was rather a continuous process of purification, and for me of simplification, to cut down to the simplest possible elements of four legs, a seat and combined top rail and armrest” 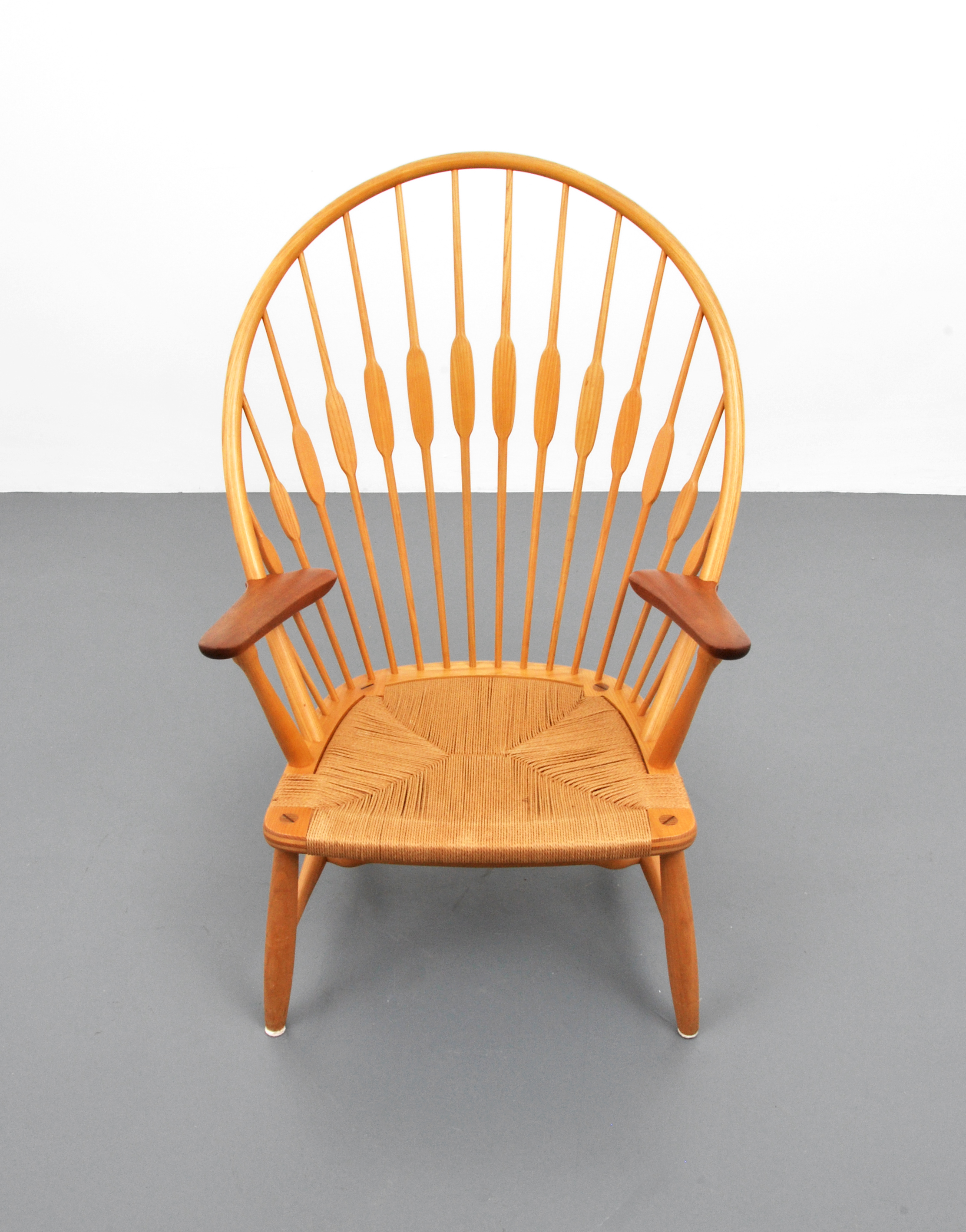 With its large fan-shaped back, the Peacock Chair resembles a Windsor hoop-back armchair without the paint. Designed in 1947, the model JH 550 has a cord seat and is made of ash and teak. Palm Beach Modern Auctions image.

Scandinavian design had its beginnings in the mid-1920s. With an emphasis on natural materials and organic shapes, the Scandinavian design followed the ideals of Arts and Crafts movement. It contrasted to the severity and utilitarianism of Bauhaus designs of that era.

Believing beautiful pieces should be available to buyers of every income, Wegner created simple harmonious designs that were still compatible with mass production.

Wegner might be aghast at the high prices his furniture brings today.

More often encountered is Wegner’s most popular design, the Wishbone Chair, also known at the Y Chair, which usually sells for several hundred dollars apiece. Designed in 1949, it is still made today by Carl Hansen and Son. 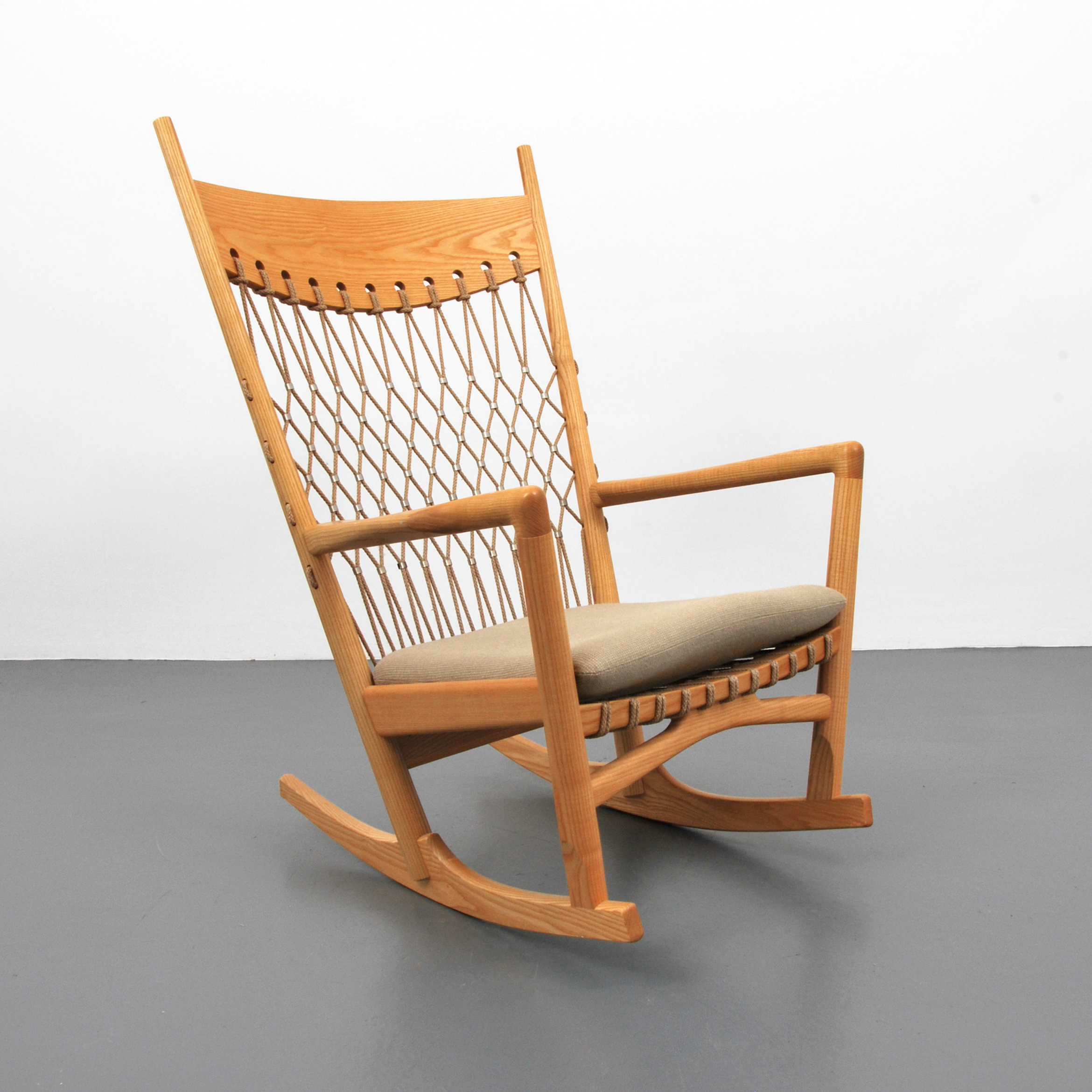 Wegner’s favorite materials were solid oak, beech, teak, ash and maple. It has been written that Wegner had a deep understanding of the nature of wood, its possibilities as well as its limitations, and he demonstrated a fondness for making joints, particularly on the backrests, so beautiful they stood out and became a decorative part of the finished design.

In the 1960s Wegner also worked with laminated wood and metal. A classic example of the latter is his upholstered leather Ox Chair, which is mounted on slender steel legs. The large chair is the form of an abstract bull, perhaps in homage to Picasso and his fascination with that animal.

After a long, productive career that garnered him numerous accolades, Wegner considered himself foremost a woodworker.

“Our aim has always been to make things as simple and genuine as possible, to show what we could create with our hands, try to make wood come alive, to give it spirit and vitality and to appear inherent,” said Wegner.