Twin Palms, designed for Frank Sinatra, is lean and spare. Built in 1947, it was the architect’s first residential commission.
Photo courtesy of the Palm Springs Bureau of Tourism.

The architect was born and raised in the Midwest but became inexorably linked with Palm Springs, Calif., where his cool, modernist designs became the toast of mid-century style. Among his iconic visions are homes which pioneered open floor plans, a relationship with the outdoors and intimate socializing.

“They are party houses, built for entertaining,” said Michael Stern, curator of the Palm Springs Art Museum and a friend of Williams, who died in 2005 at age 95.

Stewart was only 38 in May, 1947, when ascendant crooner Frank Sinatra sauntered into his office. Fresh from filming On the Town, Sinatra wore a jaunty sailor’s cap. Between slurps from a ice cream cone, he asked the architect to build him a Georgian-style mansion—in time for a New Year’s Eve bash.

Williams presented Sinatra with two sets of drawings, one for the Georgian-style home and another for a long, low four-bedroom house in which every room has a view of a large swimming pool shaped like a piano.

Happily, the singer chose the modernist house, vacationing there first with his wife Nancy and three children, and later with his second wife, actress Ava Gardner. Sinatra and Gardner left behind a reminder of their tempestuous relationship, a crack in the bathroom sink made when Sinatra broke a bottle of whiskey on the porcelain during an argument.

Sinatra installed a two-story flagpole on the property, hoisting the Jolly Roger to signal the cocktail hour. As the sun began to set, a pergola over the patio cast shadows on the pool that mimicked piano keys.

“Stew always said the piano was never his intention, although it certainly looks like it,” Stern said.

“Throughout a long and productive career, Williams created stunning, sophisticated homes for the social luminaries of Palm Springs, as well as buildings enjoyed by the man on the street.” 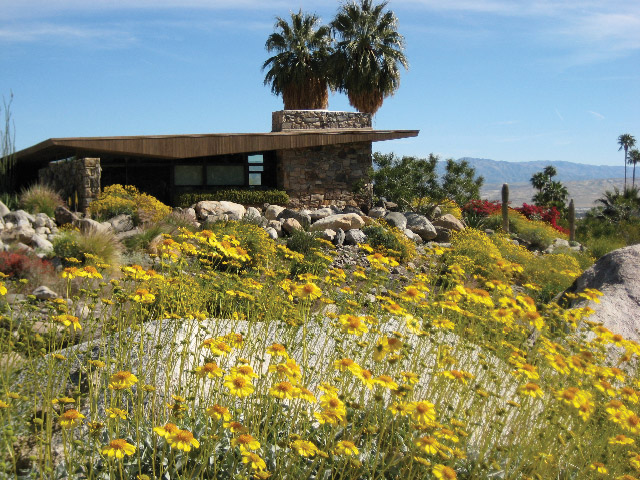 The exterior of the Edris house is clad in wood and stone, with deep roof overhangs to cool the house beneath the desert sun. Photo courtesy of J.R. Roberts.

Perhaps his finest residential project is the gracious and graceful home he built in 1954 for Seattle hoteliers William and Marjorie Edris, recently designated a historic building by the Palm Springs City Council. The Edris house is lean and spare, in keeping with its stark desert surroundings.

“There is not a wasted movement in that house,” Stern said. “Everything flows like the perfect puzzle, each piece fitting together.” He designed his own home in 1956, in a northern enclave of Palm Springs where most of the neighbors were other modernist architects. Mostly wood and glass, the house was pure Williams, with a wide, V-shape roof that created shade for outdoor living and a garden that cascaded into the living room.

“It was a smaller house, beautifully situated, facing the mountains,” said Sidney Williams, assistant curator of the Palm Springs Art Museum and wife of the architect’s son, Erik. “Stew was incredibly sensitive to the outdoors.”

“He brought natural materials to modernism,” said Peter Moruzzi, an architectural historian and founder of the Palm Springs Modern Committee. “He built for the desert, with deep overhangs to shade the house from the sun.” 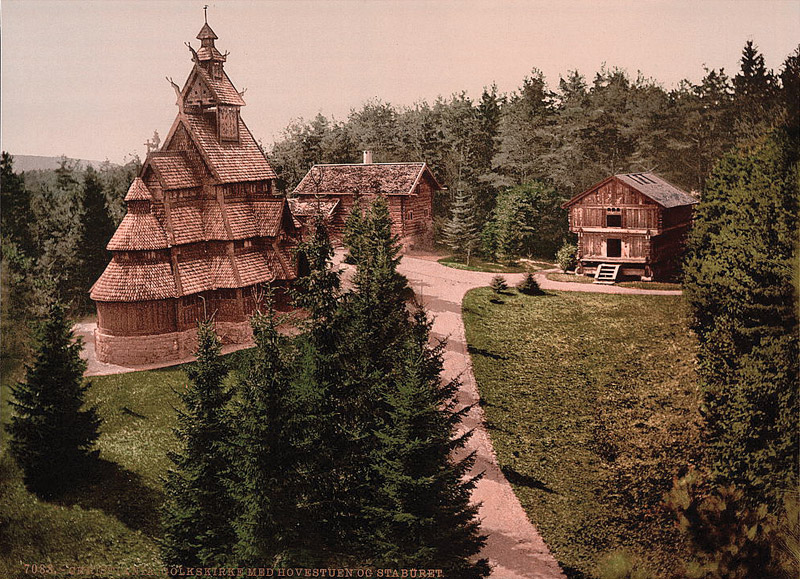 This cathedral in Norway, constructed from indigenous woods in the Scandinavian forests, was a major influence in Williams’ work. Photo Courtesy of Michael Stern.

Wood might have not been the first choice for homes in the desert, where trees are scarce. Williams’ inspiration sprang from the austere cathedrals of Scandinavia, where he studied as a young architect.

“Those churches are all about wood—and he loved them,” Stern said.

The architect’s Scandinavian sensibilities are reflected in the Mountain Station of the Palm Springs Aerial Tramway. Instead of the desert sand, the landscape is dusted with snow. The wood and stone of the exterior mirror the pines and boulders surrounding the site. In 1976, Williams designed the Palm Springs Art Museum, which the architect integrated the structure into a mountain, conjuring the image of the mouth of a pyramid. 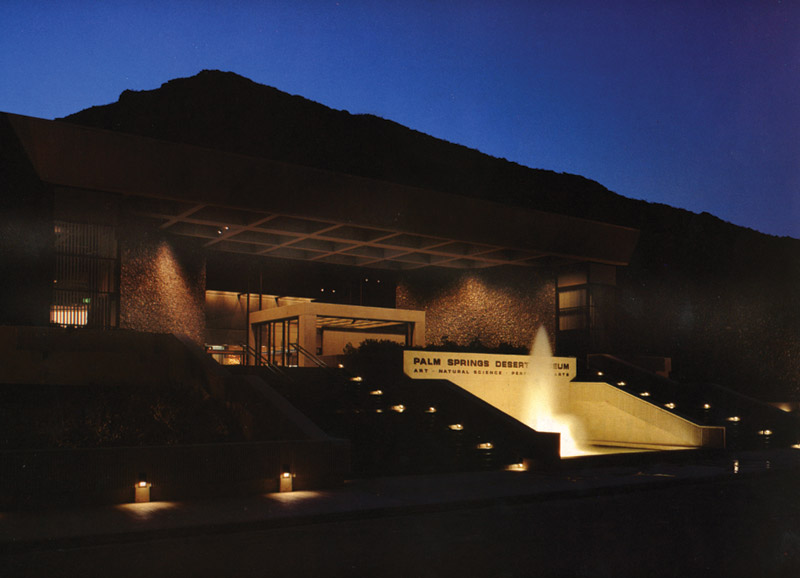 “The rocks on the mountain have a beautiful patina they’ve acquired over the millennia,” Sidney Williams noted. “Inside, the galleries are incredibly friendly to people.”

By them, Palm Spring was evolving from a retreat into a full-fledged city. Building codes prohibited structures more than 35 feet in height. Williams’ creative solution was to place the museum’s outdoor sculpture gardens and theater below grade.

Twenty years later, Williams came out of retirement to draw plans for a third-story addition to the museum. He was 86.

“It was absolutely seamless,” Stern says, “like everything Stew designed.”

Blueprint of an Architect 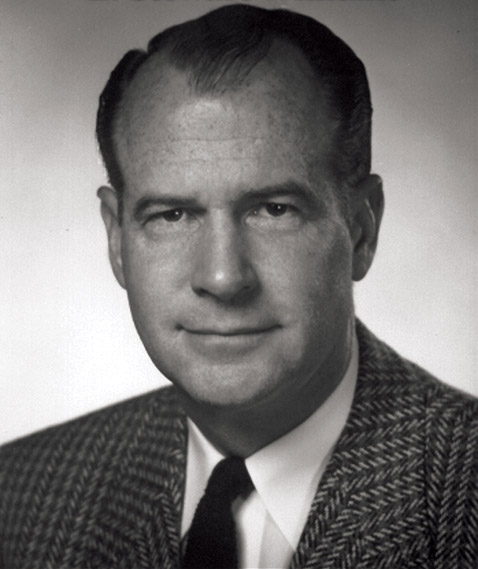 Emerson Stewart Williams was born in 1909, an era dominated by ornate Victorian architecture. Before he reached his 40th birthday, he would design buildings that were sleek and pared down to their essence, as spare as the desert from which they sprang.

“I got to know him late in life, when he was well into his 90s,” recalled Michael Stern, curator of the Palm Springs Art Museum, who has written widely on the modernist movement. “He was a real sophisticate, Ivy League educated, from a very prosperous family.” After graduating from Cornell, Williams toured Scandinavia for six months. He fell in love with both the clean-lined, nature-oriented architecture and a young Swedish woman, Mari, who became his wife of 60 years.

His father, Harry Williams, was also a distinguished architect. In their native Dayton, Ohio, the elder Williams designed a house for the Wright brothers and the headquarters for National Cash Register Company.

In 1934, the wife of the comptroller of NCR invested in a commercial development in Palm Springs, where she enjoyed her winter vacations. She brought in Harry Williams to design the historic La Plaza Shopping Center. He stayed on and was soon joined by his sons, Stew and his younger brother, Roger, in the firm Williams, Williams & Williams.

Throughout a long and productive career, Williams created stunning, sophisticated homes for the social luminaries of Palm Springs, as well as buildings enjoyed by the man on the street, including the Oasis office building, Santa Fe Savings & Loan, Mountaintop Station of the Palm Springs Aerial Tramway, and the entire campus of Crafton Hills College in Yucaipa, California.