When you study the working lives of famous architects, some appear to have been as solitary as a skyscraper, with nameless assistants blending into the skyline around them. 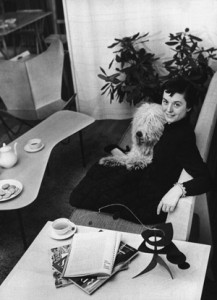 But Florence “Shu” Knoll, the brilliant American architect, interior space-planner and furniture designer, had a gift for collaborating with others and for recognizing and promoting great work.

Florence Knoll helped create, and for a time ran, Knoll Furniture with an elegant steeliness that contrasted with her fetching looks and nickname. She assisted in bringing into form some of the most enduring design products of modernist luminaries like Ludwig Mies van der Rohe, Isamu Noguchi, Eero Saarinen and Marcel Breuer, at the same time producing singular interiors and furniture of her own. Her achievements would have been remarkable for anyone, but for a woman in postwar corporate America, they were extraordinary.

Florence Knoll Bassett was born Florence Schust in Saginaw, Mich., in 1917.  Orphaned at age 12 by the death of her mother Mina (her father, Frederick Schust, died when she was 5), Florence was taken in hand by a guardian who guided her to select a girls’ boarding school. 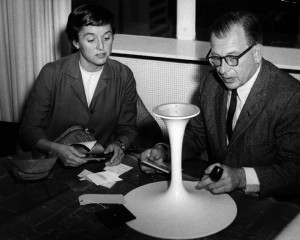 The guardian fatefully chose the Kingswood School, part of the Cranbrook Educational Community, in Bloomfield Hills, Mich., which was presided over by the Finnish architect Eliel Saarinen. With his textile-designer wife, Loja, Saarinen recognized Shu’s talent and brought her under the wing of their family.

Cranbrook presented a holistic approach to design that Florence carried forth with her. At Kingswood, she designed her first house, conceptually complete in every detail, at age 14. She continued her study of architecture at the Cranbrook Academy of Art, at the Architectural Association in London, and at ITT in Chicago.

“Her exactitude could be frustrating for those who worked under her, but the result was worth it.”

In 1943 she was working for Harrison and Abromovitz Architects in New York when she met Hans Knoll, a furniture manufacturer. She went to work for Knoll and began the Knoll Planning Unit, a design group within the company that would set the standard for interior space-planning practices. She married Hans Knoll in 1946 and the company became Knoll Associates.

At Knoll, Florence designed regional showrooms (in New York, San Francisco, Los Angeles, Chicago and Milan) that fluently communicated the Knoll brand and showcased the company’s products with color and great modern style. She is also credited with elevating standards of furniture manufacture to a new level of quality. Her exactitude could be frustrating for those who worked under her, but the result was worth it.

Perhaps most significantly, she brought her relationships with teachers Eliel Saarinen, Ludwig Mies van der Rohe and Marcel Breuer, and friends Isamu Noguchi, Harry Bertoia and Eero Saarinen into the Knoll fold, famously giving them design credit and paying them royalties for their products, a practice unusual in the furniture industry. With Swiss graphic designer Herbert Matter, Knoll helped create a series of inventive print advertisements. 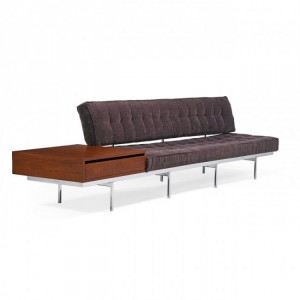 In 1955, Hans Knoll died in a car accident while on a business trip. People assumed the company would close, but Florence became president and Knoll went forward. She married banker Harry Hood Bassett in 1958, selling Knoll in 1959, but stayed involved in the company for several more years.

Florence retired in 1965, but kept her hand in the design world with projects for a few favored clients. In 2003 she was recognized with a National Medal of Arts, and in 2004, she came out of retirement to design an exhibition of her own work for the Philadelphia Museum of Art in 2004.

Curator Kathryn Hiesinger considers herself honored to have been Shu’s last client. “Our exhibition space was small, about 330 square feet. It’s a problematic space, long and skinny, broken up by windows, but Shu domesticated it and made it beautiful,” Heisinger said. “Her solutions were so smart and inventive. The staff called it the Shu-Box. She designed the whole exhibition, down to the last detail. She sent us a list of furniture for the show, illustrated with meticulous color drawings she made of each piece. Mrs. Bassett made at least three trips to Philadelphia in preparation for the show. Everything she did was impeccable.”

Florence defends its ownership of Michelangelo’s David
Scroll to top