During the early ’50s, Ponti explored the concept of an oval table on three legs with a rounded underside and a sculptural void in the center.
Only a few examples with subtle variations were made, including this coffee table of Italian walnut, lacquered wood. Courtesy Wright.

Perhaps it is the very soil of northern Italy, but the region has produced so many artists who can do so many things wonderfully well.

After service in World War I, Ponti completed his architecture degree. Although he continued to explore the creative possibilities of large-scale construction throughout his lifetime, he did not merely settle for working in a traditional architectural firm. Instead, he immediately branched out into industrial design in all its myriad forms, from power plants to fashionable lighting to the dishes on the family table. 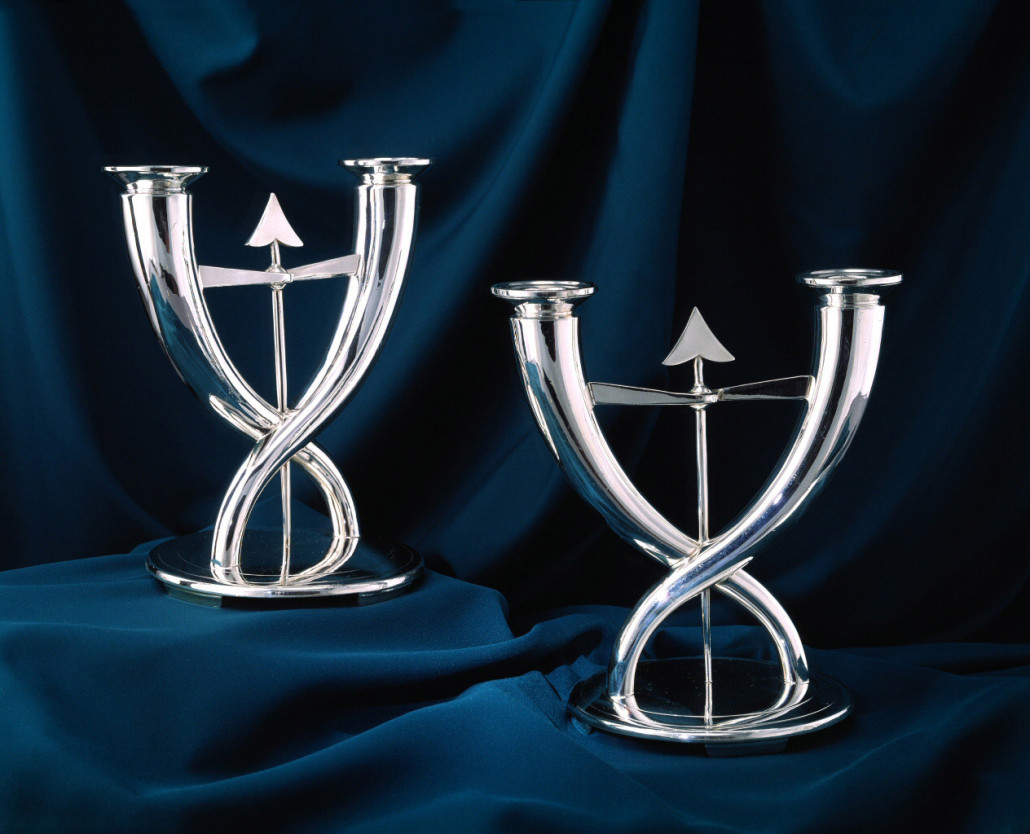 These silver-plated candlesticks in the Fleche or Arrow pattern (H. 10 in) were manufactured circa 1933 by the French firm of Christofle, with which Ponti collaborated for over 40 years. Courtesy Denver Art Museum.

Auctioneer Rico Baca of Palm Beach Modern Auctions has handled many examples of Ponti’s furniture and decorative arts. In an interview with Style Century he explained: “All designers and architects – if they are talented – their creativity really transcends a single milieu. Their minds work a certain way, so if they look at calculators and think the design is poor, they immediately design a new calculator. They produce designs because they have a way of looking at things. When they design coffee tables or silver, it’s just an extension of how they see the world.” 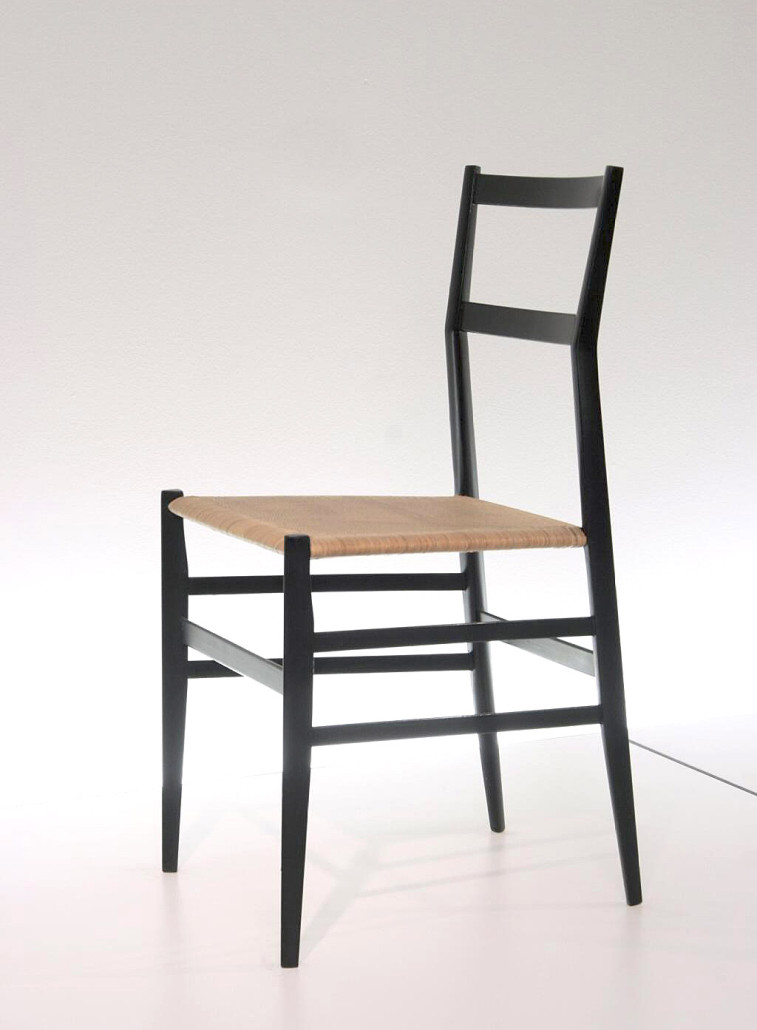 One of Ponti’s best-known creations, the ‘Superleggera’ side chair was designed 1955-1957 and manufactured by Cassina in Italy. Courtesy Denver Art Museum.

Collectors of Gio Ponti works have a dazzling array of choices resulting from a prolific career that spanned six decades. At the top of the pyramid are the completed architectural projects that belong to the world, such as the 1956 Pirelli skyscraper in Milan or the 1971 North Building of the Denver Art Museum. His charming book illustrations and theatrical production sketches for La Scala are pure art. His furniture output ranges from unique studio pieces to mass-produced designs for homes to innovative furnishings for hotels and ocean liners. He exercised his creativity on diverse types of decorative arts – porcelain for Richard-Ginori, silver for Christofle and Reed and Barton, glass for Venini, even bathroom fixtures and fabrics. 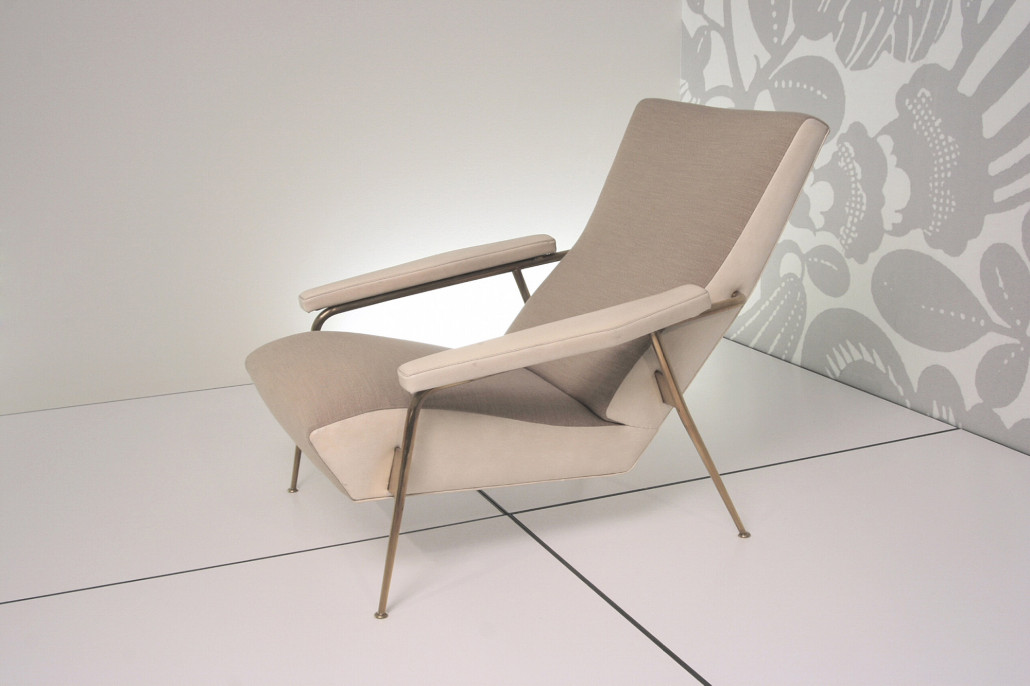 Another popular seating design from the 1950s, Ponti’s ‘Distex’ armchair by Cassina was widely distributed in Europe and elsewhere. Examples of the streamlined seating form frequently turn up at auction. Courtesy Denver Art Museum.

As he worked, he shared his thoughts with other artists in many media, a practice that made his stylistic innovations even more influential. Richard Wright, who has handled many important Ponti works in his specialty design sales, noted, “He was extremely generous – the grand thinker of Italian design for the first half of the 20th century. He was more than an architect, he was everything. From the 1920s to the 1970s, Ponti really helped to create a new vision for Italian furniture design. He founded Domus magazine – incredibly important – you can’t underestimate what he did for Italian design in general.” 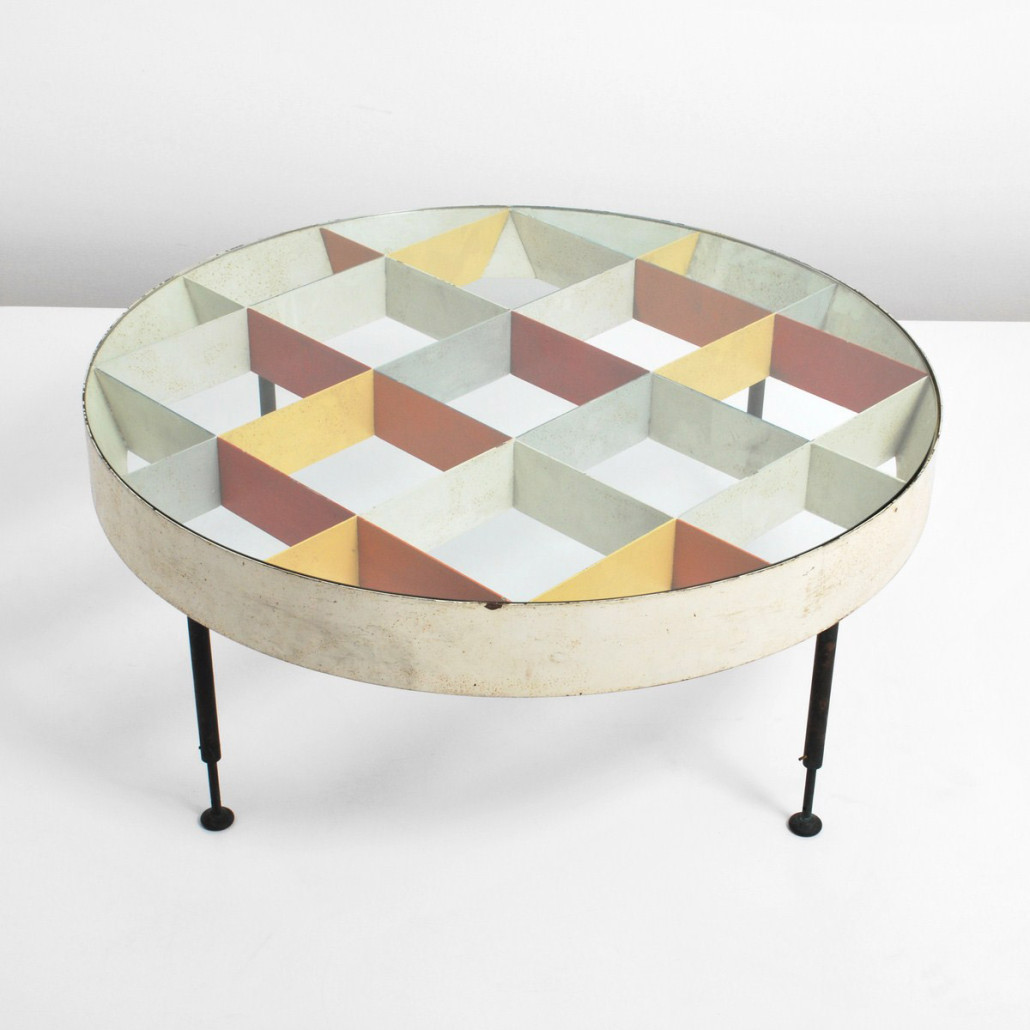 Ponti experimented with a design for a grid-structured circular coffee table throughout his career. There are rare early examples made of wood. By the 1950s, it had evolved into an enameled metal ‘Harlequin’ table illustrated in a mid-decade issue of ‘Domus.’ Colors change from blue and yellow to red and yellow as the viewer walks around the table. Courtesy Palm Beach Modern Auctions.

Yet another way to facilitate an interchange of ideas, Ponti began Domus – the title is the Latin word for house or home – in 1928, and it became Europe’s most influential publication on architecture and design. It is still in existence today. He edited the magazine until 1941, set up a new publication called Stile, then returned in 1947 to edit Domus until his death in 1979. He also influenced future generations as a professor on the architecture faculty of Milan Polytechnic from 1936 to 1961. 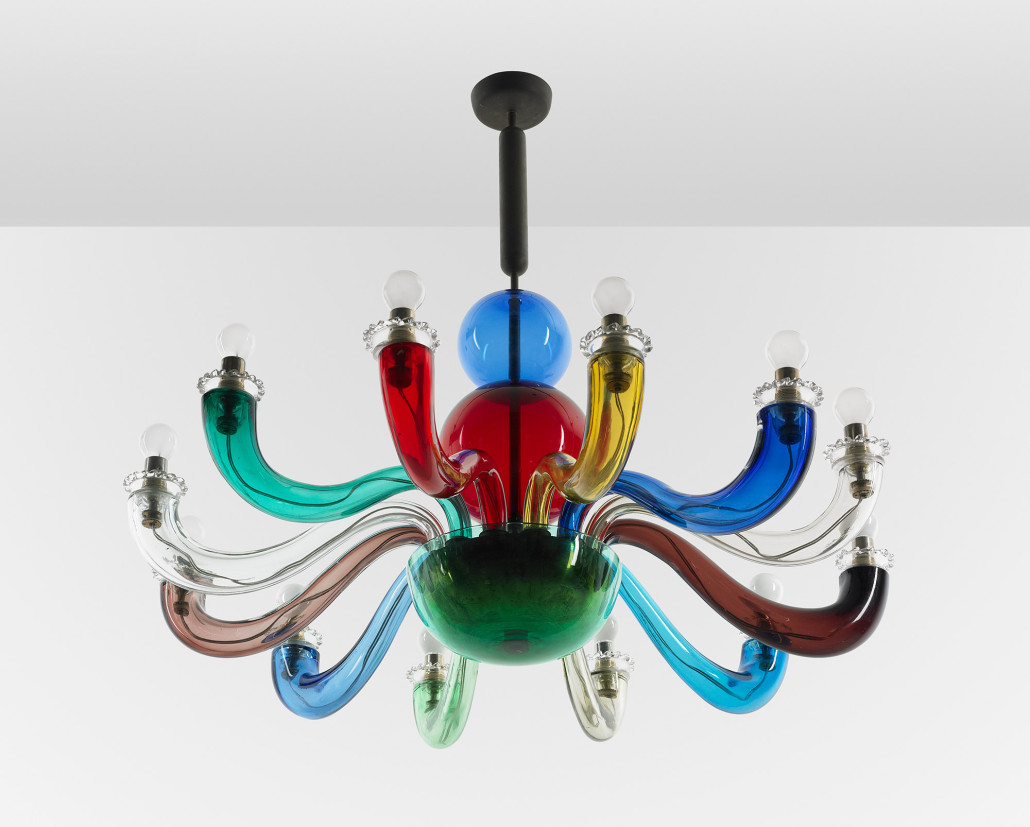 In the late 1940s, Ponti had a fruitful partnership with Paolo Venini and his Murano glassworks. In addition to colorful glass bottles and vessels he called ‘divertimenti,’ he created this iconic 12-arm chandelier. This example was owned by Ponti and installed at his vacation home in Liguria. As the Wright auction catalog noted: ‘Theatrical but not overly extravagant, amusing but also wholly functional, this chandelier exhibits a refinement that is distinctly Ponti.’ Courtesy Wright.

Wright continued, “The big divide is the custom furniture compared to the production furniture. The very best pieces are custom and have a documented provenance. The custom pieces obviously bring much more money, because of the higher level of craftsmanship. They are unique or very rare. The best ones we handled came out of South America, where he did homes for Italian ex-pats. That was very exciting material; we had the original drawings. We handled some pieces he did for his daughter Lisa Ponti. Those unique, one-off works coming directly from the family which commissioned them are at the top.” 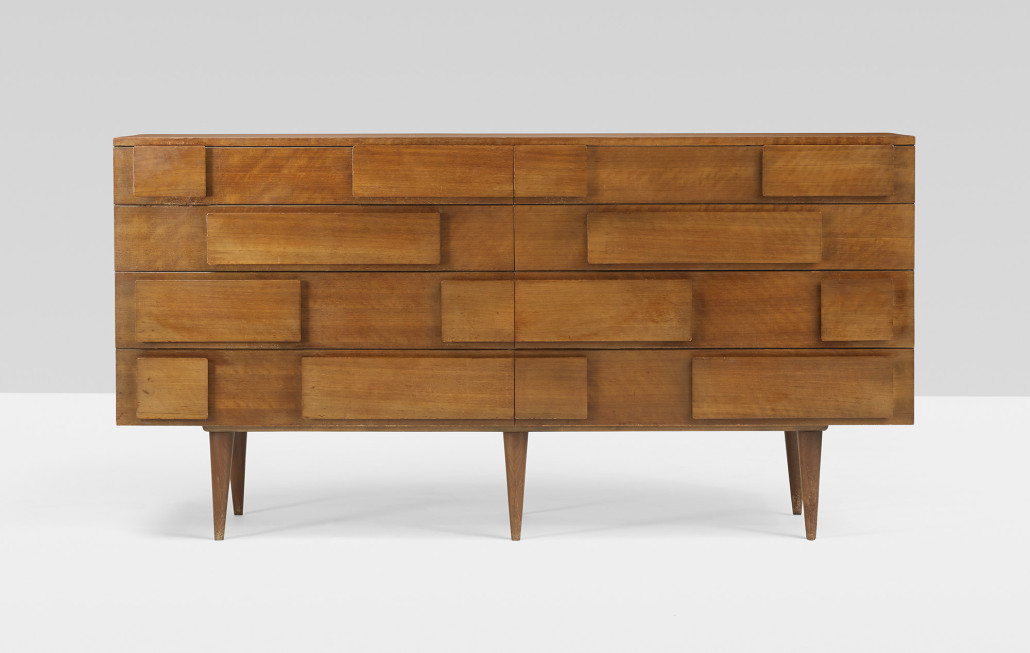 In the 1950s, Ponti created furniture designs for M. Singer & Sons, New York-Chicago. This Italian walnut cabinet with eight drawers (W. 72 in) appears in the firm’s catalogs from that era.
Courtesy Wright.

More affordable are the special designs – beds, tables, chests – which he created for specific hotel or cruise ship projects but were produced on a large scale. So Wright assures collectors, “You can engage with Ponti at a lot of different levels. There are ceramics that he designed in the 1920s and 1930s for Ginori. … There are some widely produced furniture designs that he did for Singer & Sons … He did glass, he did some silver. He collaborated with Paolo Polli. He did wonderful little animals in copper and enamel. Some of those are relatively inexpensive.”

“His furniture output ranges from unique studio pieces to mass-produced designs for homes to innovative furnishings for hotels and ocean liners.”

Rico Baca concurred, “With all those unique pieces, the most important thing is that they have to be treated as art. When you start to talk about art, you need to consider provenance, and if there’s no provenance, the value is much less. Of course, we try to do the research work for the buyers prior to the sale. There’s a client who only wants the real thing – for status and for investment. They feel comfortable spending $75,000 on a desk because they know that it’s worth that. One of my favorites was that harlequin coffee table we sold, because when you would walk around the piece, different angles revealed a different group of colors. We’re always looking for one-off items by Ponti or things that have stellar provenance. When those come in – you see the items in person and touch them – there’s a special feeling and a distinctive style to the whole piece.” 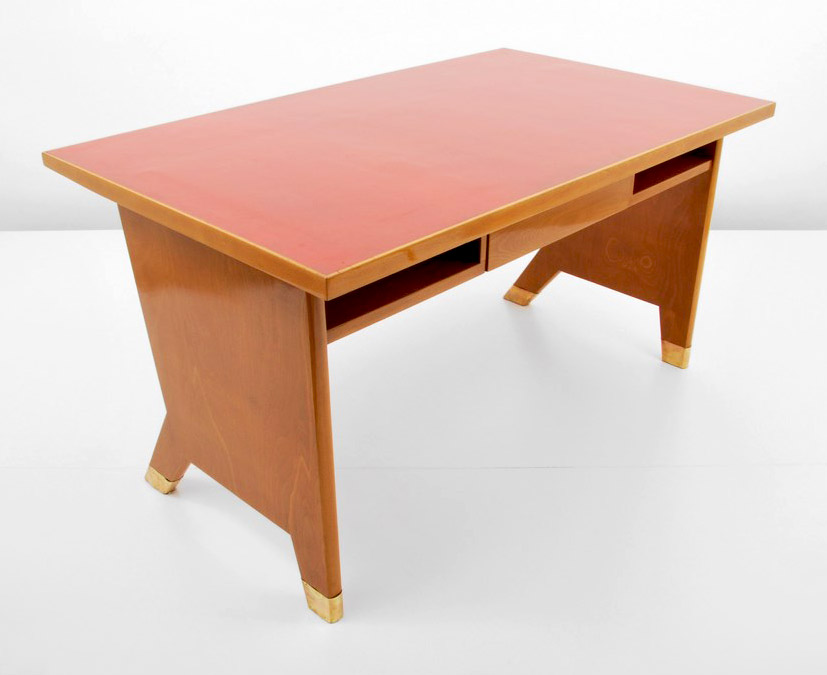 Fortunately for collectors, Ponti’s descendants have produced a definitive reference and an on-going archive against which individual pieces can be verified. Auction catalog entries for unique or custom pieces should include a confirmation, such as “Sold with a certificate of expertise from the Gio Ponti archives.” Gio Ponti: The Complete Work, 1923-1978 by the designer’s daughter Lisa Licitra Ponti contains a comprehensive survey of the architecture and design he created. A well-known art and architecture critic, she collaborated with her father from 1940 until his death in 1979. The book description notes: “The entire photographic archive of Ponti’s studio, together with his unpublished writings, were made available for the first time for the preparation of this book. There are many new photographs of his work and a broad selection of his letters, diaries and essays. A biographical profile, bibliography, and chronologies of works, exhibitions and sales round out this stunning book.” Although pricey, copies of the English translation do come on the market. 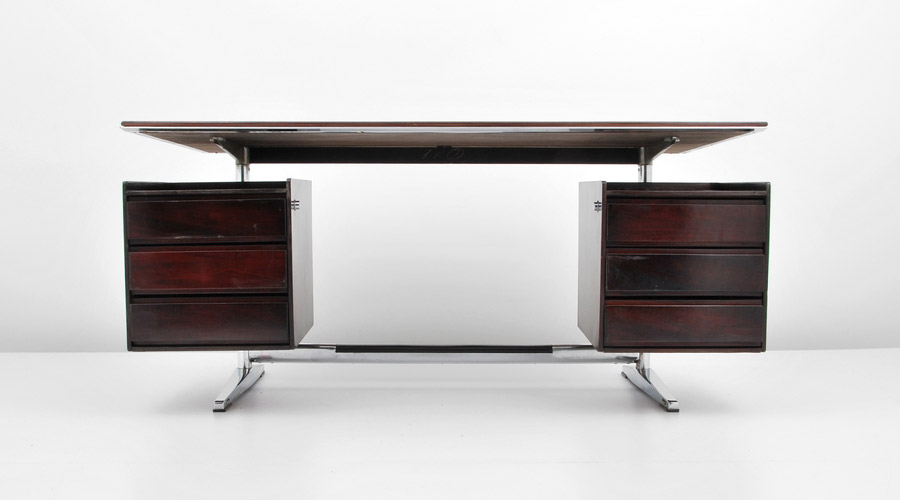 A Ponti design for a floating rosewood and chromed steel desk was part of a group of furniture commercially produced by Rima in Padua, Italy. Courtesy Palm Beach Modern Auctions.

In the mid-1980s, Lisa Ponti reorganized the Ponti Archives, which are located in the Milan building designed by Gio Ponti, where he lived and worked. And since 1996, grandson Salvatore Licitra has continued to maintain the data collection. Best of all, much of the information is now available online in English and can be accessed by anyone at www.gioponti.org/en/archives. The archives are visual and a researcher can scroll through architecture and design grouped chronologically. Around 1930, for example, we see lighting and furniture for Fontana Arte, table utensils for Krupp, a stately house in Milan, a luxury cabin on an ocean liner, and a funeral chapel side by side. Also online, there is a biography, news, a store section, and a description of 99,900 letters – sent and received – which have been indexed at the archives.

In addition to his daughter’s comprehensive survey, there are dozens of books and exhibition catalogs devoted to Gio Ponti’s works – in Italian and English – which examine particular areas of his long career. Notable among them is a book of essays by Ponti himself titled In Praise of Architecture; copies of the English translation of the Italian original can be found through used booksellers.