Cleopatra had all the luxury goods the ancient world could offer – but the Queen of the Nile did not have to carry her own stuff.

Handbags arose when women took charge of their own lives and had to have their personal possessions on call wherever they travelled. A superhero backpack will do the job, but elegant women want a well-designed carryall that compliments their sense of style.

The Hermes family built a reputation in the 19th century for its sought-after saddlery, made to order for aristocratic riders. Established in 1837, the leather goods workshop first made harnesses and bridles for carriages. In 1880, Charles-Emile Hermes moved the firm to the Rue du Faubourg Saint-Honore and added a line of saddles. The flagship store remains at that location today, and the Equestrian line still offers equipment for the horse, the rider, and the stable. 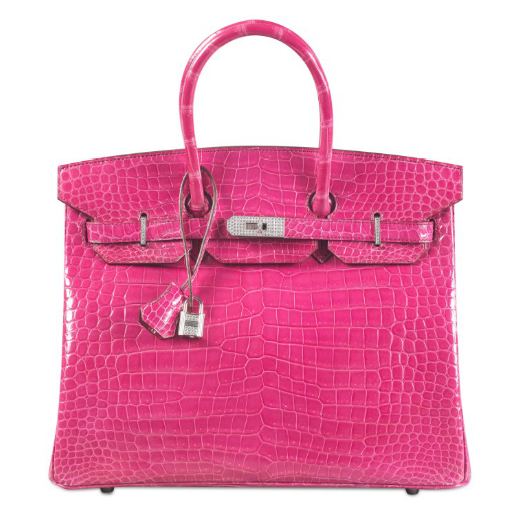 Gilding the lily, this Shiny Fuchsia Porosus Crocodile Birkin 35cm has a catch and padlock of 18K white gold, studded with diamonds. The over-the-top handbag sold for $222,928 (HK $1,720,000) in a 2015 Christie’s Hong Kong sale. Courtesy Christie’s

By the 1920s, their offerings in fitted cases and carrying bags for sporting events were expanded to include the production of ladies handbags. The sac a depeches – later known as the “Kelly Bag” for its association with Grace Kelly – was introduced in 1935 and the famous and fashionable silk scarves in 1937. Hermes Paris today, while still based on leather goods, has stores throughout the world which offer everything from jewelry to fragrances to home goods and a website with the familiar cart to fill. 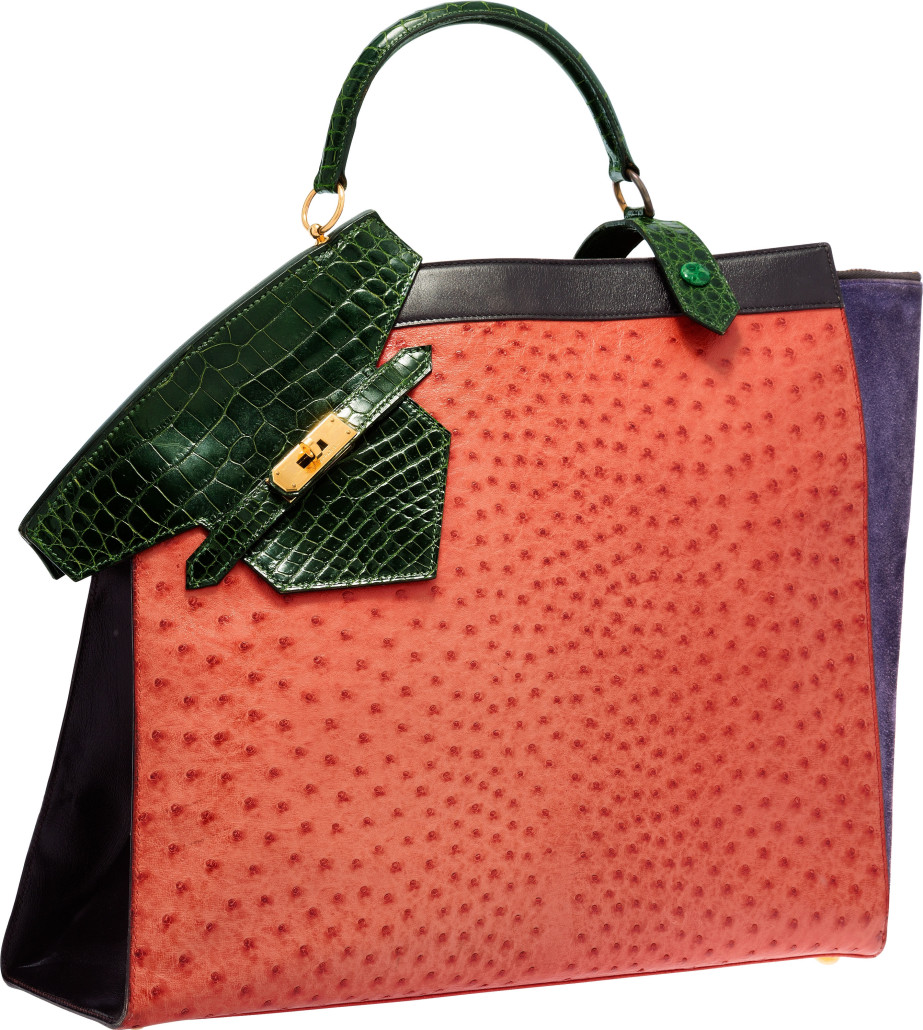 A vintage bag from 1982, the Sac Himalaya is a rare special creation from Hermes. The leathers in vibrant colors include red ostrich, emerald alligator, violet suede, and black calf. Courtesy Heritage Auctions

The five-figure auction market for Hermes handbags, however, has developed in response to the demand for certain models, unattainable through normal channels due to the restrictions put in place by the exclusive company. Max Brownawell, Senior Specialist in Luxury Accessories for Heritage, explains: “With certain styles – Birkins and Kellys being the best known – people can’t just walk into Hermes and buy them. Hermes has very restrictive selling policies. If you want to go in and buy a Birkin, you have to be a long-standing client. You would have to have a relationship with a salesperson, and they would have to offer it to you. That’s what’s interesting about the Hermes market. Buyers will spend two to three times the store price in order to avoid the whole game at Hermes, of having to develop a relationship and wait to be offered a bag.”

A little more information on the celebrated names the handbags carry. In a 2013 Marie Claire article, “Hermes: History of the Iconic Brand in Numbers” by Fiona Raisbeck, she wrote about the Kelly: “Hermès kicked off the craze for naming handbag styles after celebrities. In 1956 a picture of Grace Kelly showed the silver screen icon using her Hermès Sac à dépêches bag to shield herself from a scrum of paparazzi photographers and so the style was renamed the Kelly. Each Kelly bag, like most Hermès designs, takes from 12 up to 18 hours to make.”

Unlike other categories of vintage clothing and jewelry, the Hermes market is driven by rarity and brand name, not by age or provenance.

Hermes’ most desirable bag, the Birkin, is named after English actress and singer Jane Mallory Birkin, OBE (b. 1946). Based in France for much of her life, her fascinating career has included record albums and appearances in many important independent films, although late night television fans will recognize her from a role in the Agatha Christie film “Death on the Nile” (1978). Many projects were completed during her liaison with the multi-talented Serge Gainsbourg, which produced their actress daughter Charlotte. But in 1981, a chance plane-seat encounter with Hermes head Jean-Louis Dumas led him to design a new leather carryall, big enough for weekend supplies, and now the handbag is better known than its first owner. 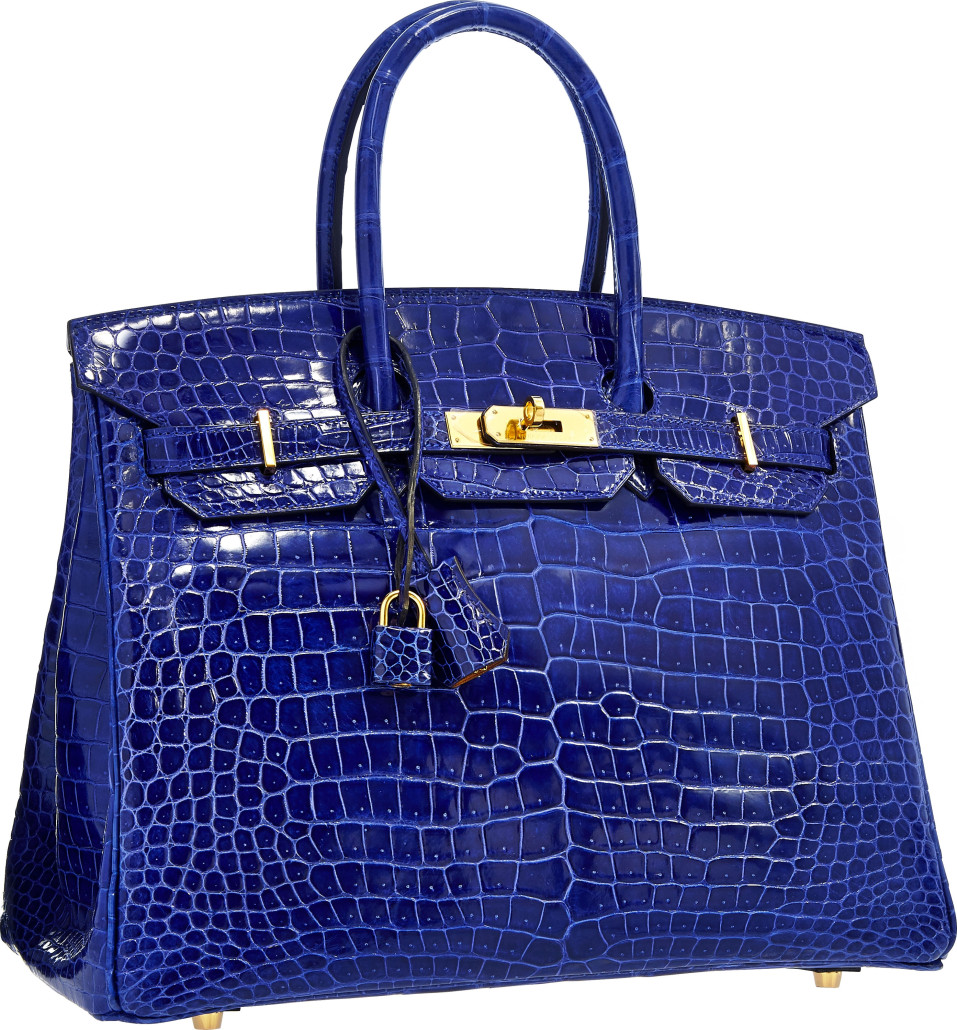 The Hermes Birkin, which comes in various sizes, distinctive colors, and leather combinations, is what wealthy women want most and, right now, the best way to acquire a new, mint-in-box example is through major auction houses. Expect to pay five-figure prices, some bring even more. Christie’s acquires bags in confidence for private clients, has set up a regular “Handbag Store” on the website, schedules online auctions, and now offers live catalogued sales. Two have been held in Hong Kong, one in Paris, and the first New York “Handbags and Accessories” sale will occur on December 11, 2015. 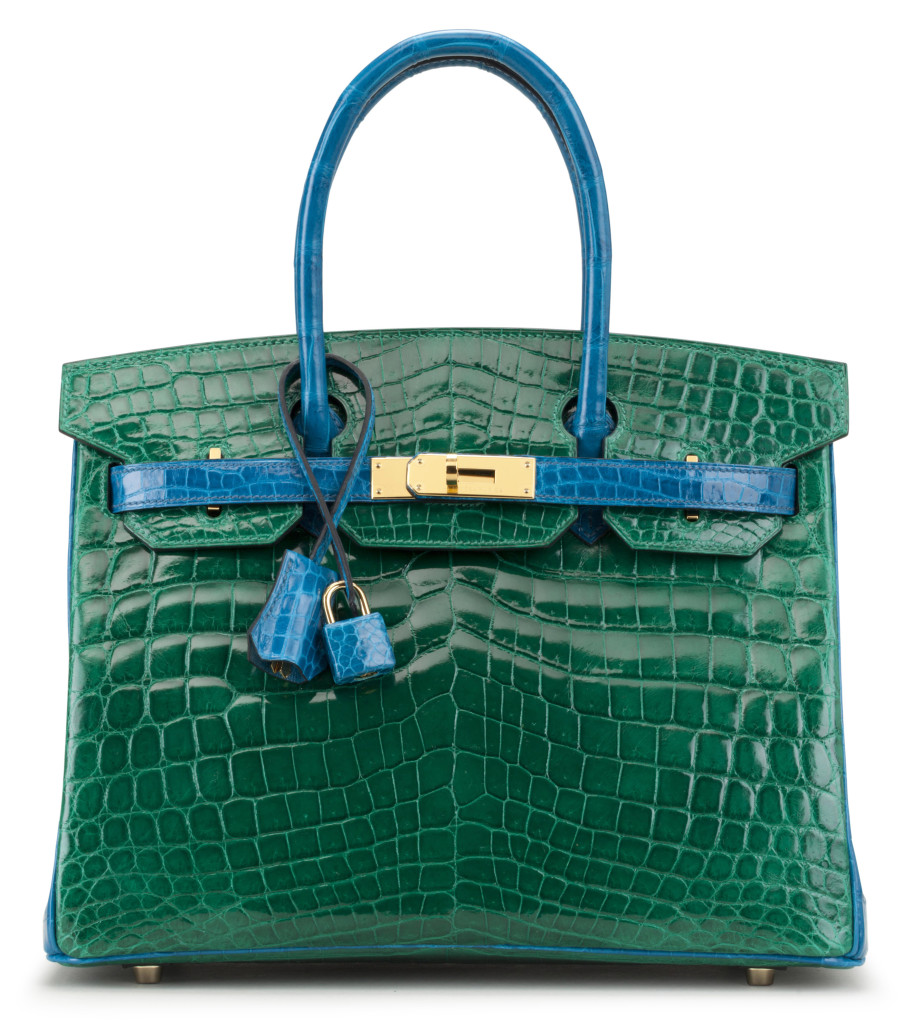 Unlike other categories of vintage clothing and jewelry, this is a market driven by rarity and brand name, not by age or provenance. Hermes leads the way, with a measure of participation by other top firms such as Chanel and Louis Vuitton. Heritage’s Brownawell outlines how it works: “About 90% of our Luxury Accessories Signature Auctions by value is in Hermes. The things we look for the most in consignments are bags that are brand new, straight from the store. Those are what bidders really like, those achieve the highest bids. We have printed catalogues at these sales; that’s one of our principal tools for bringing in bidders – and they’re gorgeous, we work very hard on them. With bags, it’s actually one of the few areas where provenance doesn’t mean much. Unless it’s Jane Birkin’s Birkin or Grace Kelly’s Kelly, the provenance doesn’t actually add that much value.” 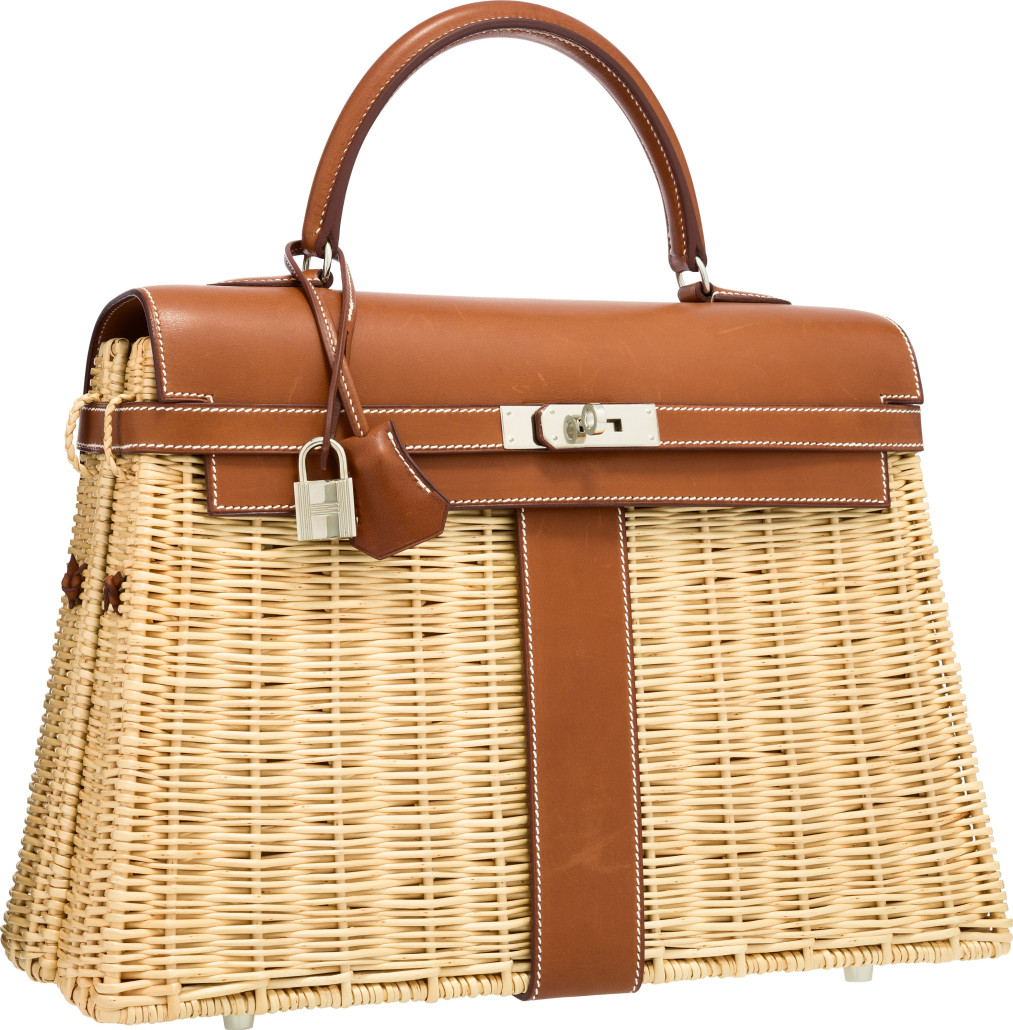 The 35 cm Picnic Kelly in leather and wicker with Palladium hardware was part of a 2011 Hermes Limited Edition. Courtesy Heritage Auctions

Caitlin Donovan, Christie’s Specialist in Handbags and Accessories, says, “Most of the bags in our live auctions will be pristine, in their boxes with the original protective plastic on the hardware. We do have a number of vintage pieces in wonderful condition. There’s a different market for a vintage Kelly than there is for a brand new pristine Birkin. Hermes bags are made so well, they’re made to last. That’s a testament to the firm’s equestrian heritage – they made saddles and bridles. They were made to be used, not sit on a shelf in someone’s incredible closet. They still have that attention to detail and quality in the bags. You see examples from the 1970s and they look brand new. The stitching is intact and the leather has a beautiful patina, the dyeing is so even, it doesn’t fade over time.” 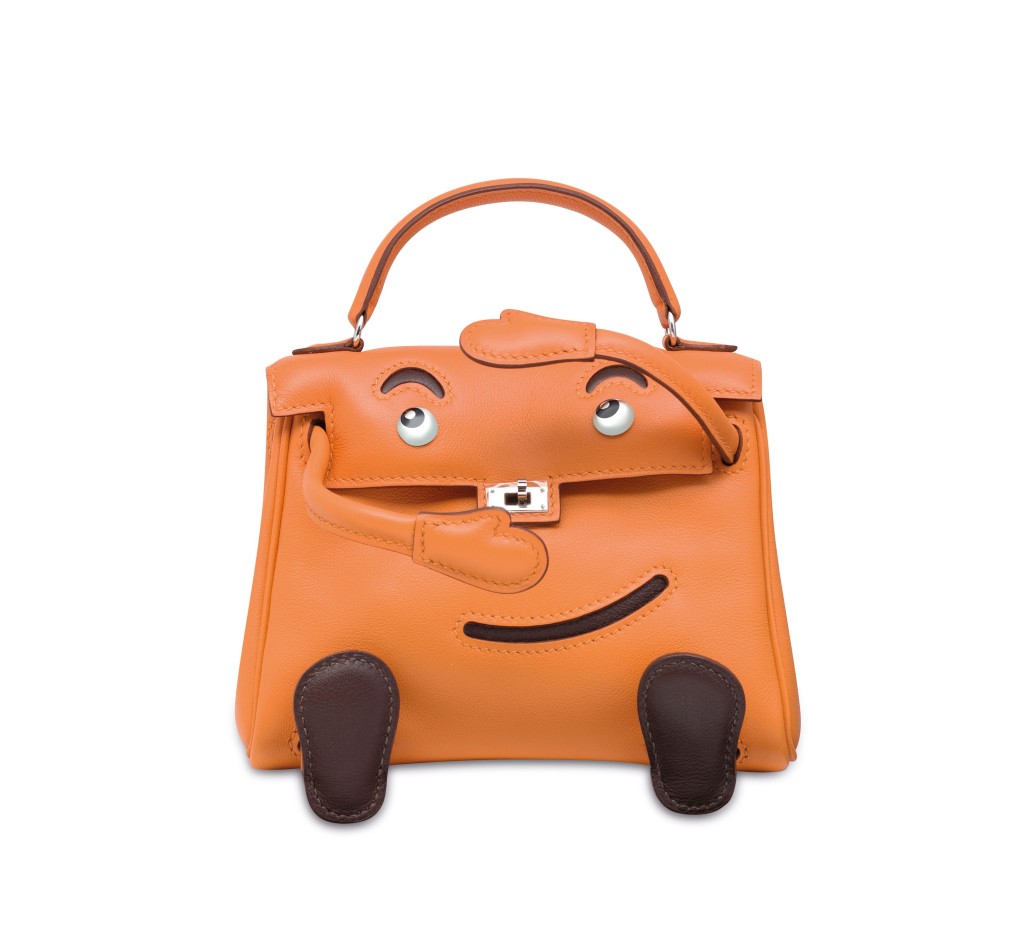 The diminutive bag Hermes called Quelle Idole – a play on Kelly Doll – was a playful production which now has a life of its own. An smiling orange Gulliver leather example, Taipei Limited Edition 2009, sold at Christie’s Hong Kong for $97,207 in 2015. (HK $750,000). Courtesy Christie’s

Donovan sees a developing demand for Hermes bags in smaller sizes as clients replace larger Birkins with 30 cm or even 25 cm ones: “People are going back to the idea of smaller, ladylike bags. There’s a trend across the entire bag market. We’re the only female-centered category in the auction world, and, although they are an investment, at its core the market is based on fashions which change. Independently wealthy women realize that if they’re going to spend $40,000 on a crocodile Birkin, in a couple of years they can probably get most of that back. They are one of the few items that couples prestige in the present with investment value for the future.”