A pair of thinly-carved and polished spinach green jade bowls – D. 8 ¾ inches – sold at a 2015 Gianguan Auction in New York for $48,400. On the recessed base was a Yongzheng six-character reign mark, Qing Dynasty. Courtesy: Gianguan Auctions.

Jade is at the center of a story of money and magic that goes back over 8,000 years.

In China, its use dates back to the Neolithic period, between 6000 and 5000 B.C. The mysterious bi discs and cong vessels found in burials of this period testify to its ritual significance. Confucius (551-479 B.C.) said, “The wise have likened jade to virtue” and went on to link its various strengths to human qualities. Difficult to find, almost impossible to work with tools, the mineral’s pull on the heartstrings began early. Then and now, jade displayed the owner’s wealth and also served as a protective talisman to ensure longevity and good fortune.

After 10 years of headline-grabbing prices, the market for Chinese jade – both objects and jewelry – remains complex and difficult to navigate. Buyers who appear discriminating and highly selective at one moment can be maddeningly capricious at others. Museum criteria are not always valid. Neither age nor appearance nor history guarantees a sale. Emotion may trump reason on the auction floor. When a particular object speaks to more than one bidder – when they must have it in their life – rational estimates are left far behind.

“Ultimately, it’s going to be the great-color, beautifully carved older pieces that are going to bring the big money.”

Beginning in the 17th century and continuing into the 20th, Europeans, and later Americans, formed collections of Chinese art, including jade. Much of what they gathered entered the permanent collections of museums. As part of the centennial celebration of their Asian Art department, the Metropolitan Museum of Art organized “A Passion for Jade: The Heber Bishop Collection,” a 2015-2016 exhibition of a hundred examples. When the patron of the arts donated his jades to the museum in 1902, it was considered so important that the Metropolitan re-created Heber’s ornate ballroom as a gallery to display the collection. 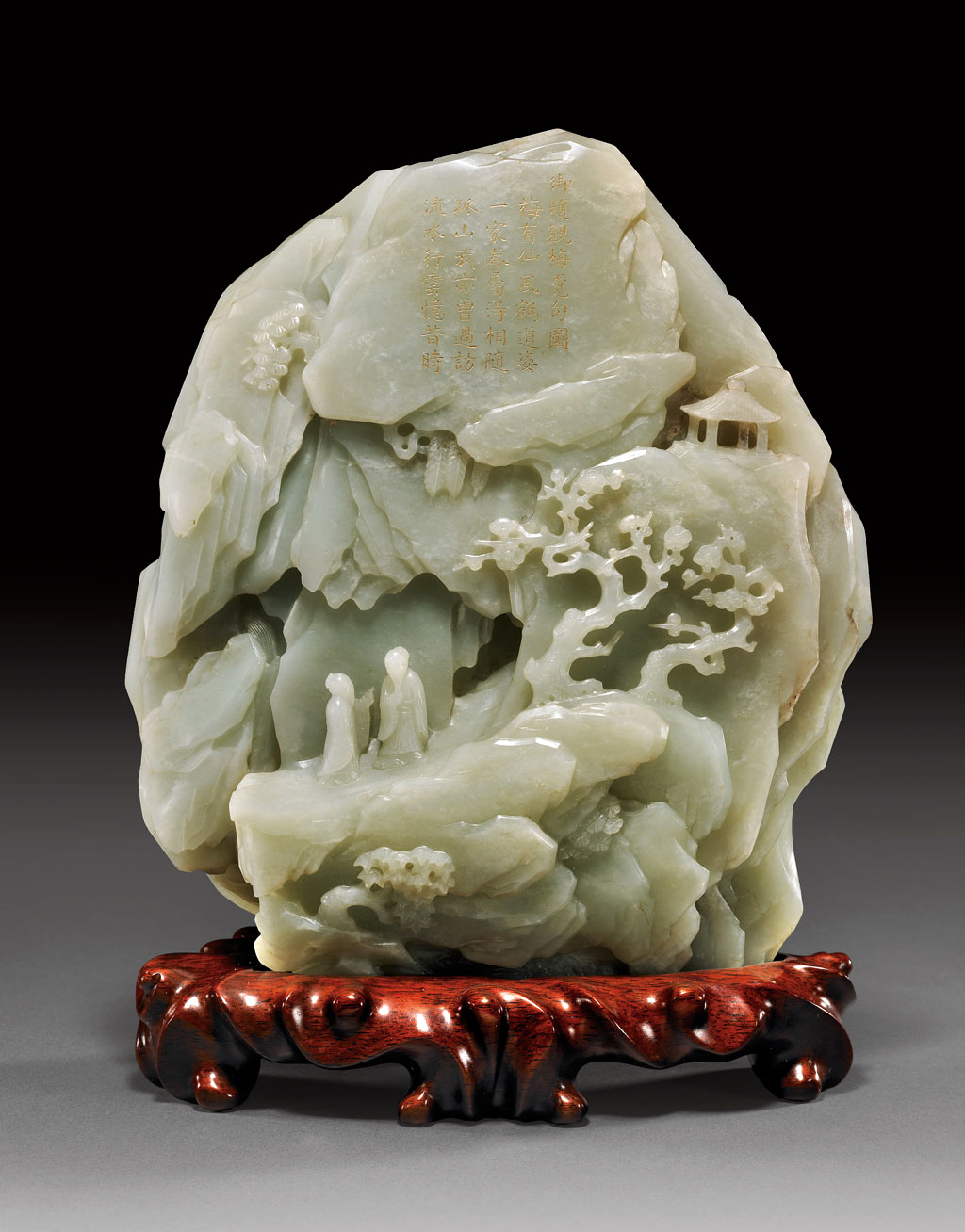 This Imperial Chinese whitish-celadon jade mountain, early 18th century, sold for $195,200 at I.M. Chait, Beverly Hills, in 2009. The scene of two sages on a pathway near plum blossom trees beneath an incised and gilt poem would have been an object of contemplation in a scholar’s study. Courtesy: I.M. Chait

Mary Ann Lum of Gianguan Auctions in New York City says, “At one time, they were cut off from the market, but the Chinese are very active now in the last ten years. The whole market changed, and the Chinese are enjoying their power as consumers of luxury goods – sometimes it distorts the market. Because of the name Ellsworth, a thousand Chinese from Beijing, Shanghai, and Guangzhou flew in on private jets, just to buy a piece from his collection. He had beautiful stuff.” She continued, “If your grandfather was a traveler or soldier or missionary and brought back jade, these people have things that might be worth half a million dollars because the Chinese are buying it.” 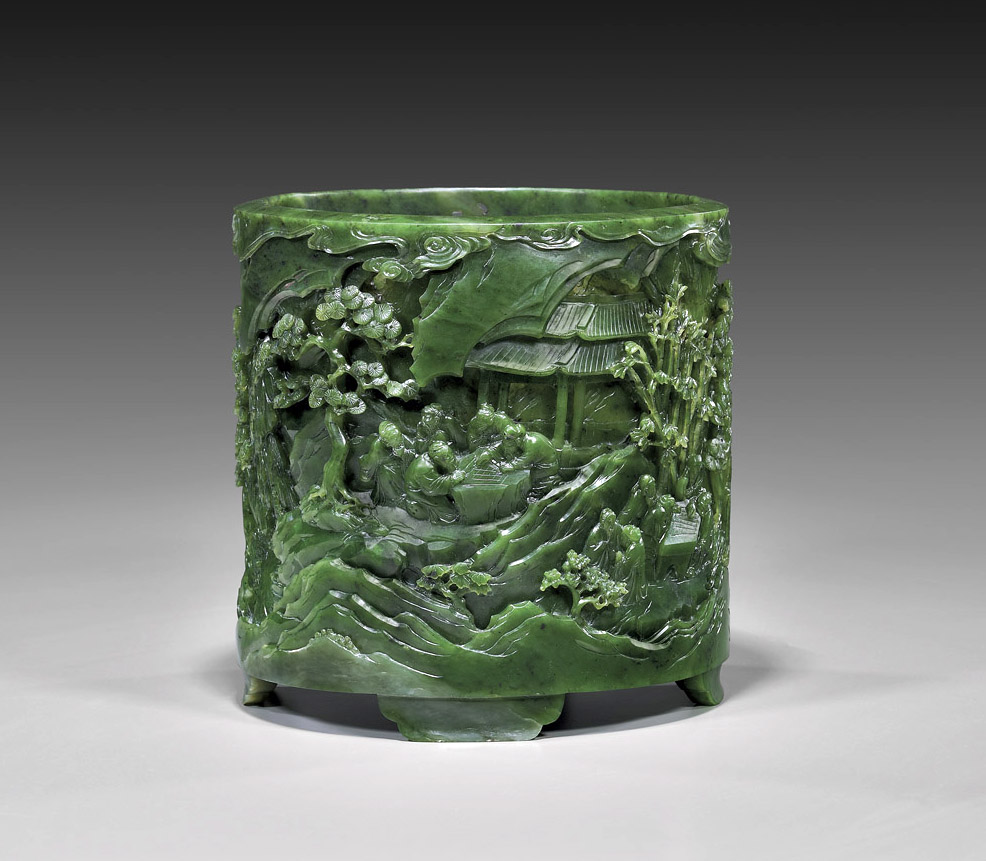 An essential accessory for a scholar’s desk, this brushpot of brilliant green spinach jade, a type of nephrite, is decorated with a mountain forest scene featuring scholars playing chess. The large cylinder, with a earlier Spink & Son Ltd. label on base, sold for $75,000 at an I.M. Chait auction in 2012.
Courtesy: I.M. Chait

In this volatile market, when collectors are asking, ‘What can I buy and what should I sell?’ it becomes increasingly important to know the facts about jade. Before consigning or bidding, study the origin, history, varieties and style of jade production. There are two important varieties of jade: nephrite, found in China and Central Asia, which was used for most of the archaeological, historic, and antique jade objects made in China; and jadeite, imported from Burma beginning in the late 18th century, which is a precious stone used principally for fine jewelry. The Chinese word for jade – yu – is vague and refers to either material as well as several other hard stones. 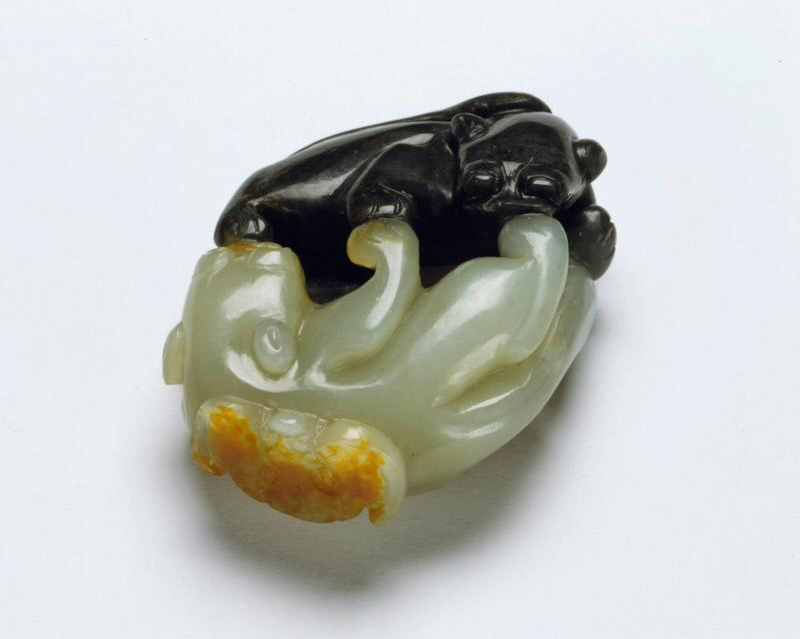 Variations in color on a piece of nephrite jade often inspired craftsmen; this unusual stone became light and dark cats playing while a rust-colored bat flutters at one end. The Qing dynasty sculpture is one example from a large collection formed by Avery Brundage (1887-1975), which became the foundation of the Asian Art Museum in San Francisco. Courtesy: Asian Art Museum

A more technical analysis is provided by the Department of Geological Sciences at the University of Texas at Austin: “Jadeite is a sodium-rich aluminous pyroxene; nephrite is a fine-grained, calcium-rich, magnesium, iron, aluminous amphibole. All jade is composed of fine-grained, highly intergrown, interlocking … crystals of one of both of these minerals. Though neither mineral is very hard (6-7), jade is one of the toughest gem minerals known because of the intergrown nature of the individual crystals.“ The challenge of working with these difficult minerals merely enhanced their value and attraction for wealthy patrons. 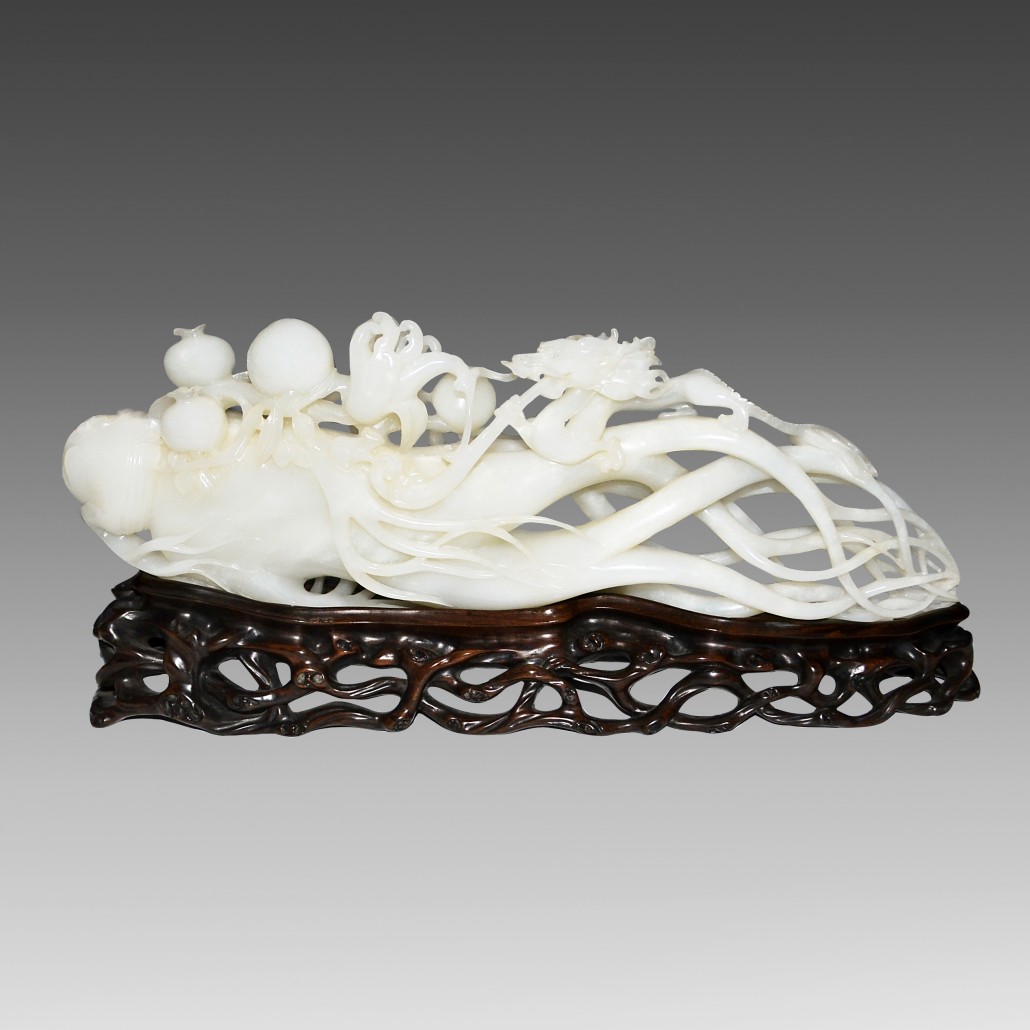 Delving deeper, the department notes, “…jadeite jade is quite rare and in its emerald-green, translucent form is referred to as Imperial Jade or ‘gem jade’. A small amount of Cr [chromium] in jadeite accounts for the color of imperial jade.” This article deals principally with antique nephrite artifacts, because the jadeite jewelry market hinges on the quality of the individual precious stones, regardless of age. In 2014, a string of exceptionally large, perfectly matched jadeite beads with a ruby and diamond Cartier clasp, once the property of American heiress Barbara Hutton, sold for $27.44 million in Hong Kong [at Sotheby’s], more than doubling its estimate. 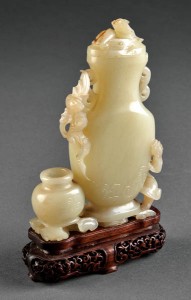 Great American museum collections of jade are a source of scholarly research illustrated with important examples. Industrialist Avery Brundage (1887-1975) was president of the International Olympic Committee for 20 years and a determined collector of jade objects. When he gave his collection to the City of San Francisco, the Asian Art Museum was created to display it. The unique properties of jade, cited in the geological analysis above, directly influence how jade objects are created.

Although market descriptions often refer to jade “carvings,” the Asian Art Museum provides the following “how it was done” information for visitors: “Jade cannot be carved. Because of its hardness, it can rarely be shaped by chiseling or chipping but must be worn away by abrasion with tools and hard sand pastes. This is a process that requires immense patience – even with modern machinery…. Because the process was so labor-intensive and time-consuming, jades reflected the ability of a ruling elite to command resources, and therefore came to symbolize power, status, and prestige.” The difficulty of working jade makes the results achieved by craftsmen even more remarkable.

Collectors interested in exploring the museum’s collection further can turn to Later Chinese Jades: Ming Dynasty to Early Twentieth Century (2007) by Terese Tse Bartholomew, Michael Knight and He Li, which contains 400 individual object entries. The volume focuses on a particular period: “Nearly a decade in the making, this will become the definitive guide to Chinese jades from the Ming dynasty through the early twentieth century. This was a particularly rich period in jade production. As this book reveals—based on the most current scholarship—many jade objects previously thought to be of ancient manufacture were actually produced in these later periods.” For example, the museum owns a very pale green nephrite vessel with handle, made in the 19th century during the Qing Dynasty, which copies a bronze jia wine vessel from the much older Shang Dynasty (1600-1046 B.C.). 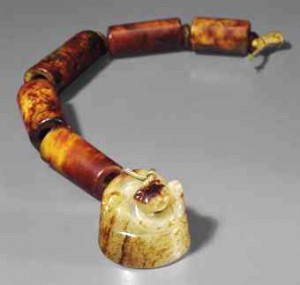 Christie’s multi-part 2015 sale of the Asian collection of noted dealer/collector/scholar Robert Hatfield Ellsworth included a separate catalogue devoted to Qing Dynasty ceramics, glass and jade carvings. Among the Top Ten was this diminutive green and russet jade seal – less than an inch in diameter – on a string of cylindrical beads, which sold for $221,000 (est. $4,000-$6,000) to a private buyer after competitive bidding. Courtesy: Christie’s New York.

Although “jade green” is a common description, both minerals come in a range of colors, which occur because of the presence of trace elements. Nephrite can be pure white, soft yellow, pale to bright green, deep spinach green, violet, or brown with varied mottling and mixtures. Coloration often suggested subject matter to craftsmen; the light and dark cats illustrated emerged from a particularly interesting piece of stone. Bright green, transparent or translucent jadeite has always been in demand for jewelry, but the mineral also comes in other colors including white, violet, and orange. Unfortunately, jade colors can be enhanced with dyes. Auction houses will often require that jade consignments be submitted to GIA – Gemological Institute of America – for testing to rule out tampering. Just as later Chinese artists copied earlier jade styles, clever artisans today make reproductions of popular styles and periods, so it makes sense to buy only from reputable specialists.

Another excellent source of information on the jade market comes from auction house experts such as Jake Chait of I.M. Chait in Beverly Hills, California: “I’ve been doing this most of my life – watching auctions since I was a little kid. I remember stories my dad told me of early sales of jade. In the 21st century, we’ll see some of the same pieces come up at Christie’s or Sotheby’s and sell for half a million dollars. I’m only 32, but during my lifetime, I’ve watched the evolution of prices. Ultimately, it’s going to be the great-color, beautifully carved older pieces that are going to bring the big money. The genuine Qianlong Emperor period (1711-1799) pieces and any kind of jade that is Imperial quality. You also have some archaic jade that is bringing strong prices nowadays.”

Chait suggested that collectors might want to focus on a certain time period, a certain source location or a certain kind of jade: “I like scholars’ objects, personally. I like the detail and the intricacy and I like the whole idea behind them, each thing has its specific purpose. When I design my auction estimates, I try to price things where I feel they will be attractive to buyers and encourage competition at an auction. If the estimates are too high, you price everybody out. If it’s too low, they will think there’s something wrong with the lot. You want to find that correct place. You never know who’s going to be bidding, you never know who is going to show up in person or online. Bidding at auction is exciting, you get caught up in the moment – there’s a reason it’s called ‘auction fever.’ It’s hard to restrain yourself from making one more bid, one more raise of the hand.”