The 1918 wartime tune How ’Ya Gonna Keep ’Em Down on the Farm (After They’ve Seen Paree) was all about U.S. doughboys returning home from Europe, but it might well have applied to Spanish artist Joan Miro – minus the gaiety. 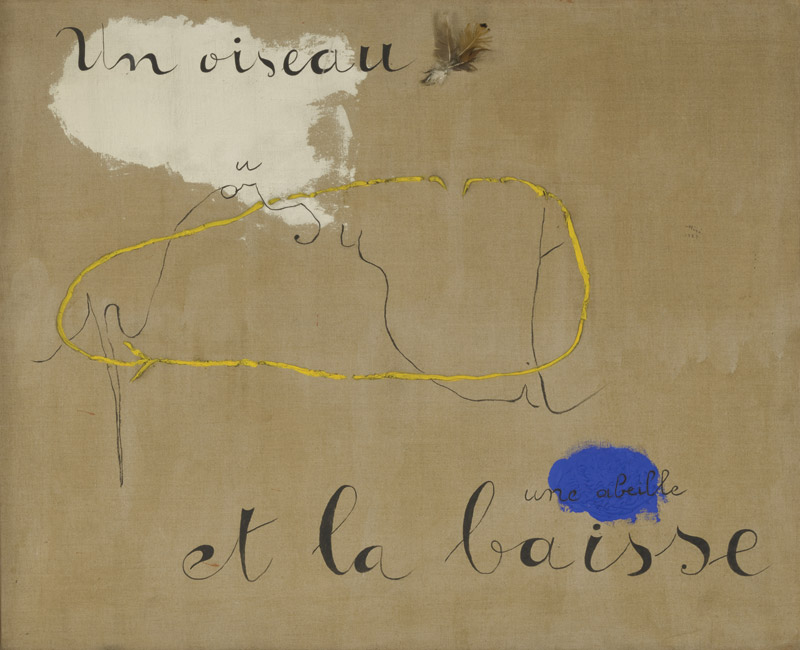 Born on April 20,1893 in Barcelona, the capital of Catalonia, Spain, Joan Miró studied art at a local academy. His ties to his native land and to the family farm at Montroig, a rural coastal village, became a source of inspiration.

In 1918, Miró and a few young artists founded Agrupació Courbet, a group opposed to the conservative traditions in Catalan art. His large painting titled Standing Nude, done in 1918 in Barcelona, showed strong influences of Fauvism and Cubism. In the summer of 1918, however, Miró began painting only landscapes in and around Montroig.

The Vegetable Garden with Donkey and The Wagon Tracks, both 1918 works, show the painstaking exactness of his so-called detailistic phase. The Farm, 58 3/4 inches by 52 3/4 inches, done in 1921-22, in which Miró chronicled minute details, has been described as the highest achievement in his poetic realism. 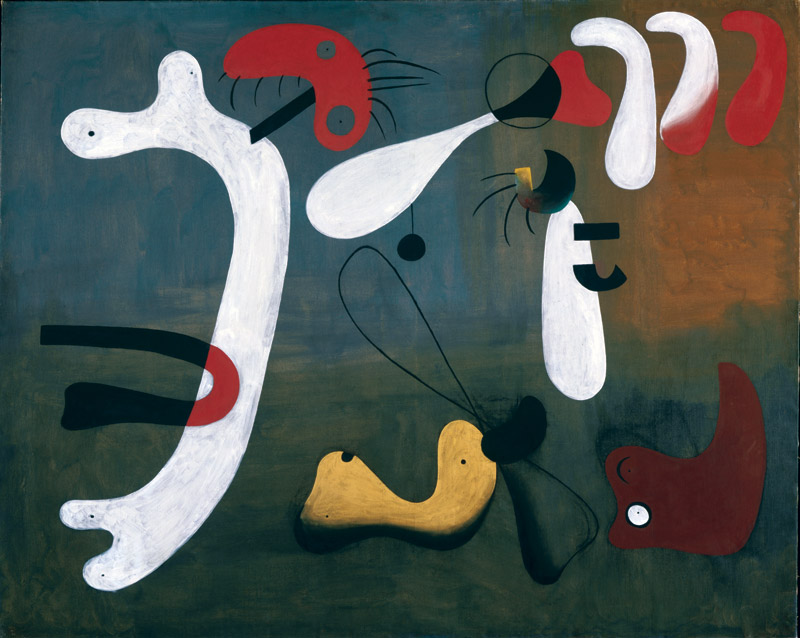 In early 1920, Joan Miró visited Paris for the first time. From that point on he ordinarily spent the first half of every year in Paris and the rest of the year in Montroig and Barcelona. In Paris, Miró met André Breton and other participants of the Surrealist group in 1924. Miró exhibited in the first showing of Surrealist art in 1926, although he did not become a member of the group.

As the decade progressed, Miró’s pictures became increasingly abstract, and his forms more organic. These paintings are constructed freely with schematic lines and opaque shapes on plain grounds. In these works Miró moved, as he later said, “beyond painting.”

Described as a deliberate artist who spent much time on his works, Joan Miró was highly productive. He began making it a practice to plan blocks of work into series of alternating styles. 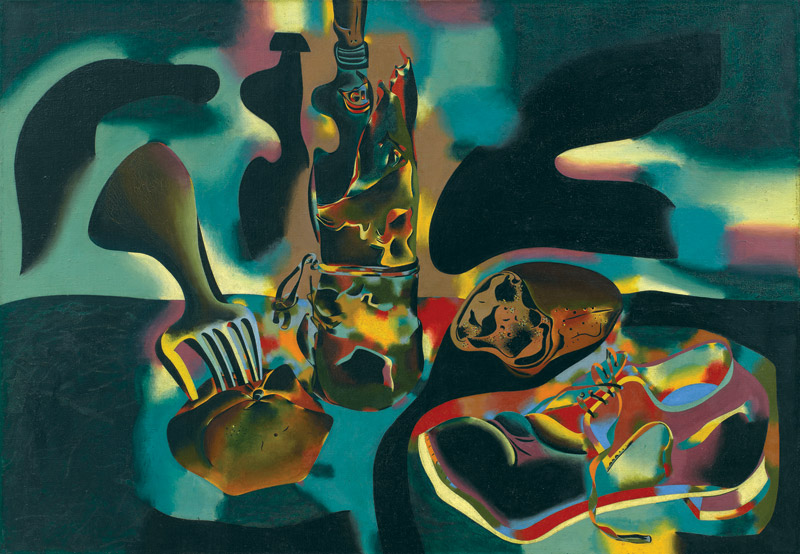 The Museum of Modern Art in New York examined this practice in an exhibition titled Joan Miró: Painting and Anti-Painting, 1927-1937. Unlike numerous Miró retrospectives, this exhibition examined his practices and strategies during a transformational period in which he attacked the conventions of painting.

Beginning with the notorious claim Miró made in 1927 that he wanted to “assassinate painting,” the exhibition explored 12 of artist’s series over the next 10 years.

The exhibition was an in-depth look at a decade’s worth of Joan Miró’s work, “created during a period of economic and political turmoil, illuminating the way his drive to assassinate painting led him to reinvigorate, reinvent and radicalize his art. The resulting body of work is at times willfully ugly and at others savagely beautiful,” said Anne Umland, curator of the Department of Painting and Sculpture at MoMA. 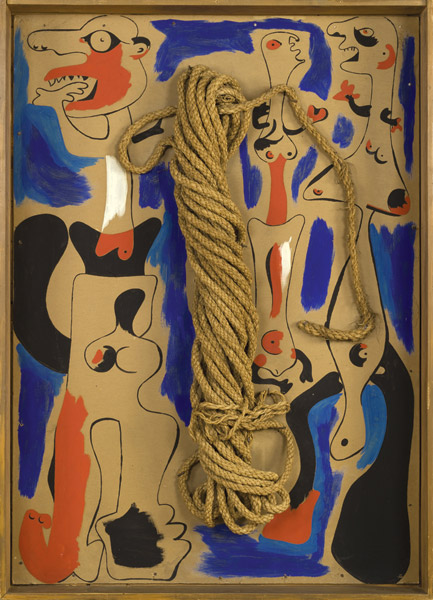 The Rope and People I, 41 1/4 inches by 29 3/8 inches, is one of a series from 1935-36 that Miró described as a critical self-review. The work is oil on cardboard with a coil of rope mounted on wood. The Museum of Modern Art, New York, Department of Imaging Services. Copyright 2008 Successio Miró / Artists Rights Society (ARS), New York / ADAGP, Paris.

Opening with seven raw paintings on unprimed canvas from 1927, the exhibition moved to Miró’s collage-objects of 1928 collectively known as “the Spanish Dancers.” His Portrait of a Dancer is composed only of a feather, a small cork and a hatpin mounted on a large field of white.

The next series from 1928-1929 is called Dutch Interiors and Imaginary Portraits. One of the works is based on a postcard reproduction of a 17th-century of a lute player – gone electric. In it, Miró rejects the ambition of past artists to deceive viewers into believing that the painted images they see are real. The series of large pictures represented the last paintings Miró would create for about two years, as he moved on to making assembled objects.

“Often Miró’s art is seen to stand for all that is spontaneous, lyrical or poetic, improvisational within surrealism,” said Umland. “I think that when you go back and look at the process you realize that with all great artists the complexities involved and sort of the rigor and calculations that went into creating things that looked anything but preplanned is something that adds to our complicating the idea of who Miró was and what his ambitions were.” 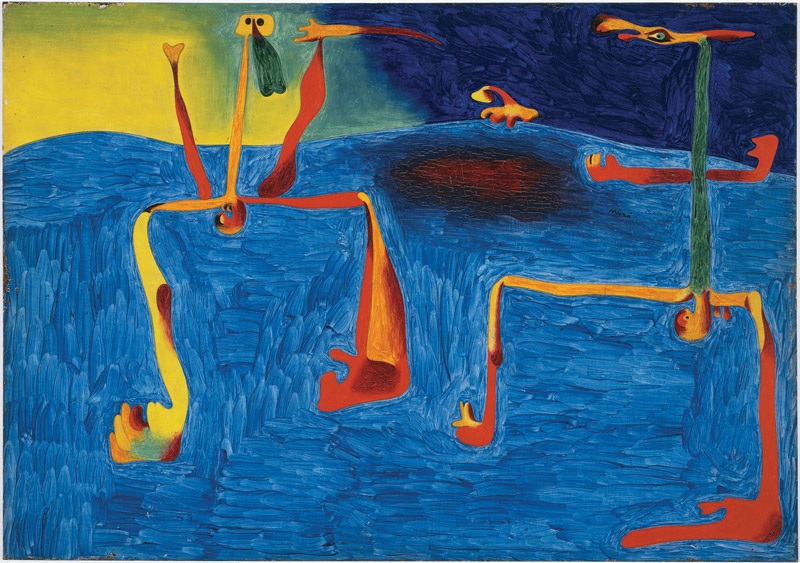 Miró chose an old technique of painting on copper to create The Two Philosophers, which was a test of his technical virtuosity. It is one of a series of 12 small-format paintings on either Masonite or copper. The Art Institute of Chicago. Copyright 2008 Successio Miro / Artists Rights Society (ARS), New York / ADAGP, Paris.

Miró planned and created these series as the U.S. stock market crash of 1929 spread to an economic crisis across Europe. Miró had enjoyed a measure of success avant-garde circles in Paris, but when his dealer dropped him, he was forced to return to Barcelona. “He had to use the room he was born in – as he remarked with some irony – as his studio,” said Umland, noting Miró’s tenuous economic stability during this period.

“Miró’s pictures became increasingly abstract, and his forms more organic. In these works Miró moved, as he later said, ‘beyond painting.’”

It might occur to some that Miró put together these wildly varying series to see what might stick in the art market, but Umland dismissed the notion.

“I think he was trying to undo himself and his talent constantly during these years. Sort of like, if I can do one thing well, I’m going to try to do the opposite in the next series,” said Umland. “There wasn’t a predictable, marketable, commodifying Miró style.” Unlike his contemporary and countryman Pablo Picasso, Miró was married to one woman his entire life, Pilar Juncosa. “There wasn’t constant change in that circumstance,” said Umland. “I do think with Miró there was always the sense that he needed routine and a firm foundation, as he would say, to leap higher for his art to go further.” 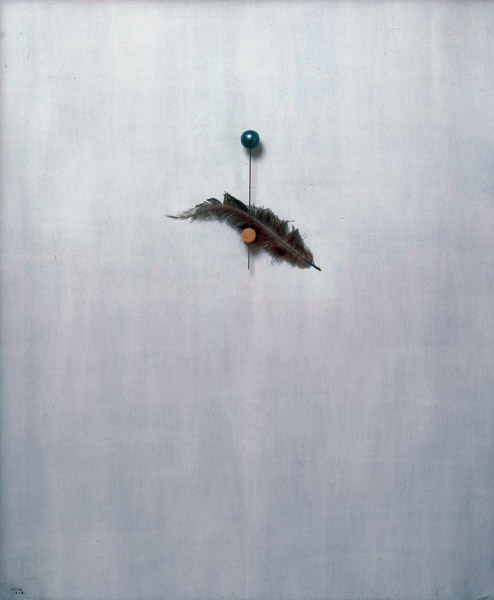 With civil war breaking out in Spain in July 1936, Miró left Barcelona for Paris before the end of October. His wife and their daughter, Dolores, joined him in December. They would not return to Spain for four years.

In January 1927, Miró announced his departure from planning a series and thrust himself into work on a painting titled Still Life with Old Shoe. Described as an incandescent, hallucinatory painting, Miró’s masterpiece is often compared to Picasso’s Guernica, a painting protesting the bombing of that Basque town. While Miró’s painting is not based on history, the haunting landscape resonates with the impending doom associated with World War II.

Hoping to avoid the threat of war, Miró moved to the village of Varengeville on the coast of Normandy. When the Nazis bombed Normandy in May 1940, Miró and his family fled to Barcelona and Montroig. He took with him the first 10 gouaches collectively known as “the Constellations,” which represents the height his creativity. He completed the series of 23 paintings in Spain.

Miró’s Constellations were among the first works of art coming out of Europe at the close of the war and influenced a generation of American painters known as Abstract Expressionists. 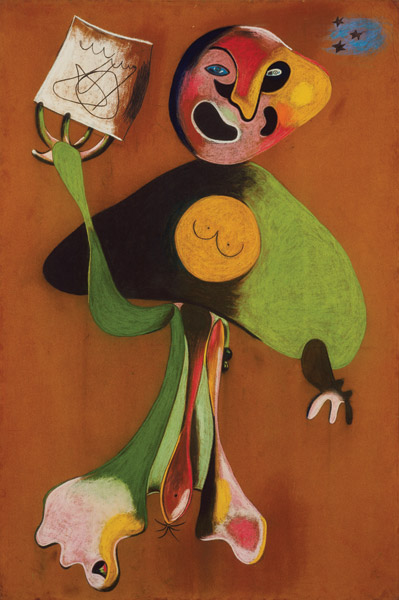 After the war Miró directed his creative talents toward sculpture, ceramics and printmaking. He became involved with many public commissions and projects, including large murals and sculptures.

Having moved to Palma de Mallorca in Spain in 1956, Miró christened his new studio in 1961 by painting three large paintings: Blue I, Blue II and Blue III. The group represents a compression of Miró’s serial approach to making art.

Late in life Miró worked on a series of paintings that were freer and done with less planning than anything he had ever done before. Miró died at age 90 on Dec. 25, 1983.

Celebrating the centenary of the artist’s birth, the Museum of Modern Art mounted a retrospective that attempted to reveal Miró’s full range as an artist. The scope of MoMA’s recent Miró exhibition focused on only 10 years of his formative career, but Umland believes it was no less forceful.

“What it did reveal was the radical range of Miró’s experimentation … such variety in themes, of materials used, types of iconography (and) the relation of the politics to economic times,” said Umland. “Looking at Miró’s work with hallucinatory color, and then with the most stripped-down sort of bare abstract language imaginable; of works of great refined delicacy in contrast to those that were far more brute, I think that it’s that sore of constant pushing and undoing of his own talent, reinventing and risk-taking that was made evident in a way that hasn’t been done previously.”