In 2005, the Leibers opened their own museum in Springs, New York, at the tip of Long Island. The galleries display both Gerson’s artworks and Judith’s accessory designs, such as this 2004 peacock minaudiere. Courtesy the Leiber Collection; photo credit Gary Mamay.

Chronicling the career of Hungarian-American accessory creator Judith Leiber (b. 1921-), the Thames and Hudson Dictionary of Fashion and Fashion Designers concluded, “But it is her whimsical rhinestone-studded evening bags, often crafted in the form of minaudieres, which have brought her lasting fame.

Brightly colored, small-scale and delicate yet sturdily engineered, they are covered with handset Austrian crystal and semiprecious stones, duplicating flora and fauna.”

Movie stars flash them on the red carpet, president’s wives carry them to the inauguration ball, and collectors snap them up at vintage couture and jewelry auctions across the country. While the head might argue that you can get by with just one, the heart knows that you can never have too many of these glittering minibags in a hundred clever forms; one leads to another and a collection grows. The whimsical designs of the minaudieres are far too charming to keep in a drawer.

The form seems to have been developed by jewelers; Charles Arpels made one for socialite Florence Gould in the 1930s. The lip-smacking name “minaudiere” comes from a French term for silly little trifle, and the small size of the Leiber examples – dimensions under 6 inches – means only a few necessary items can be carried within. The artist designed elegant leather handbags for daywear, but the evening bags completely covered with handset crystals and semiprecious stones attract the most attention.

Ireys Bowman, veteran specialist at the New Orleans Auction Galleries, remembers the November 1999 auction of Leiber bags from a collection assembled by Louisiana philanthropist Bernice Norman, which was sold to benefit the New Orleans Museum of Art. Norman loved the designs and was rumored to have around 300 examples.

“It’s very apparent that these are not things that are machine-produced and just replicated exactly, time after time…”

In an interview with Auction Central News, Bowman said, “Judith Leiber was here for the sale and purchased some of the purses back to put in her personal museum. So it was a big event – a special sale one night. We continue to sell them steadily – the day handbags bring under $1,000 generally, but the minaudieres, of course, bring the most, and if they’re featured in the Judith Leiber book, they bring even more.” The book referred to is Judith Leiber: The Artful Handbag (1995) by Edith Nemy, John Bigelow Taylor photographer.

Bowman continued, “The minaudieres sell in the $1,000-$2,000 range, unless it’s something very special – and that makes a big difference. Everybody on earth is selling them now, but I think we were one of the first major auction companies to get on the vintage fashion accessory bandwagon.”

Judith Leiber’s interest in Asian art is reflected in this crystal-studded Buddha design, which sold earlier this year at a Bruce Kodner auction for $1,573. It is 5 1/2 inches high. 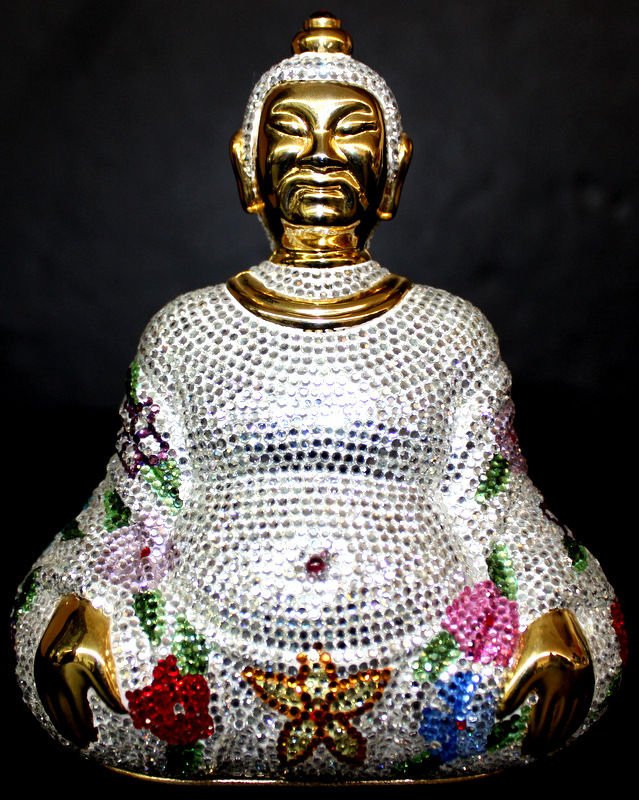 Judith Leiber, nee Peto, was born in Budapest in 1921. Her hopes of studying chemistry in London were thwarted when war broke out in 1939. She joined the Hungarian handbag guild and worked her way up to master status, learning every aspect of construction. Her family survived the war, and at its conclusion she met and married American G.I. Gerson Leiber. After moving back to New York, she exercised her expertise at several accessories firms before founding her own in 1963.

Her designs received a number of prestigious awards. Fashionable stores carried the bags, and the New York Times did a lengthy story on Leiber in May 1996 after she opened her own boutique on Madison Avenue. Christine Cavanaugh, the actress providing a voice for the central character in the movie Babe, had carried a jeweled pink pig minaudiere on the Oscar red carpet that year. Judith Leiber is now retired from active designing, but the firm bearing her name continues to produce both old and new shapes, which are carried in stores such as Saks Fifth Avenue, Neiman Marcus and Bergdorf Goodman. 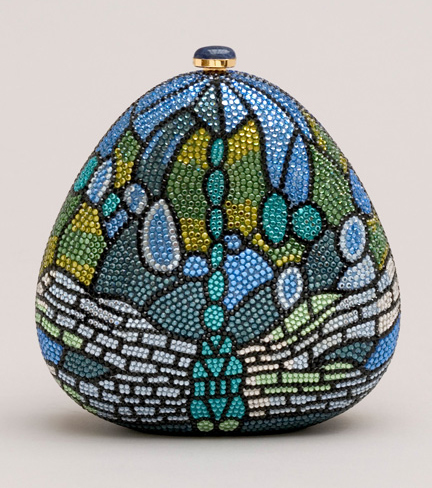 Judith Leiber evening bags were always luxury items intended for wealthy partygoers who want their outfit to be noticed; new creations with the brand name easily bring $5,000 or more. So vintage examples can be viewed as an opportunity to acquire something marvelous at a reasonable price.

Minaudieres are equipped with a concealed shoulder chain, which can be used to carry the evening bag. This rare mask design brought $1,694 in May at the Bruce Kodner Galleries in Lake Worth, Florida. 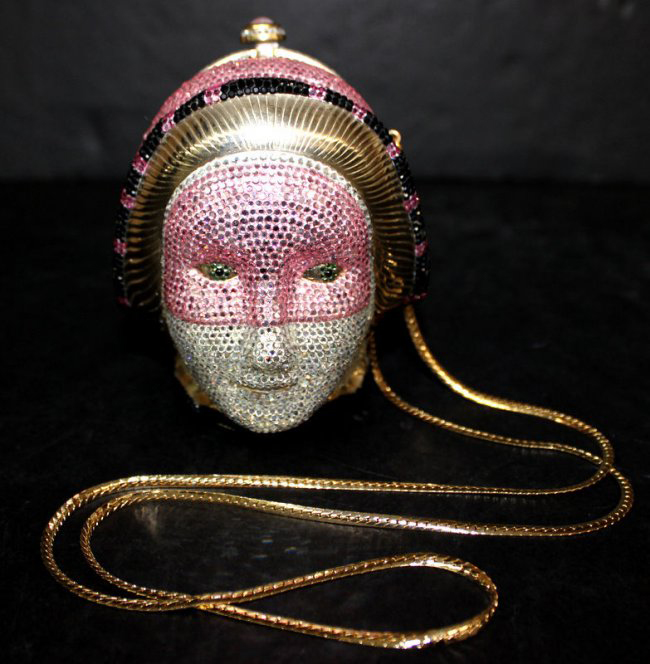 Most Judith Leiber evening bags have been well-cared for and retain their original accessories – a coin purse, standing mirror, tasseled comb, and soft storage bag. 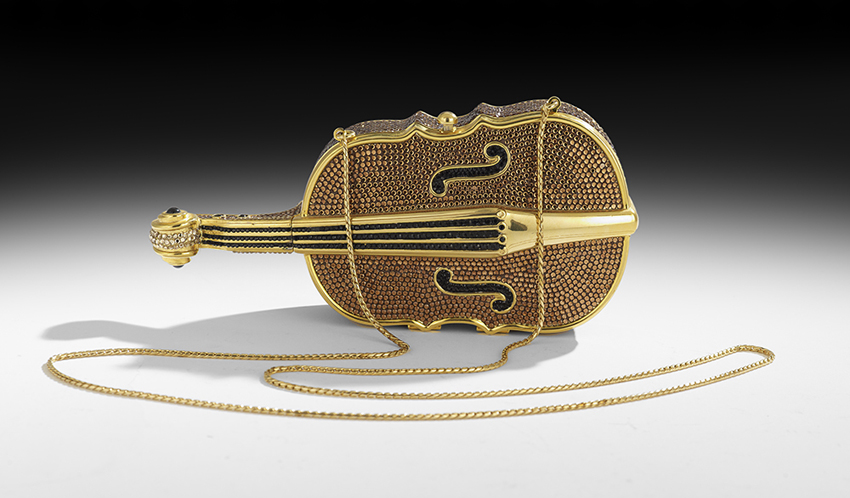 Some Judith Leiber evening bags still have the store’s price tag and the designer’s certificate of authenticity. Restoration services are available if stones are missing from their settings.

The Museum at FIT, the Fashion Institute of Technology in New York City, has around 45 Judith Leiber bags in their permanent collection, including this bright 1994 tomato minaudiere design. 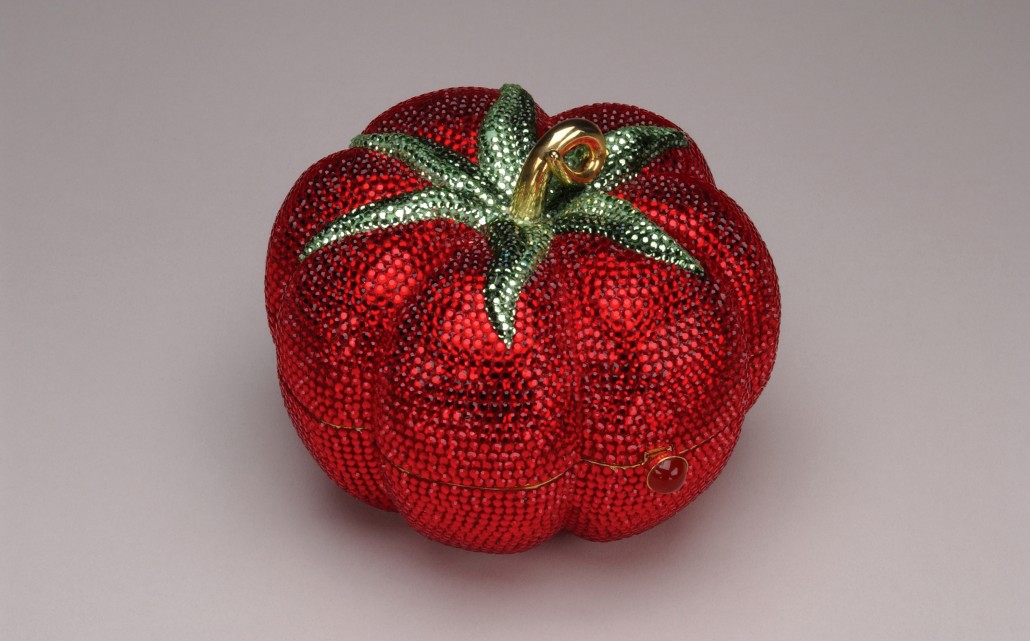 There, students can examine how the bags are constructed. Colleen Hill, associate curator of accessories, said in a recent interview, “There are a lot of whimsical handbag styles throughout the 20th century. Although Leiber did do many different styles of bags, these jeweled minaudieres were what she was especially well-known for – they’re conversation pieces. The craftsmanship is absolutely the thing that I like to point out. Everything is really perfect, everything lines up exactly.

“For true luxury items like these Judith Leiber bags, you have to look closely at them – you have no visible glue, everything is fitting together perfectly, they’re almost objects of art in their own way. You can imagine how they’ve become collectors’ items – they’re more than just something to carry to a fancy party, they’re really something that can be admired as an object as well as an accessory. It’s very apparent that these are not things that are machine-produced and just replicated exactly time after time, which adds to their one-of-a-kind appeal.” 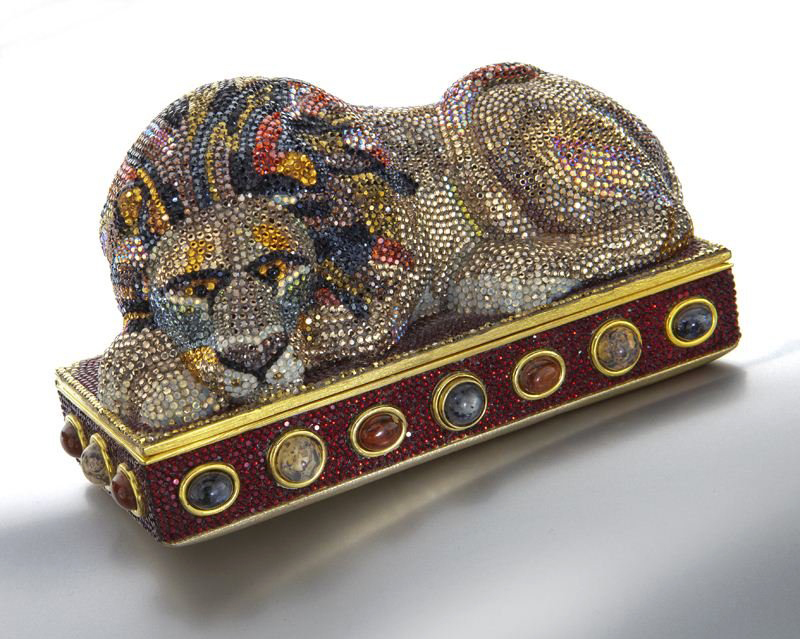 The Metropolitan Museum of Art has well over 100 Judith Leiber purses, evening bags and minaudieres in their fashion archives, and her works are represented in the permanent collections of many other museums here and abroad. Fortunate collectors were able to view more than 170 examples in a touring exhibition, “Fashioning Art: Handbags by Judith Leiber,” organized by Washington’s Corcoran Gallery of Art in 2003.

The form of Japanese inro, a container for small objects hung from a sash, inspired this tripartite beaded minaudiere with red silk cord and a gold leather lining. The colorful purse sold for $4,613 at DuMouchelles in Detroit in 2013. 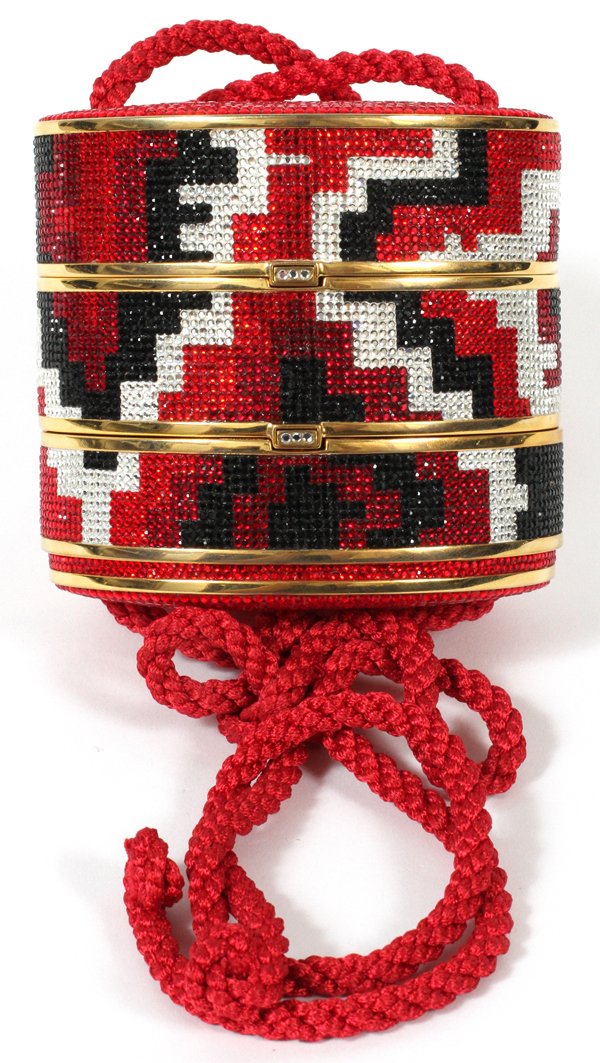 In 2005, Leiber and her husband Gerson, who is a Modernist artist, opened their own museum in the East Hampton village of Springs, New York, near the tip of Long Island. (www.leibermuseum.org). Surrounded by a sculpture garden, the museum will be open during the summer beginning Saturday, May 23. Works by both artists – including many handbag designs – are on view in the galleries and a history of their entwined careers can be found in No Mere Bagatelles: Telling the Story of Handbag Genius Judith Leiber & Modernist Artist Gerson Leiber by Jeffrey Sussman (2009).