Inspired by a photo of the Italian soprano Lina Cavalieri (1875-1944), Fornasetti created hundreds of porcelain plates –
a series he called ‘Tema e Variazioni’ – decorated with surrealistic and trompe l’oeil variations on her beautiful face.
The plates turn up frequently at sales and remain an affordable approach to the designer. Courtesy Uniques.

Only a collage of images can truly capture the genius of Italian designer Piero Fornasetti (1913-1988) – pictures succeed where words fail.

A quick search online produces a fountain of decorated forms. At first glance, casual viewers may think they know what Fornasetti was all about. His work seems recognizable and identifiable, particularly his beautiful face-morphing “Tema e Variazioni” plates or furniture decorated with architectural prints. But, like a classic jester, he pops up at a different artistic point with a new trick – there is always a clever form or an inspired pattern yet to discover.

Fornasetti was born just before World War I in Milan, a northern Italian town near the Swiss border that produced many gifted designers destined for international recognition. After briefly studying painting in his native city, he used a grant to travel to Africa. The artist absorbed and transformed many influences – classic to modern historical styles, mind-bending surrealism, the lure of exotic scenery, and a 20th century fondness for vivid colors. When he began to paint, he created scenes not on canvas but on silk scarves, which he exhibited at the Milan Triennale in 1933. 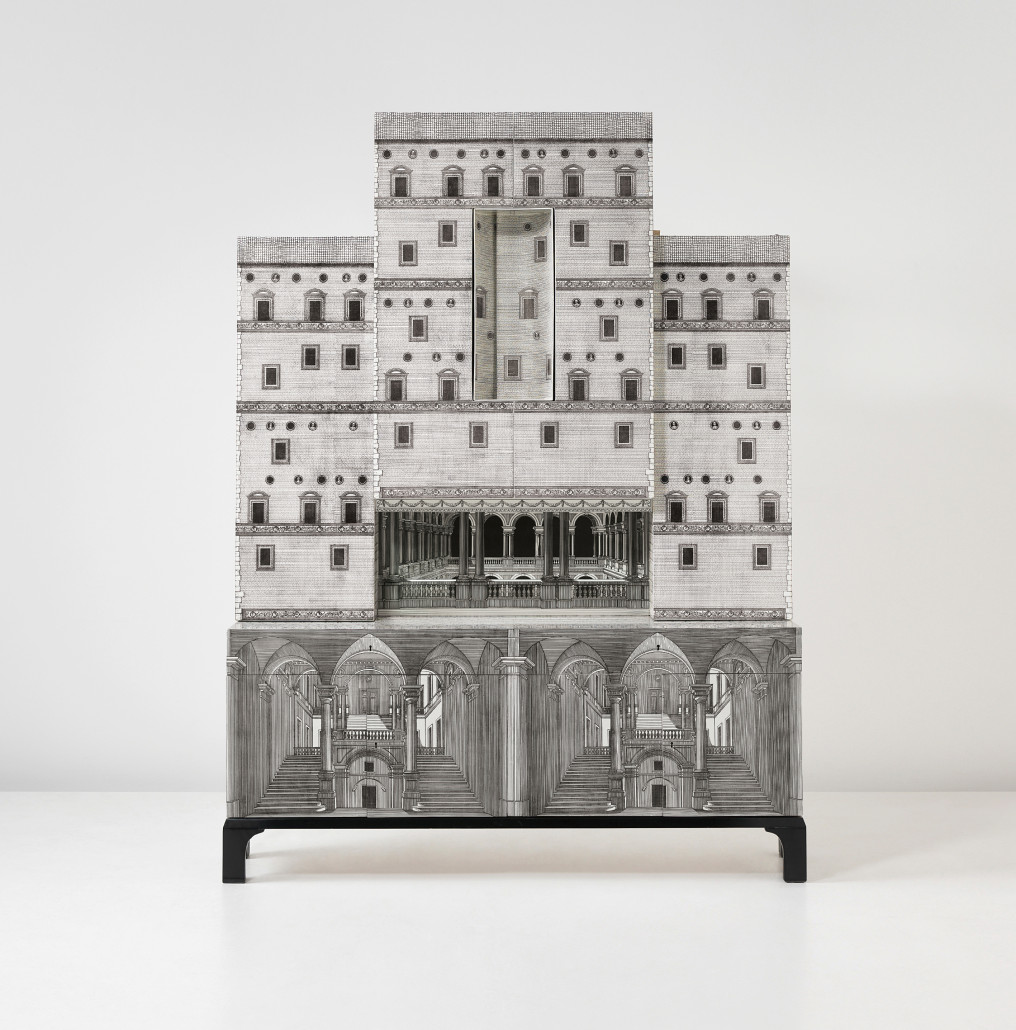 Fornasetti designed a brilliant construction for the bedroom in this trompe l’oeil ‘Architettura’ double trumeau. The case piece with transfer-printed decoration was commissioned from the firm’s Milan store in 1966. Courtesy Phillips.

While fashion accessories might not seem a quick path to fame, his imaginative take on scarves attracted the interest of Gio Ponti (1891-1979), more than 20 years his senior, who was the leading figure in the Italian design world at the time. Ponti showcased some of the younger artist’s work in his influential magazine Domus and the two began to collaborate on diverse projects. In 1950, the duo decorated the venerable Casino in San Remo on the Ligurian Riviera; they still have a “Food Corner Gio Ponti” there.

They also teamed up on interior design for the celebrated Italian luxury liner S.S. Andrea Doria launched in June 1951 from the Genoa shipyards. The liner famously sank off the coast of Massachusetts after a collision in July 1956, but vintage photographs record their successful public room and cabin designs, irretrievably lost to collectors. More accessible, the two designers created the “Architettura” furniture line which featured Ponti-conceived forms with surface decoration in characteristic Fornasetti style, examples of which they exhibited at the Triennale in 1951. 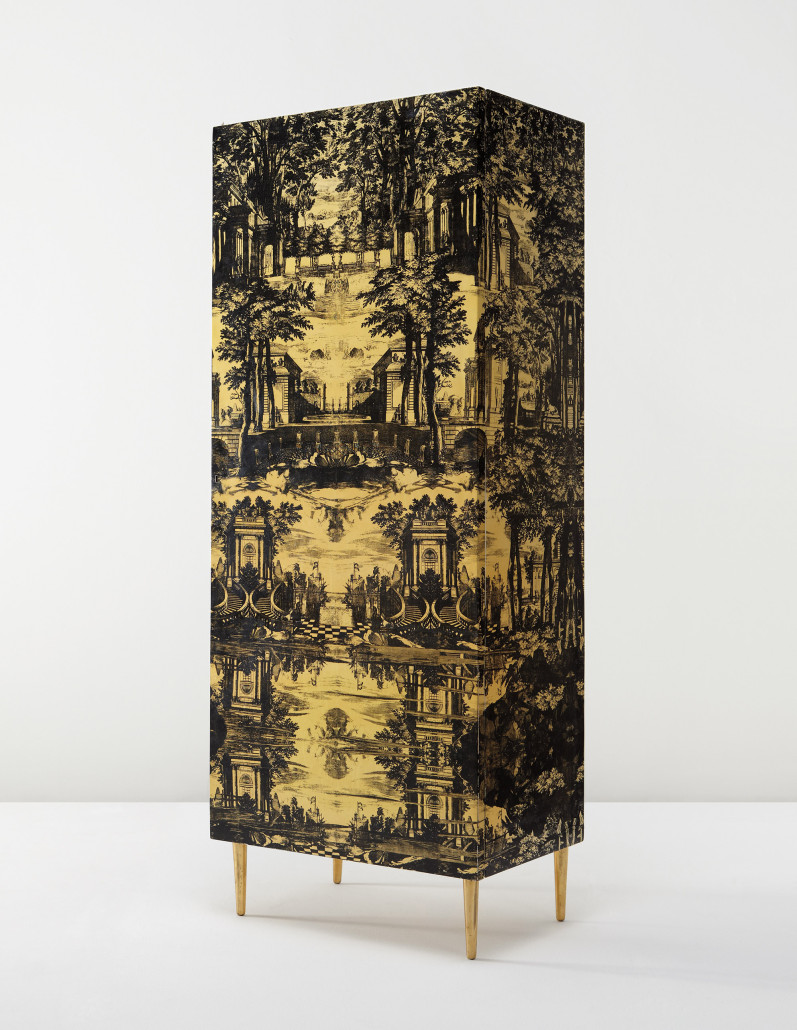 Fornasetti furnished Villa Varenna, his family’s vacation home on Lake Como, with a mixture of antiques and his own fanciful designs. This lithographic transfer-printed wood wardrobe with an 18th century garden pattern overall was a unique creation, made for his personal bedroom circa 1954. It sold at Phillips New York for $179,000 in 2013. Courtesy Phillips.

Domenico Raimondo, Senior International Specialist in Design for Phillips, London and New York, has handled important pieces by both Fornasetti and Ponti and noted the influence the older master had on the younger partner: “Ponti was incredibly generous, he helped everybody, and he had a keen eye for anything that was new and unusual. Where other designers closed themselves off into the elitist world of private commissions for the very wealthy, Ponti – as a genius – understood that industry was the future. In addition to amazing commissions, he made prototypes for mass-produced pieces so that ordinary people had something beautiful to live with.”

Fornasetti chose to follow this path as well, creating many designs that could be replicated and owned by everyone, while still at times creating unique objects.

“Fornasetti’s fanciful pieces were always witty and imaginative. In his motifs, he favored Piranesi-like engravings, the sun, moon and stars…”

Because Fornasetti was such a prolific and diverse designer, collectors must navigate a minefield of past and present production. And – with the help of experts – must learn to distinguish between the genuine article and lookalikes and to separate plentiful from rare examples. Raimondo said, “It depends how you want to shape up your collection. If you look at the forms and the variety of decoration in the mass-produced pieces, that’s one way; if you want to have unique pieces, that is another. There are some early pieces and rare pieces available.” 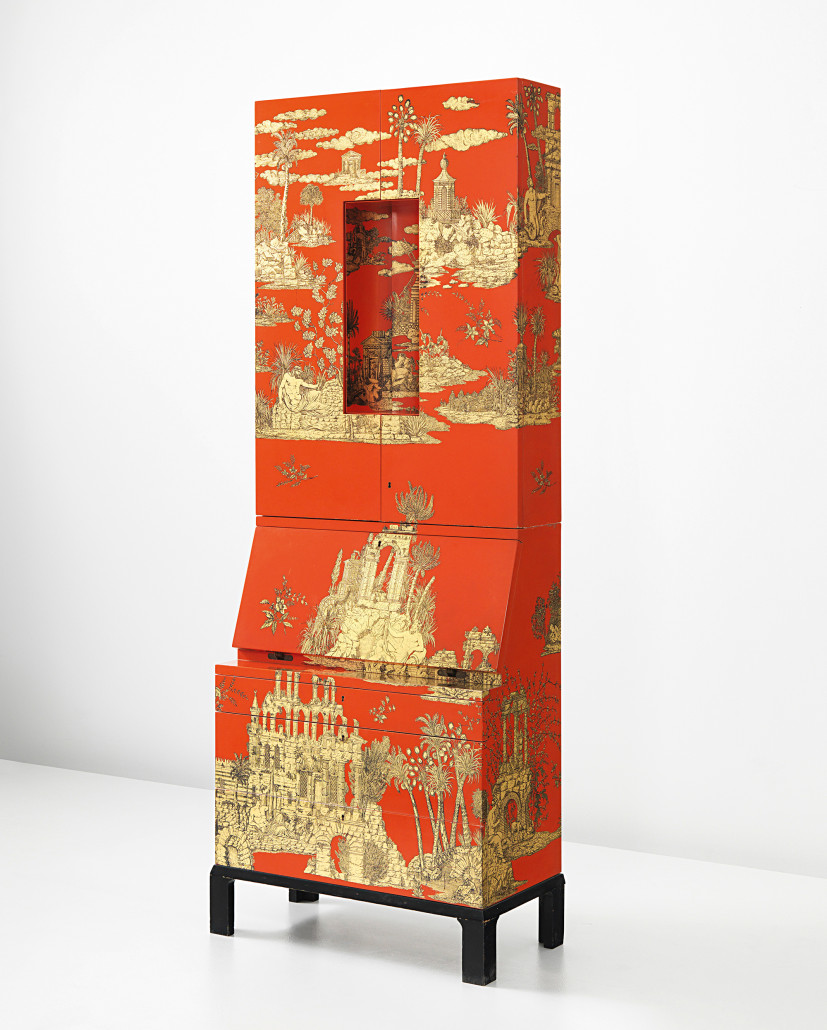 This illuminated trumeau with writing surface and drawers below is covered with an exotic ‘Gran Coromandel’ scene in gold on a red ground. One of a production of five, the work is marked with the artist’s logo and Fornasetti/Milano inside the top drawer. Courtesy Phillips.

When the designer died in 1988, Suzanne Slesin offered this tribute in the New York Times: “Mr. Fornasetti’s fanciful pieces were always witty and imaginative. In his motifs, he favored Piranesi-like engravings, the sun, moon and stars, playing cards, animals and surrealistic images.” And she offered this market note: “But recently, there has been a renewed interest in his work and his trompe l’oeil motifs have inspired new fabrics and home furnishing accessories…Collectors are seeking out the vintage Fornasetti pieces in avant-garde modern furniture boutiques and at auction.” 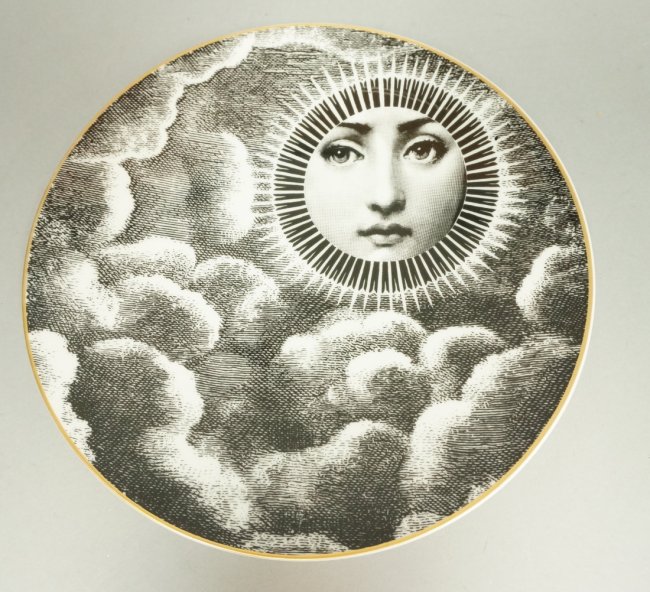 Inspired by a photo of the Italian soprano Lina Cavalieri (1875-1944), Fornasetti created hundreds of porcelain plates – a series he called ‘Tema e Variazioni’ – decorated with surrealistic and trompe l’oeil variations on her beautiful face. The plates turn up frequently at sales and remain an affordable approach to the designer. Courtesy Uniques.

Interest continued to grow over the next 25 years, and his major pieces can bring six figures at sale in the United States and Europe. “Fornasetti style” pieces made during the designer’s lifetime and in the years since his death range from faithful replicas of important furnishings to reissues of porcelain plate designs to Fornasetti-like architectural prints applied to all sorts of objects large and small. This raises the value of authenticated pieces made during his lifetime, especially unique examples and one-off commissions. 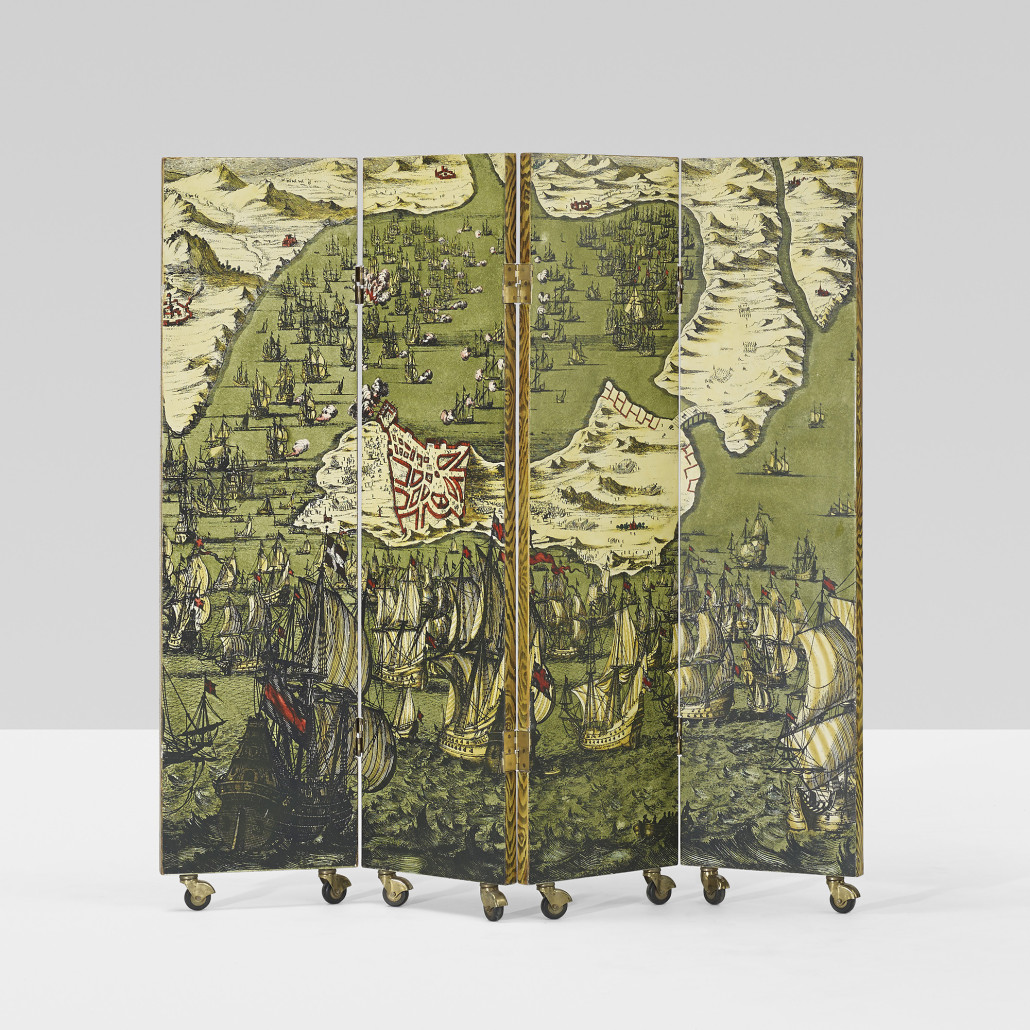 Folding screens presented a perfect surface for Fornasetti’s inspired imagery; patterns range from the historical to the metaphysical. From an edition of 10, this 1954 design depicting ‘Battaglia Navale’ – a naval battle – was sold for $20,000 by Wright in 2014. Courtesy Wright Auctions.

Domenico Raimondo cited one such piece, an “Architettura” double trumeau covered with transfer-printed decoration, which was commissioned from Fornasetti’s Milan store in 1966; it brought $104,500 at Phillips New York in 2014: “An amazing piece, and a great example of something that a serious collector should go for, because the design is unique and wasn’t repeated again. It’s incredibly architectural – not just because of the decoration but because of the actual form. With Fornasetti, the decoration takes over and becomes something else – there’s a metaphysical aspect to it. I think he was an absolute genius.” 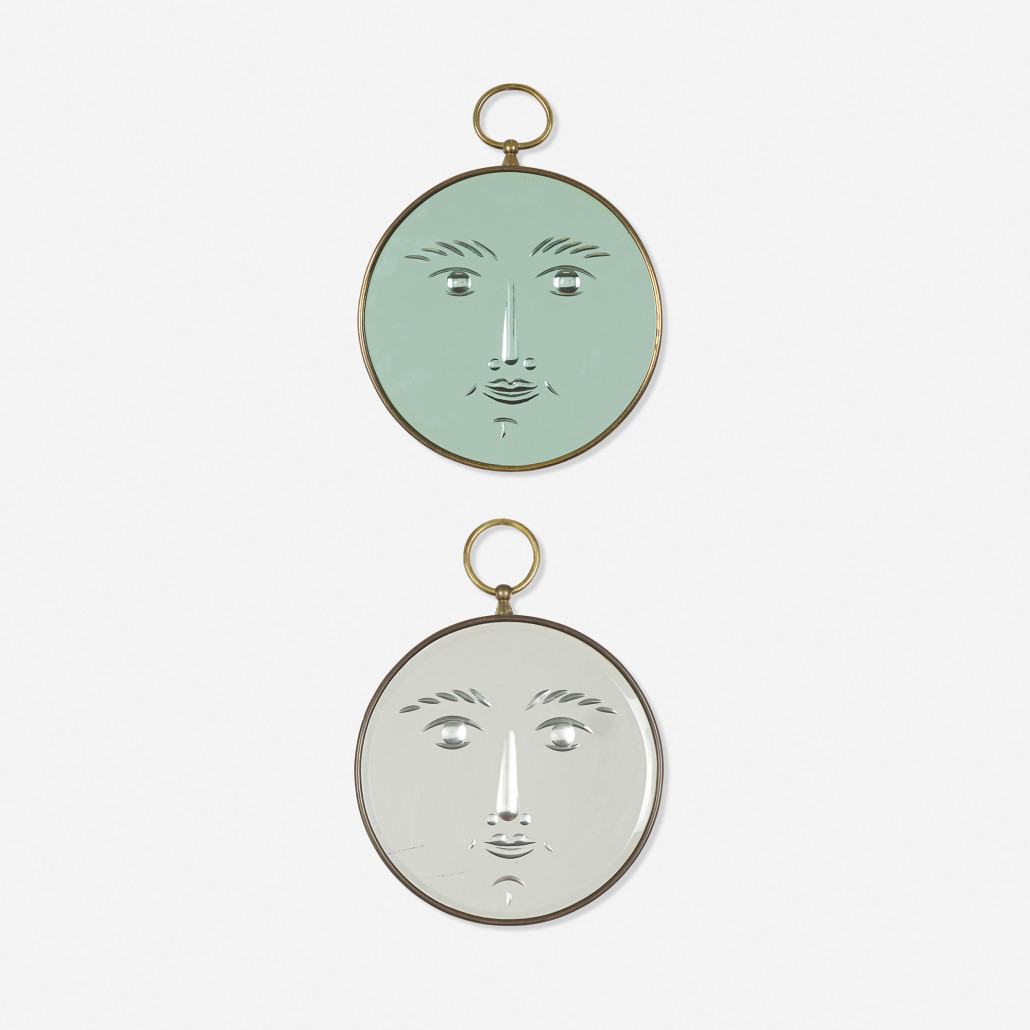 Fascinated by faces, the designer set them on a pair of brass-bound mirrors, circa 1950. One bears the identifying label ‘Fornasetti Milano Made in Italy.’ Courtesy Wright Auctions.

Barnaba Fornasetti, the designer’s son, worked with his father during his lifetime and has become the keeper of the flame since his death. Consulting extensive archives, he is able to authenticate individual works auction houses, dealers and collectors; this fact is often noted in catalog entries. The best visual introduction to the senior Fornasetti’s creative production is a tour of the innovative website created by Barnaba, www.fornasetti.com. Stop for a moment on the spellbinding animated home page, view a history with musical accompaniment, or check the lists of vendors for vintage and evolving Fornasetti family design. The best printed reference is a comprehensive volume Fornasetti: The Complete Universe, put together by Barnaba, which contains over 2,800 illustrations of the prolific designer’s work. 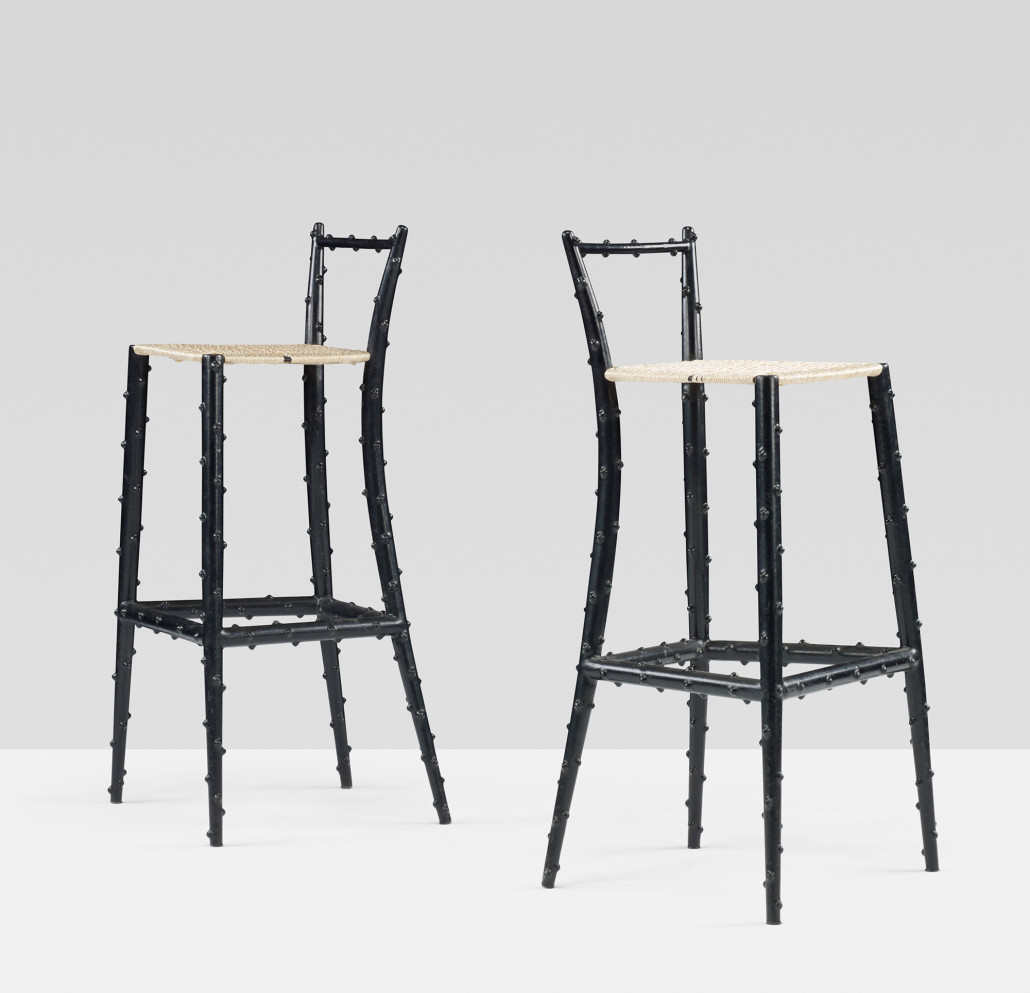 Fornasetti’s approach to practical seating – around 20 examples of this rare high stool were made of rubberized steel and nylon cord. This pair turned up at a Wright Important Design sale in 2013. Courtesy Wright Auctions.

Also on the website are images of exhibitions devoted to the designer, including a large show on view at the Triennale Design Museum in Milan Nov. 13, 2013 to Feb. 9, 2014 and the Musee des Arts Decoratifs in Paris March 11, 2015 to June 14, 2015. The English language catalog of the recent exhibition, Piero Fornasetti: Practical Madness edited by Patrick Mauries, is available from Sept. 8, 2015.