Like many of Bolmeier works, this poppy painting was started outside and completed over multiple sessions indoors.
The 11 by 14 painting is mixed media on board. Image courtesy of the artist.

Her paintings aren’t displayed in major museums, and she wasn’t represented by an exclusive gallery, but among her friends, family and community Jane Bolmeier was known as a talented and respected painter.

She was never wealthy, and she never had a chance to claim her – as Andy Warhol put it – 15 minutes of fame. Yet Bolmeier produced a considerable body of work after moving to New York City in 1957 and continued to paint until her passing July 11, 2011, at the age of 79.

Much of her recognition was through solo and group exhibitions at Westbeth Gallery, which showcases the work of residents of the Westbeth artist community in the Far West Village in Manhattan.

Bolmeier lived at historic Westbeth, a residential and studio complex in the former Bell Labs, for more than 30 years. During that time she worked to earn a living and painted for her own enjoyment. 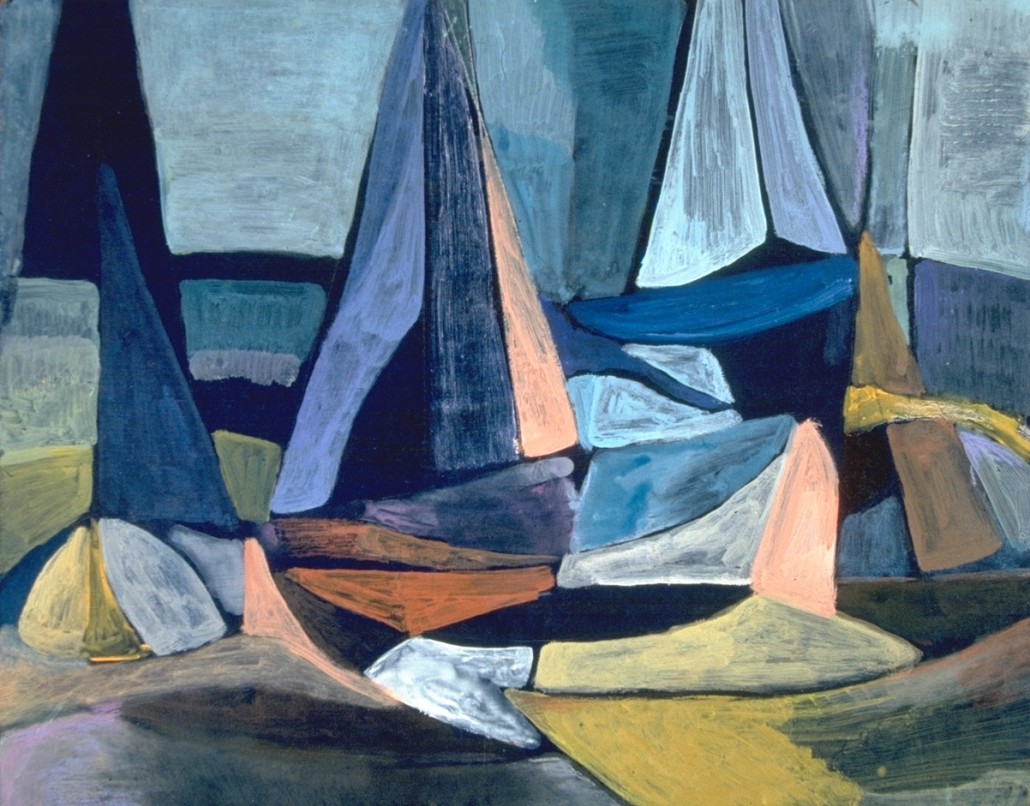 After the Storm, 1996, depicts small sailboats pulled ashore. Bolmeier’s Provincetown paintings, like this scene in mixed media on 11 by 14 board done in 1996, have become more abstract. Image courtesy private collector.

Jane Bolmeier was born Oct. 2, 1931 in Chicago, while her father was a graduate student at the University of Chicago. She and her twin sister, Joan, grew up in Jackson, Miss., where their father was a school administrator.

“When I was in junior high school and high school we lived next door to a person who was vice president of the Mississippi Art Association. Oh, the paintings she had of artists from Jackson, Mississippi, … I decided I would like to be a painter so I could have paintings in my house,” said Bolmeier in a 2008 interview.

After earning a bachelor’s degree in liberal arts at Duke and a master’s in creative art at the University of North Carolina, Bolmeier taught school for one year in North Carolina. “I didn’t like it. I wasn’t a disciplinarian,” she said bluntly. 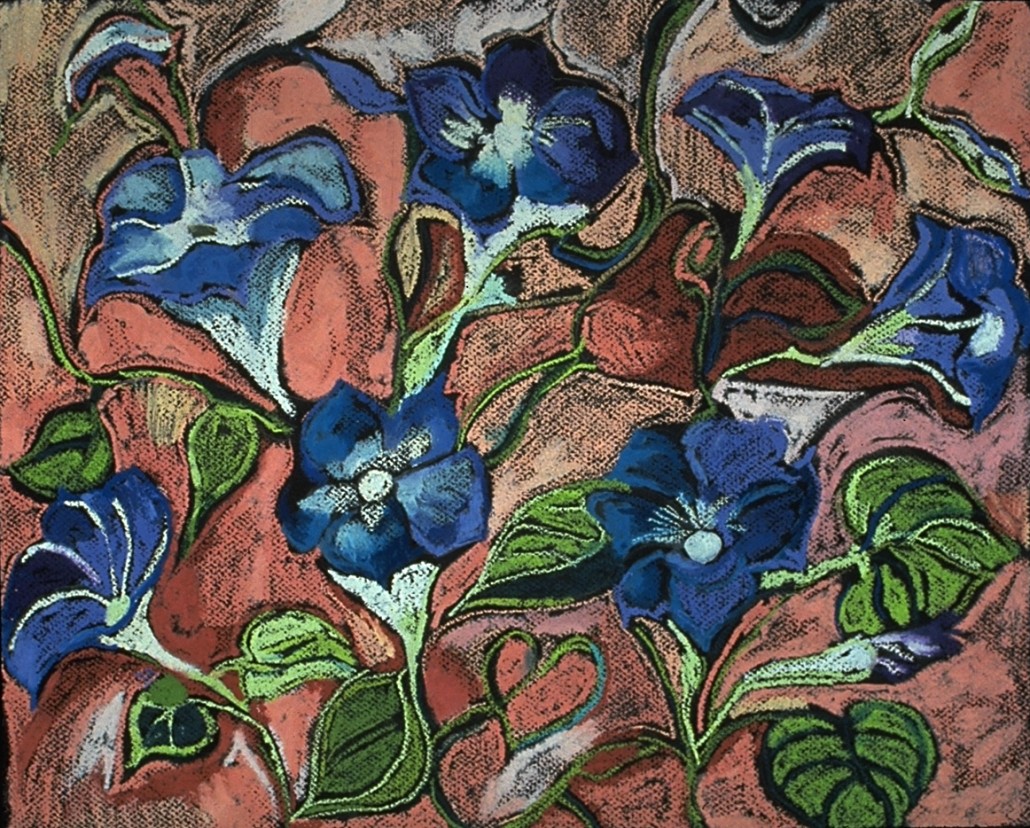 Carl, 1991. A Westbeth resident grew morning glories on the roof of the 13-story apartment complex. Bolmeier painted them in oil pastel, 12 by 24 inches, in 1991. Image courtesy of the artist.

Determined to be a painter, Bolmeier spent the summers of 1955 and 1956 at abstract painter Hans Hofmann’s art school at Provincetown, Mass., on Cape Cod. “He was one of the best teachers in the United States at that time. He had a dynamic personality and was very encouraging,” said Bolmeier, who kept for inspiration a letter from Hofmann urging her to continue painting.

To engage in that pursuit, Bolmeier knew she had to relocate. “I wanted to be a painter so I moved to New York. At that time most of the people involved in the arts lived in New York,” said Bolmeier, who found work at the Metropolitan Museum of Art. “They said if I learned to type I could have the job,” she said.

Meanwhile Bolmeier followed Hofmann’s advice. “He said even though you have a full-time job and you’re pursuing a career in art, as long you keep painting – it’s good to paint large and wild,” said Bolmeier. 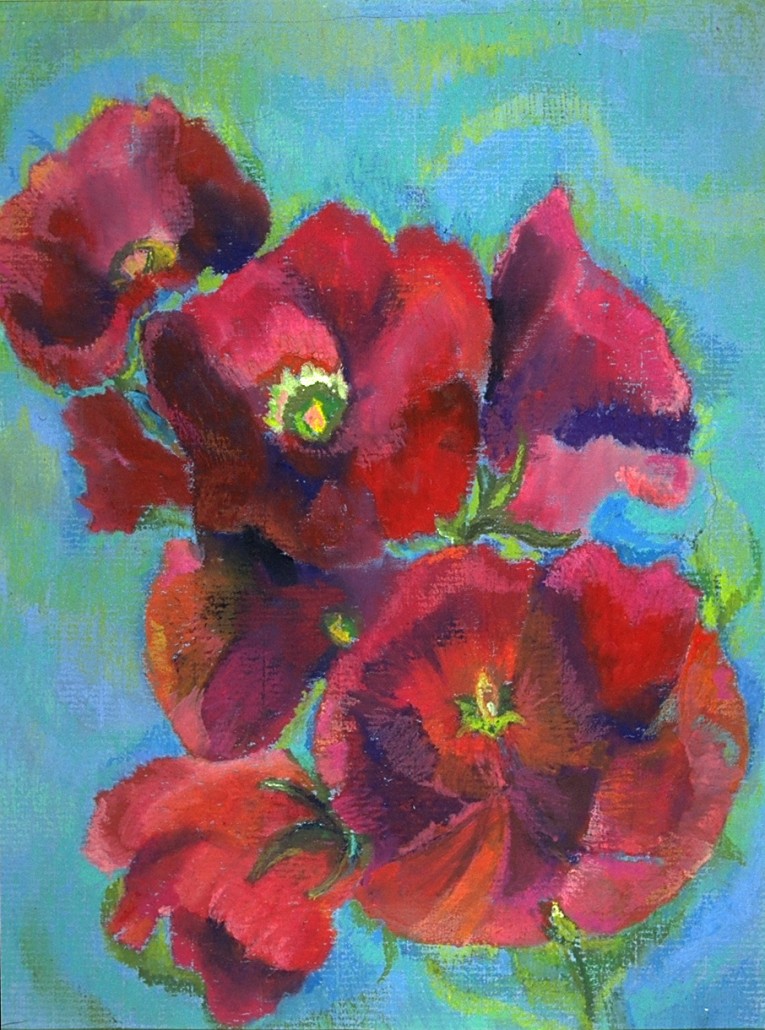 Energy radiates from Bolmeier’s oil pastel Hollyhocks, which she painted in the Westbeth courtyard in 1999. The painting measures 20 by 24 inches. Image courtesy of the artist.

Indeed she did, in 1958 and 1959 creating a series of numbered abstract expressionist paintings as large as 68 by 100 inches. Soon, however, painting such large canvasses posed a practical problem for an unknown artist. “Many painters paint large when they’re young. These things are difficult to sell, they’re hard to store and they eventually just disappear,” said Bolmeier.

While reducing the scale of her art, Bolmeier kept painting, even while working at what she describes as “regular jobs.” Those included stints at Crowell-Collier Publishing Co. and an office job at Hunter College in Manhattan, where she stayed long enough to earn a pension. “The pension really helps,” said Bolmeier, who lived in an apartment and had a separate studio at Westbeth.

“There were years at Westbeth I couldn’t paint; my space was just too small. That’s one reason I went to graduate school,” said Bolmeier, who earned a doctorate degree with an emphasis in Art Criticism from New York University. Her dissertation was titled “Rauschenberg and His Critics.” 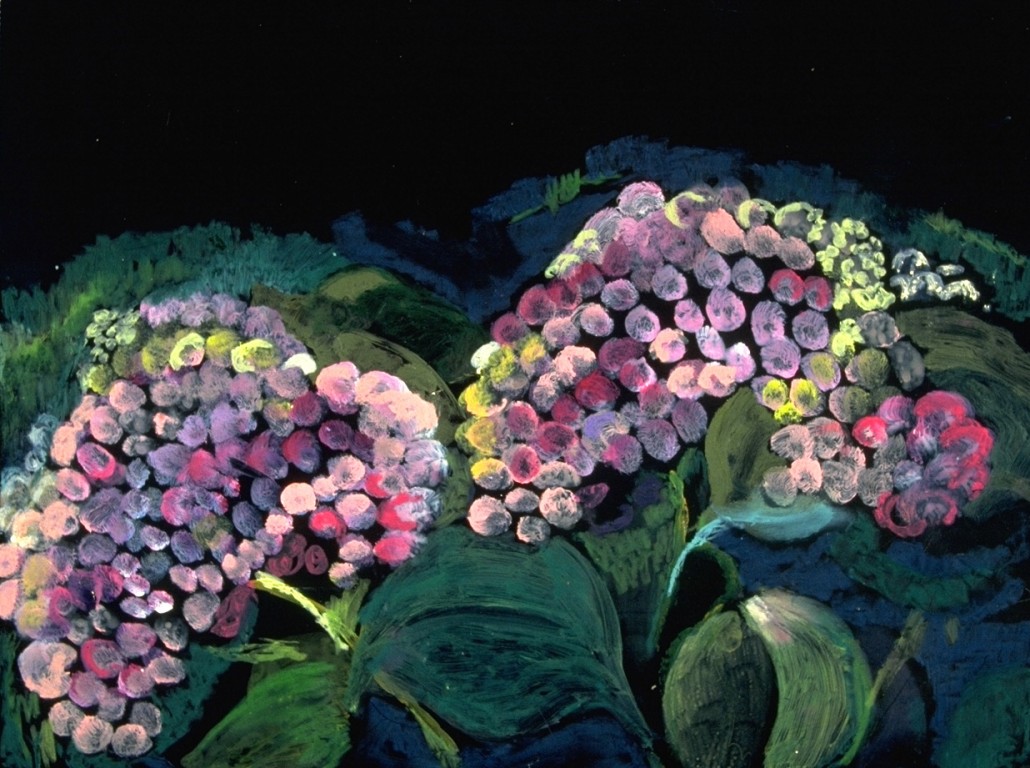 Bolmeier painted Hydrangea in 1997 with acrylics on a hardboard panel. At 9 by 12 inches, the painting was easy for her to transport. Image courtesy of the artist.

Bolmeier, like her mentor, Hofmann, had a passion for nature, which is evident in her painting, whether it’s a still life or a landscape. She loved spending Septembers in Provincetown after the crowds had left and lodging was less expensive. “I studied there with Hofmann and enjoyed painting the water, the boats … the light there is so special,” Bolmeier said.

She also found natural beauty around her neighborhood in New York. Starting in 1969 she often painted at St. Luke’s Gardens in the West Village.

“St. Luke in the Fields is a church on Hudson Street that has a beautiful garden. I painted oil pastels there. A couple of them are hanging in the meeting room of the manse,” she said. 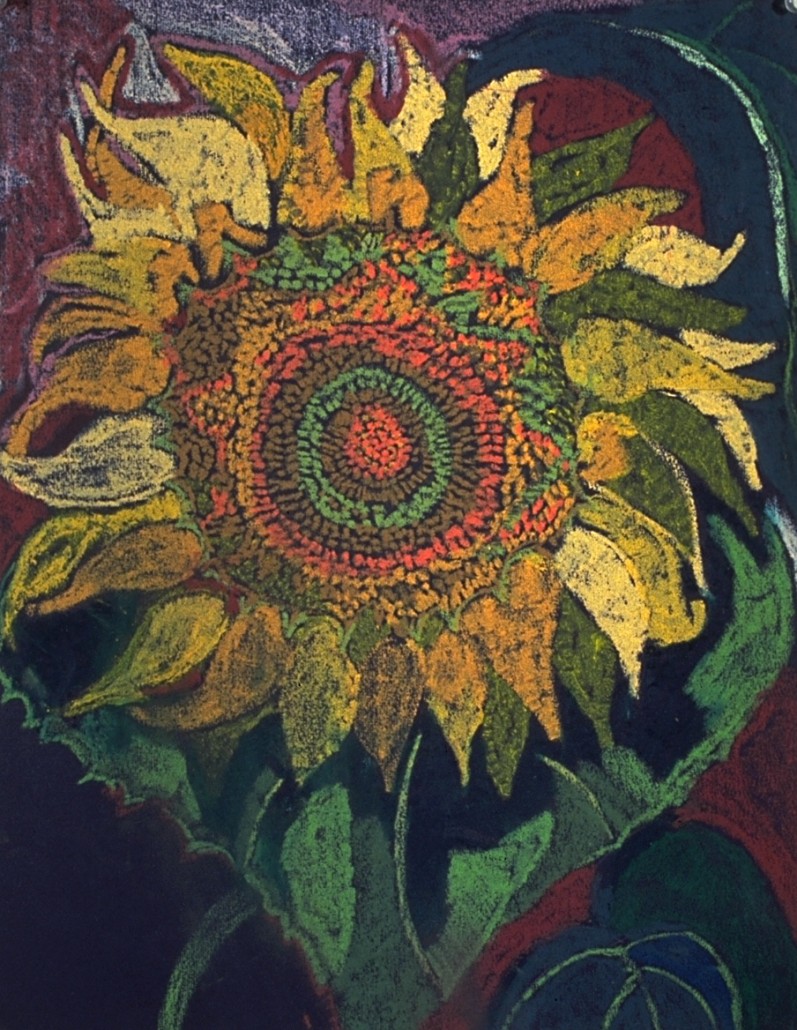 Bolmeier said that most people like her sunflower paintings more than any other subject matter. She painted this oil pastel, 24 by 20 inches, at St. Luke’s Garden in 1990. Image courtesy private collector.

While Bolmeier did not know of any major art collectors who owned her work, occasionally her paintings would go to someone outside her family and circle of friends.

“Several years ago a doctor wanted to buy a Hans Hofmann, but a Hofmann is so expensive. So he found a list of Hofmann’s students, checked on my work on my website and liked it. He lived a couple miles from here. He came over and bought two paintings,” said Bolmeier, adding that her paintings were “very moderately” priced. “Except for the very big ones, they’re less than a thousand dollars, that that’s very cheap for a painting,” she said.

Bolmeier’s output increased after obtaining her studio space at Westbeth, separate from her apartment. She worked there when New York winters prevented her from painting outdoors. It had a view of the Hudson River just across West Street. “One of the windows of my apartment looks down the Hudson River, and on a clear day I can see the Statue of Liberty, which is nice,” said Bolmeier.

The “comfort” Bolmeier’s paintings exude is what impressed Cynthia Maris Dantzic, an art professor at Long Island University. “She has the ability to transport the viewer to the spot without putting in so much of her personality and trying for a style, just trying to give you the feeling of the space, the light and the land. At the same time her work has all the criteria … color, form, composition – all those things you look for in a painting,” Dantzic told Style Century Magazine in 2008. 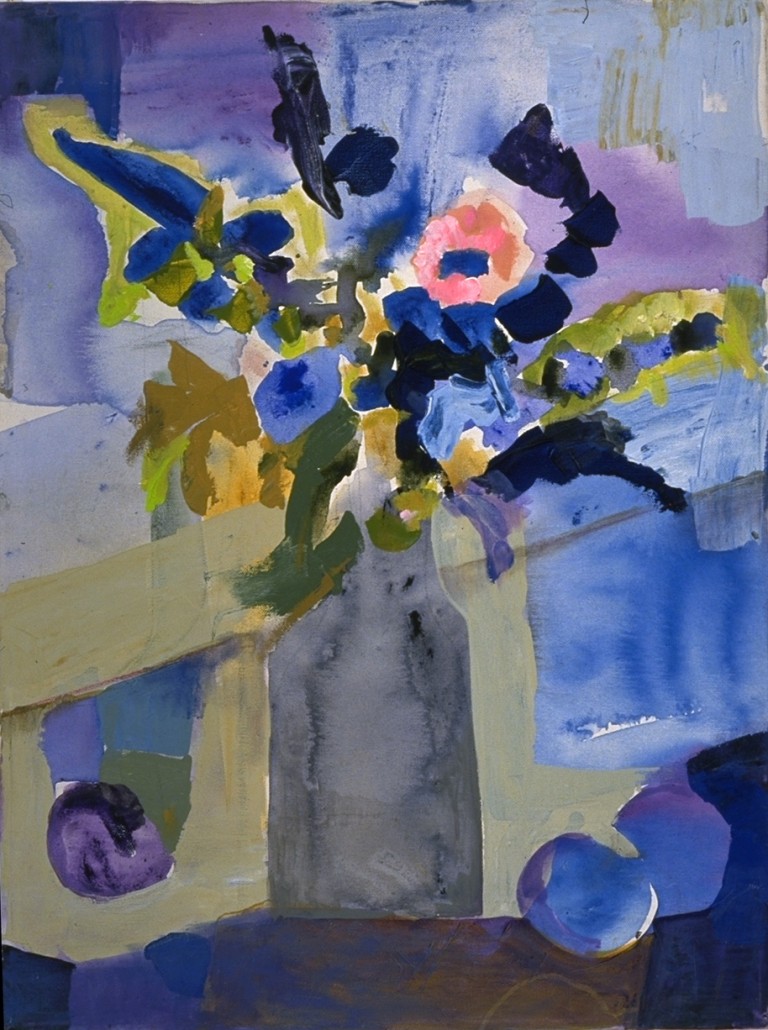 After several years away from painting, Bolmeier resumed in 1989 with this 18 by 18 inch acrylic on canvas she called Beginning Anew. She said that if any of her paintings ever became valuable, this might be one of them. Image courtesy of the artist.

Dantzic chose to feature Bolmeier in her new book 100 New York Painters on the recommendation of Bruno Palmer-Poroner, former owner of the prestigious East Hampton Gallery and former owner and publisher of Artspeak, an international art review.

“I didn’t want only to put in super-famous names like Chuck Close and Alex Katz. They’re all in the book and that’s wonderful, but I wanted to include people who might be wonderful but not known to me. So I asked people whom I respected and Jane was one of the people who was highly recommended,” said Dantzic.

Bolmeier’s small paintings were described on the Westbeth website as having “vivid hues, soft washes, deeply colored gessoed backgrounds, and a broad range of textures and movement.” 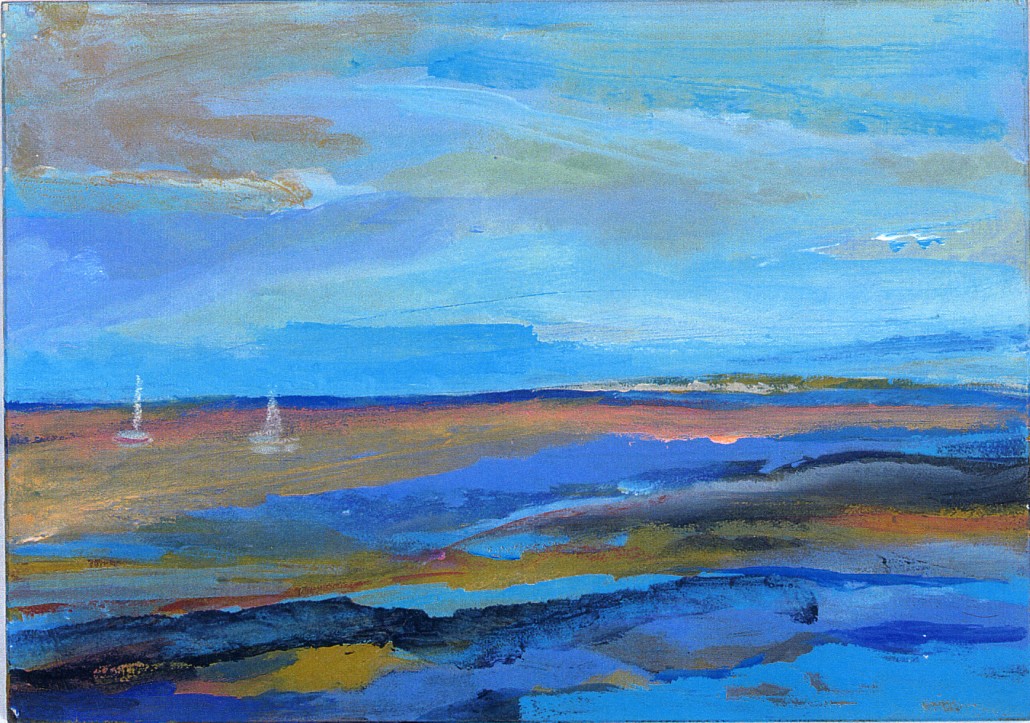 No matter the weather, Bolmeier enjoyed painting at Provincetown, where she said the light is wonderful. Image courtesy of the artist.

Though Bolmeier painted flowers throughout her career, she hesitated to call them her specialty. “I don’t know that I’m best known for painting flowers. When I first moved to New York my paintings were more subjective inward. Now when I paint I look onward at nature,” she said.

As a single woman artist living in New York City in the freewheeling 1960s, one might have expected that Bolmeier had a wild side. “Probably not,” she said, dispelling the notion with a chuckle. “I painted wild because basically I was not wild.”