Italian designer Lino Taglipietra (b. 1934) emerged from the traditional Venetian glass workshops in Murano to become a catalyst for innovation in the international studio glass movement. 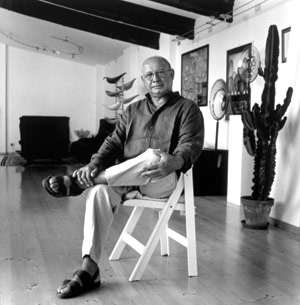 Lino Tagliapietra in his Murano studio around 1998. Photo by Francesco Barasciutti.

In 2009, the Smithsonian’s Renwick Gallery in Washington, D.C.,  presented an exhibition titled Lino Tagliapietra in Retrospect: A Modern Renaissance in Italian Glass. It brought  together 140 examples ranging from simple early pieces to brilliantly complex works.

Tagliapietra is an artist who has increased in creative power over six decades. Already a maestro in Venice in his early twenties, he had a command of classic techniques, some of which date back to the Roman period. Rather than remaining in his homeland, the artist chose to share what he knew in other countries. The resulting cross-pollination not only enriched his students, but altered Tagliapietra’s approach to his own work.

Susanne K. Frantz, former curator of Twentieth-Century Glass at the Corning Museum of Glass in upstate New York, curated the Renwick Gallery exhibition and is the author of the accompanying catalog, a must for any glass collector. In a recent interview, she explained what happened when Tagliapietra first came to teach at the Pilchuk Glass School near Seattle in 1979: “Lino hadn’t met any of the Americans until he came to the United States. They were very creative and willing to take chances – they just didn’t have the technical know-how. It was pretty much trial and error.”

At first, she explained, “Italians came over and demonstrated their technique, not really even teaching. Lino didn’t speak any English at all. At Pilchuk, he would just make the things that he made. Someone would ask about a technique and he would demonstrate that and the others would watch. That was a huge eye-opener, just these very subtle movements.”

Frantz noted the results: “Over the years, he was able to help them. In order to accommodate Lino and the other artists who came over, they would improve the working environment and materials. It really did change international glass. If you look at American studio glass, most of it was so crude at that time. It raised the technical level not only in American studio glass but studio glass worldwide.” 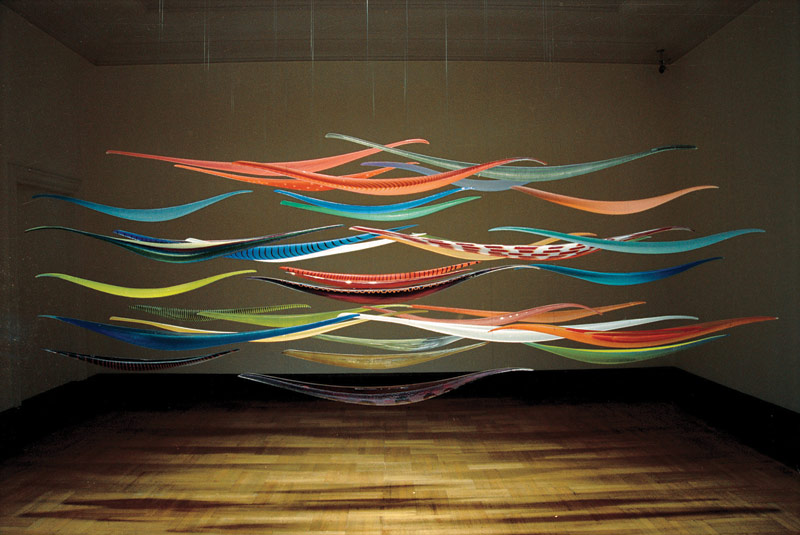 Just as dramatic was the effect that this marrying out of his gene pool had on Tagliapietra. Frantz continued, “They helped each other; it wasn’t a one-way street. It’s interesting how Lino gave so much, but he got so much too. He had all the instincts, but Lino had never been in an environment like he encountered in the United States. It encouraged him to develop his artistic ability.” [Ed. – Pilchuk was co-founded by renowned glass artist Dale Chihuly and patrons Anne Gould Hauberg and John H. Hauberghe.]

The Tagliapietra exhibition catalog explained important techniques that the Italian artist had mastered and was able to pass on, such as inciso, a decoration of narrow parallel lines cut into the surface of cooled glass. Incalmo is a tricky process where two or more bubbles of molten glass that have been opened are aligned and joined. He also came up with new methods, such as “Pilchuk ’96,” a multi-step technique which allows the worker to produce lines of color running vertically or diagonally through the blown glass.

Once stimulated, Tagliapietra’s design innovation has never stopped. The curator pointed out, “In the past 10 years, he has really exploded. I even asked him what happened. Some people when they hit a mature age, the creativity just explodes.” Her words are strongly supported by works from this decade in the exhibition, such as Nubia (2000), a blown triple-incalmi glass piece with white and black canes, or the colorful blown and cut Stromboli (2004). Tagliapietra continues to divide his working life between Italy and the United States. 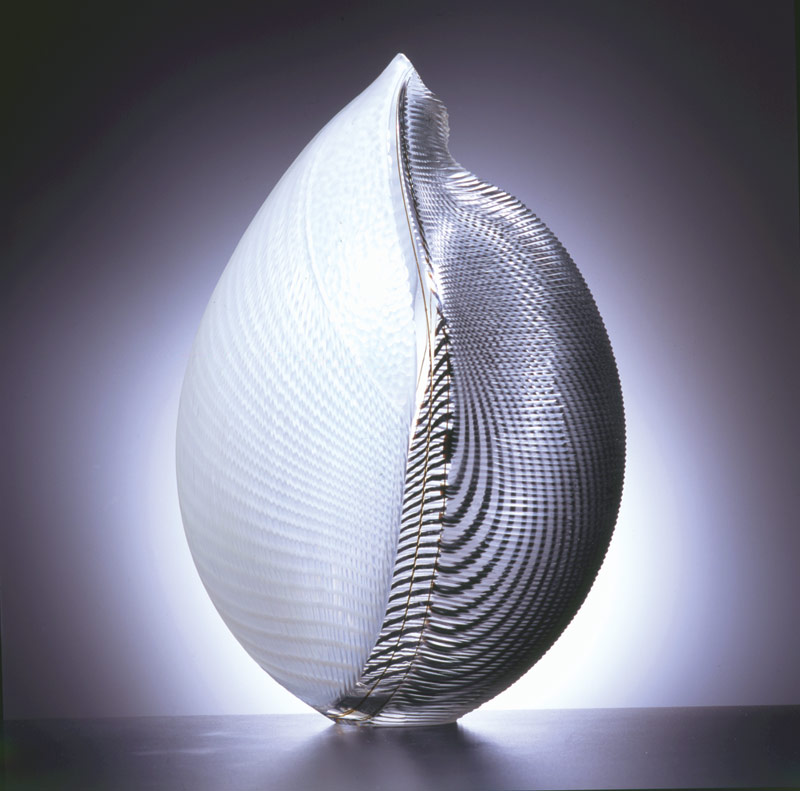 Although much of his output has already entered public and private collections, Tagliapietra’s works occasionally appear at auction. In 2006, for example, the Chicago auction house Wright sold a 1991 vase from the glassmaker’s “sgraffito art” period for $10,200. Talking recently with SCM, Richard Wright praised the artist as the top living master from Murano, after the Venetian district’s reemergence as a great glass center in the 1950s.

Wright pointed out his ability to go beyond what had been done previously: “Lino takes that great tradition and the techniques that are there, and gets it away from the functional – he elevates it to art. He does some very large sculptural pieces. The boats are amazing. It’s clearly true that he gets better as he gets older. The way he’s improved over his career is the idea of taking traditional techniques and pushing further, pushing further.”

Mark Hill has been a specialist at both Sotheby’s and Bonham’s, and is currently a contributor to Judith Miller’s series of Collector’s Guides, including the one on 20th-century glass. Above all he is an avid collector of studio glass. He spoke with SCM about what makes Tagliapietra’s glass exceptional. “In glass, no techniques are new as such. The core-forming of vessels all the way down to the use of colored glass in rods was practiced by the Romans. But it’s what you do with those techniques that brings in the novelty in glass.”

“These vibrant colors, organic forms – they look almost as if they’ve grown on the end of an alien plant.”

“His pieces are staggering,” Hill continued. “The thing that really gets me when you look at a Tagliapietra piece is the incredible size; it’s something you can only really appreciate when you’re standing in front of the object. It’s the scale of the piece, handling such a sheer mass of glass to create such an elegant object, as he does, is a demonstration of great virtuosity and experience.” Hill praised Tagliapietra’s “incredible use of color…He’s very Italian in that way. These vibrant colors, organic forms – they look almost as if they’ve grown on the end of an alien plant. There’s so much of Italian glass in Tagliapietra’s work, but at the same time, the studio side of it freed him up from carrying on more traditional styles.” His forte, according to Hill, is his use of classic techniques in new ways to produce the most amazing optical effects.

“The studio glass market in general is thriving,” Hill observed. “It’s an area I feel that’s very strong for the future. It’s not a case that the oldest is always the best. A piece produced yesterday might have much more interest and fetch more. There has been a development of skills over the last 10 or 20 years. The great thing about studio glass is that every single object is unique, an artwork in glass. And with studio glass, the artist invariably puts his mark on it.”

Before Lino Taglipietra in Retrospect opened, Robyn Kennedy, Chief of the Renwick Gallery, stated: “This exhibition is a wonderful chance to highlight the work of one of the elder statesmen of glass. Lino is not only an educator and exquisite craftsman but one of the most innovative glass artists today. His work continues to develop and push the boundaries of the medium.”

She later observed in an interview with SCM, “The show has been terrifically well received – people love it. Some have said it is the favorite show they’ve seen at the Renwick.” Kennedy was surprised to find on meeting the artist, “He’s almost nonchalant about some of the techniques he uses, like the incalmi works where he’s putting two pieces of glass together. He was always an advanced craftsman, and he has revived techniques that were lost.”

Most important, she said, “Lino was very pleased with the installation here. And our lighting designer had the time of his life.”

The exhibition was organized by the Museum of Glass in Tacoma, Wash. (www.museumofglass.org), where it first appeared. Another great destination for collectors is the Corning Museum of Glass in Corning, N.Y. (www.cmog.org), which has an ongoing Masters of Studio Glass Series.