Rauschenberg in a personal moment, strolling Florida’s Captiva Beach with his dog, Sapphire, in the early 1990s.
Captiva Island provided the perfect refuge for the artist, and it is there that he chose to live out the last period of his life.
Photo Courtesy of The Guggenheim Museum, NYC.

He hated the term neo-dadaism, which all too frequently was used to describe his work. He was, perhaps, a father to pop art but certainly not of that school. Nor could he be pinned down on the canvas of abstract expressionism.

To his legions of admirers and to the collectors who avidly seek his work, he stood alone, as Robert Rauschenberg. To his friends he was simply Bob.

In the wake of his May 2008 death, at the age of 83, he left a huge body of influential work that is as varied and seamless as was his tremendous creativity. Still, try to stick an “ism” on Rauschenberg and he simply slips free of it.

While it was Rauschenberg’s “combines” from the 1950s that earned him his reputation early on, his interest in art and creation was born long before that decade and continued to grow and shift in unpredictable and wonderful ways for another half decade. His significant work brought American art out of the intentional vagueness of abstract expressionism and paved the way for the sharp and colorful challenge of pop art. His work has been rightly studied, celebrated and exhibited – both in his long life and in the short time since his death – and scholars, critics and curators alike will likely continue to debate his relevancy for centuries to come.

“The future will be far more tolerant and engaged when it comes to his work,” said Susan Davidson, senior curator of Collections and Exhibitions at the Guggenheim Museum. Davidson was also lucky enough to be numbered among Rauschenberg’s close friends in the last 20 years of his life. “Bob’s impact is yet to be really understood,” she said.

As a curator at one of the major Modern art museums in the world, Davidson is in a unique position to make such a prediction about the future impact of Rauschenberg’s various canvases. The real question is, would he even care to know what any critic – harsh or friendly, past, present or future – thought of his work?

Most likely not, especially as we’re talking about Rauschenberg the full-fledged master. Early in his career, in the 1950s and 1960s, Rauschenberg took a beating at the hands of critics – most of whose names are now lost to history – who took him to task for any number of issues, although it was his combines – multilayered with found objects – that really tweaked the New York City art establishment. Rauschenberg would wander the streets of Manhattan gathering detritus to be included in his pieces and, alchemically, turn them into art. There was no identifiable process or style to them, it was reasoned, and they could not be neatly packaged and put on a wall. For this, critics attacked him. In some art circles of the day it was said that he produced too much work for any of it to have lasting impact or value. 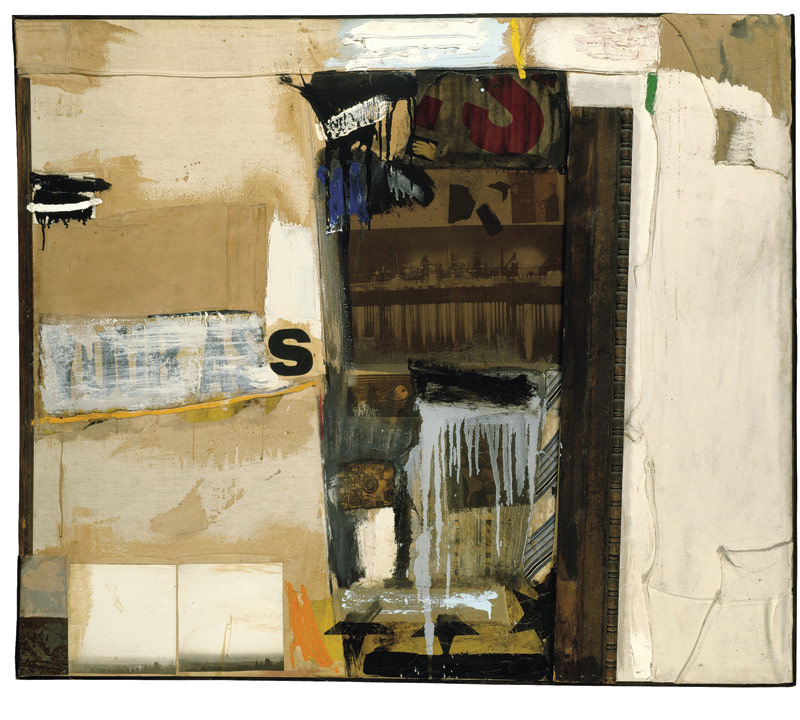 Rauschenberg’s Photograph, 1959, shows – through painting – the artist’s love of and respect for the art of photography, which deeply influenced him at an early age and remained a favorite medium throughout his life. It sold for $10,680,000, as part of Sotheby’s New York Contemporary Art Evening, May 15, 2007. Image Courtesy of Sotheby’s.

“It’s ironic that (critics) felt this way about Bob’s work,” said Davidson. “The interesting thing is that, now that all is said and done, Bob produced less than Warhol.”

It’s fair to say that not everything Picasso, Monet or Pollock put their brushes to came out immortal. Why, then, was Rauschenberg taken so strictly to task for his prolific output?

History – to a limited extent – has already been and will be the judge of Rauschenberg’s work. So far he seems to be holding up rather well. By the time he reached the late 1960s, with his name as widely recognizable as any in the art world, and his work consistently selling high, Rauschenberg moved past criticism completely and into the world of his boundless imagination. According to Davidson, in the last half of his life Rauschenberg was as immune to criticism as he was to talk of how important he was as an artist. When it came to creation, it was process and not product. Money and fame were incidental.

“Bob had a long career, and he spent a good part of it struggling and fighting against critics,” Davidson said. “In the end, though, he was just dedicated to making his art, to what he was doing now. He was well aware of what he achieved, ultimately, but he wasn’t living on it. He was so engaged in his work that nothing else mattered.” 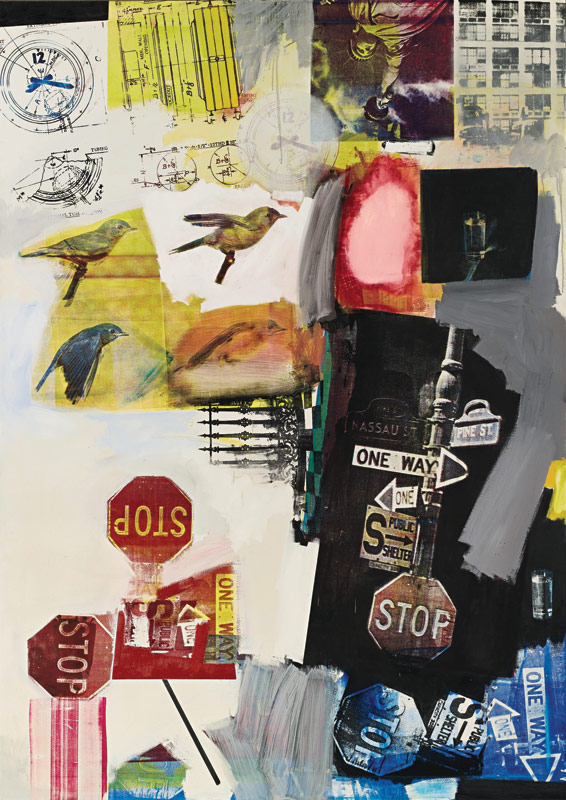 Robert Rauschenberg, Overdrive, 1963 — Oil and silkscreen ink on canvas, 84 inches by 60 inches. When this silkscreen-on-canvas work sold for $14,601,000 on May 14, 2008 as part of Sotheby’s New York Contemporary Art Auction, its price set a record for a Rauschenberg at auction and confirmed that the artist had achieved top-tier status. Image courtesy of Sotheby’s.

To arrive at the place of total engagement with his art, Rauschenberg took a storied path. He is arguably the most famous resident to come out of Port Arthur, Texas – although fans of Janis Joplin might argue that point. Rauschenberg would take little of the coastal Texas landscape of his youth to the cosmopolitan, world-wise and well-traveled Manhattan of his art career. Ultimately, he would spend his twilight years quietly painting away on Captiva Island, off the shores of southwestern Florida.

Despite having minimal formal training, which came in the form of a brief stint as a student in Paris and a legendary year at Black Mountain College in North Carolina, Rauschenberg was principally a self-taught artist. If not an outsider exactly – given his ability to switch his focus and his medium – he was certainly not an academic. Throughout his early years he was involved in theater at his high school, then, during a stint in the U.S. Navy, Rauschenberg started to draw in earnest. It was here that he realized what he was meant to do.

“He began to wander the New York Streets and pick up found objects to incorporate into his work. In finding this freedom and spontaneity…he inspired an entire generation of young artists seeking alternatives to traditional ways of creating art.”

“No, Bob really wasn’t a trained artist,” Davidson explained. “It just came naturally to him. He was certainly drawing in high school, and making costumes and being involved in the arts in a strict way. In the Navy, though, he really started to look at art. It was maybe a five-year journey, but he was set. I remember one Sunday morning, talking with him over breakfast, and he told me, ‘I didn’t have a choice. I had to be an artist.’”

From the Navy, Rauschenberg made his way to the Kansas City Art Institute on the G.I. Bill, and from there to the Académie Julian for a brief, but important, stopover in Paris. While he associated with many European luminaries from the scene, he quickly grew disenchanted with Europe and made his way to Black Mountain, where he would meet and work with artists as varied as Knox Martin, Merce Cunningham and John Cage. There he also met fellow artist, lifelong friend and sometime lover Cy Twombly. It was here he began his radical artist evolution into the role of master of minimalism. The full flourish of that brilliance, however, wouldn’t come until he left Black Mountain – as well as his marriage to Susan Weil, with whom he had a son, Christopher – and threw himself into the artistic entropy of New York City. Within a year he would start showing at the Betty Parsons Gallery, 1951.

By the time he had his first solo show in 1954 at the Charles Egan Gallery, Rauschenberg had produced his first radical departures in art in a series of 1952 and 1953 paintings called, respectively, the Red, White and Black paintings. He layered color and played with light in a way that was unheard of in his White Paintings, but it was the Red and Black paintings that showed the first collage-like combinations that would evolve into his groundbreaking combines. He began to wander the New York Streets and pick up found objects to incorporate into his work. In finding this freedom and spontaneity – the traits that so infuriated critics and frustrated sensibilities – he also inspired an entire generation of young artists seeking alternatives to traditional ways of creating art.

Robert Rauschenberg’s Primo Calle/Roci Venezuela — In this piece, the artist’s deep love of photography is evident. This work sold in November 2007 for $2,617,000 at Sotheby’s New York Contemporary Art Evening. Image courtesy of Sotheby’s.

Throughout the 1950s Rauschenberg dedicated himself to his radically different combines. It was in 1958 that Rauschenberg created Erased DeKoonig for a show at the Leo Castelli Gallery, a work that Davidson points to as absolutely seminal – more so than his combines – in the evolution of his work. He literally erased a DeKoonig drawing and hung it in the show.

“It was a very important work for Bob, in that he was not only making homage to Willem, but also making a statement,” she said. “The fact that he could take a piece of art, erase it and make an entirely different artistic statement all his own was an incredible thing.”

It was in these two works that Rauschenberg showed his supreme ability to turn convention on its head, to make art that was provocative and unconventional. Conceptually it was very simple, but philosophically it was richly and deeply complex, and completely new to the world of art. 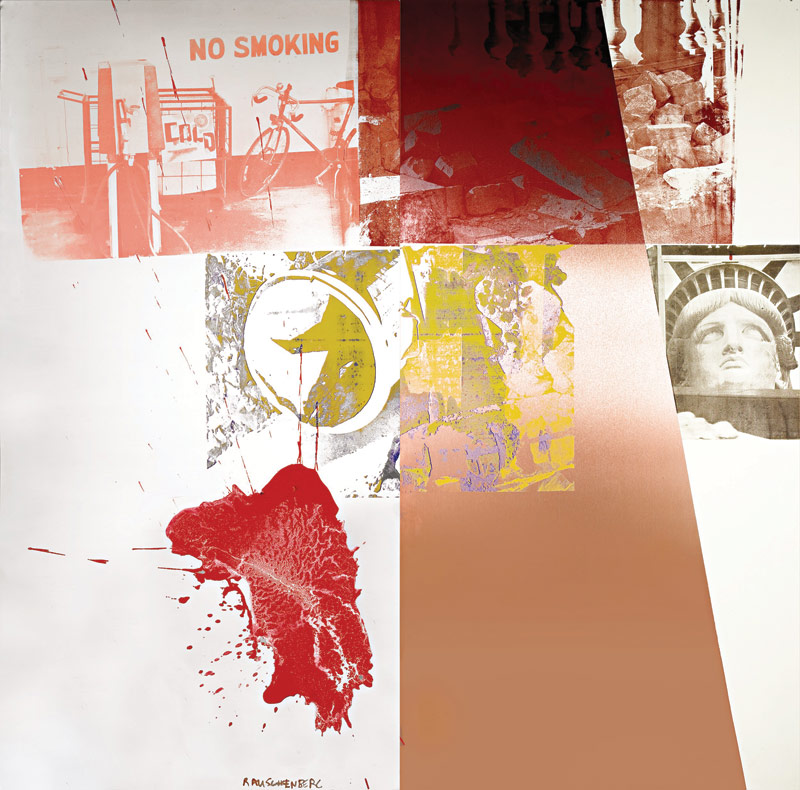 Robert Rauschenberg, Half Dime (Urban Bourbon) — This is one of the artist’s more inscrutable paintings from the late 1980s, though it clearly shows his ever-increasing subtlety with color, and mastery over the lines and movement of his work. It sold for $684,000 as part of Sotheby’s New York Contemporary Art Day, May 16, 2007. Image courtesy of Sotheby’s.

Rauschenberg continued to grow and evolve throughout the late 1970s and 1980s. Never one to rest on his laurels, Rauschenberg began incorporating photographic elements into his work, moving from three dimensions into two, and showing his lifelong fascination with, and love of, photography. He experimented with printmaking, sculpture and performance art. He even made an impact in the music industry in 1983 when he did the cover art for The Talking Heads album Speaking in Tongues, for which he won a Grammy.

In 2003 Rauschenberg finally retired full time to Captiva Island, where he would paint, entertain guests and live the rest of his remarkable life in peace, quiet and comfort. To the end, he eschewed labels, and by the time of his death there was not a critic alive who could question a move he had made in his long and fruitful career. There was never an “ism” to describe him, nor is there ever likely to be.

Through all the art movements, scrutiny and scholarship, in the end Rauschenberg’s work and life will always defy such labels. The only way to describe his art, really, is to say, “It’s Robert Rauschenberg.”