The horizontal bands on this 9-inch vase from the early 1950s is a feature known as Tiffin Optic. It’s supported by a Manzoni foot. Image by Tom Hoepf. 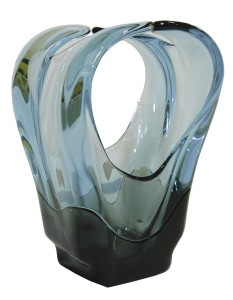 Tiffin’s popular Twilight color was paired with Smoke in this Empress line flower arranger, which is 8 inches high. Image by Tom Hoepf.

The exceptional quality of glass produced by Tiffin kept it profitable as other factories of the parent U.S. Glass Co., founded in 1892, were forced to close. With the closings of most of its factories, U.S. Glass Co. moved its headquarters from Pittsburgh to its Tiffin glasshouse in 1938.

It began an era of glassmaking in Tiffin marked by continued fine quality, brilliant colors and innovative designs. The most intriguing of these are loosely called Tiffin’s Modern lines.

“He was really a great fan of the Swedish glass and that modern look,” said Ruth Hemminger, president of the Tiffin Glass Collectors Club. “That’s what Swedish glass was; they were known for very clear crystal.” 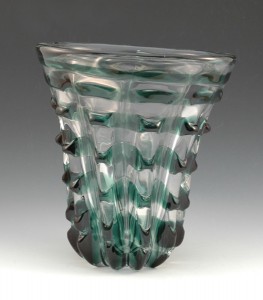 Crafting Tiffin’s Ribbon line of the mid-1950s entailed applying a colored ribbon of glass to the outside of a vase or bowl, reinserting the object into the mold and pressing the ribbon into the molded ribs. This 8-inch vase is in Green Fantasy, the most common Ribbon color. Image by Tom Hoepf.

To ensure Tiffin’s Swedish Modern was superior-grade glass, Carlson insisted on strict quality control, including the use of optical grade silica.

“They used a lot of lead in their glass. They used good raw materials. The quality is there, no question about it,” said Hemminger. “Many department stores carried it for that reason. It was good glass and it sold well. People that were discriminating bought it and were happy with it.”

“They helped teach the Tiffin workers how to make this glass. They were influential and helpful as far as design and new techniques,” said Hemminger.

The blown and handworked glass was immediately successful. Kelly O’Kane in his book Tiffin Glassmasters: The Modern Years noted that by 1945, U.S. Glass Co. stock was worth $30 a share. It had been worth 30 cents a share when Carlson took charge. 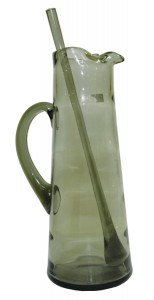 No alcoholic drink epitomized the modern lifestyle of the 1950s and ’60s like the martini. Tiffin made several sizes of Martini Jugs, this one in smoke with Tiffin Optic. Image by Tom Hoepf.

Complementing the bold crystal designs were Tiffin’s decorators, who often added engraving, etching and enameling. The book Tiffin Modern: Mid-Century Art Glass by Hemminger, Ed Goshe and Leslie Piña lists more than 30 glasscutters employed by the company, though much of their work was done on traditional crystal stemware.

Gold encrusted floral designs were also applied to Tiffin’s Modern forms in the 1940s. These designs were most often applied to the colors Crystal, Copen Blue (light blue) and Killarney (deep green).

Tiffin Glass has been highly regarded for its colors. The palette in the 1940s also included Amber, Cobalt Blue and Wistaria (pale pink to deep rose). Tiffin’s most famous color, Twilight (lavender), was introduced in 1951 and remained in production until the company closed 29 years later. Under florescent lighting the color of Twilight changes to a pale blue.

Hemminger said that Tiffin and Heisey produced glass in some of the same colors, but side-by-side comparisons show that Tiffin’s colors are more vibrant. “If you put them together you can see that Heisey is more subtle and lighter in color. Tiffin is kind of bouncy. It just has darker, deeper colors.” 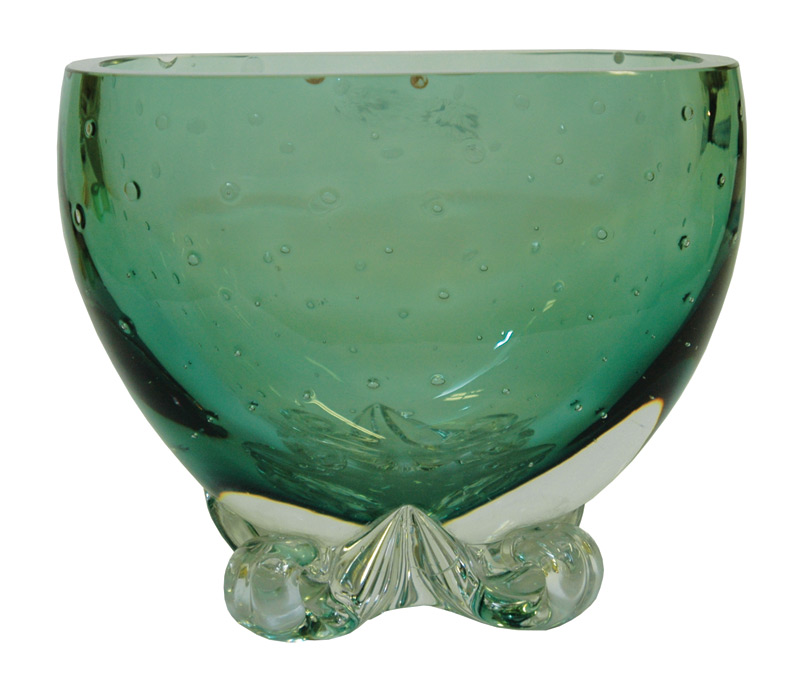 Tiffin’s pine color had a slight yellow cast and was in limited production from about 1952-1956. This Bubble Optic vase has a Manzoni foot. Image by Tom Hoepf.

Tiffin Modern glassmakers regularly made use of optics, handwork techniques to shape the glass, creating striking optical effects. Perhaps the most prominent was Swedish Optic, renamed Tiffin Optic in July 1946 to denote it was made in America. This optic appears as wide horizontal bands on the sides of vases and bowls.

Developed at Tiffin, 10-Rib Optic was widely used from 1940 through the 1970s. Use of a spinner mold created 10 curved ridges on vases, bowls and ashtrays.

With 5-Rib Optic, introduced circa 1952, five lobes of glass were molded into the base of objects.

Many Tiffin Modern pieces are often recognizable for their distinctive hand-fashioned, applied feet. The Cellini line, in production from 1947 to the mid-1950s, featured a delicate openwork stem that required the expertise of the most skilled craftsmen to form. 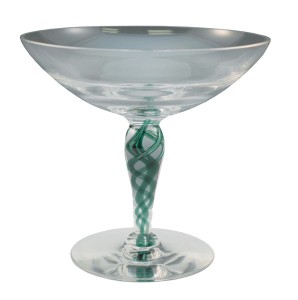 Tiffin featured an Air Twist Stem at the Glass Trade Show in January 1953. This example is a no. 14 6-inch compote in Crystal with Pine offhand Air Twist and Tiffin Optic in the bowl. Image by Tom Hoepf.

Likewise, the Manzoni Foot was a handworked base applied to the bottom of a blown bowl. A tool similar to needle-nose pliers was used to shape four curled feet from a gather of glass. The most commonly found base on Tiffin Modern pieces is the 17430 Foot, which was shaped with a wooden tool similar to a ruler. The result was an applied base with four V-shaped feet.

The largest Empress vase, 6592, is 28 inches high. Another Empress form known as Aladdin’s Lamp, 6617, is 22 inches in length. Empress was a huge success from the start. For reasons unknown, however, Tiffin discontinued the Twilight and Green combination by the end of 1959. The brief production run makes that combination especially desirable to Tiffin collectors.

Also popular with collectors are pieces from Tiffin’s mid-1950s Ribbon line, which features a ribbon of colored glass spiraling around a ribbed object made of Crystal. Of the six colors used, Green Fantasy is most often found.

Discovered much less often are pieces from Tiffin’s Mica and Craquelle (Crackle) Glass lines, which were produced in limited numbers in the 1950s. Also scarce and highly coveted are 1940s vases and rose bowls in Cobalt Blue with so-called “Opal Loops.”

Modern ware became a major part of Tiffin’s output in the 1950s and ’60s, said Hemminger.

“They were still doing stemware, but stemware use started to decline in the 1950s. That’s when other types of glass took over, and Tiffin wisely stayed with Modern because it was selling. It carried them over when other companies went out of business,” said Hemminger, noting the closings of A.H. Heisey & Co. and Cambridge Glass Co. in the 1950s. 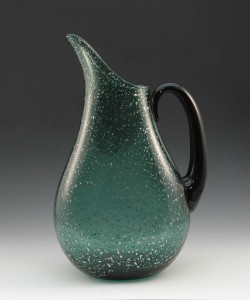 Tiffin produced a line of cased glassware named Mica in the early 1950s. Like most of Tiffin’s Mica pieces, this 12 1/2-inch pitcher is in the Pine color. Image by Tom Hoepf.

Interference from USGC stockholders prompted Carlson to step down as president and led to bankruptcy in 1962. The factory closed for several months but reopened in 1963 as the Tiffin Art Glass Co. C.W. Carlson Jr. and three employees purchased the company. Several changes in ownership took place before production finally shut down in 1980.

Tiffin Modern has become the most popular form of Tiffin Glass among collectors, surpassing its satin glass of the 1920s. Generally, Tiffin Modern pieces in colored glass are in higher demand than those in all Crystal.

“Some colors aren’t so great, like Greenbrier and some of those colors that had their time in the ’60s,” said Hemminger. “Tiffin’s basic colors – Twilight, Wistaria, Copen Blue – are what people are looking for most.”

Tiffin had sales offices in London, Sydney and New York and shipped its glassware worldwide. It can be found virtually almost anywhere.

Usually unmarked except for a shield-shape foil label, Tiffin Glass is most often recognized by its shapes and colors. The Modern lines are distinctive.

Nevertheless, similar wares by competitors can cause confusion, said Hemminger.

“New Martinsville, when they became Viking Glass (1944), was making some similar shapes. Blenko was doing some (Modern) things but theirs were taller vases, heavy and the colors were different,” said Hemminger.

Today foreign glassmakers are producing colors similar to Tiffin’s Twilight and Wistaria, but the shapes are different. Hemminger said that these items are sometimes misrepresented as Tiffin.

The 6553 Flower Basket in Ruby and Crystal was one of the most popular pieces from the Empress line. This basket has an engraved monogram “H” on one side. Image by Tom Hoepf.

“Most of the things Tiffin did had line numbers and documentation. Now and again there would be something (unique) they would do for trade show that didn’t sell and could be out there,” said Hemminger.

Prices of Tiffin Modern range from about $40 for vases and bowls made entirely of Crystal to $200-$300 for large pieces in popular colors and styles.

“Some of the things that we now know how rare they are, like the Mica and Opal Loops, are selling for far more than what we have listed in our book,” said Hemminger.

Visitors to the Tiffin Glass Museum are often amazed by what the local glassmaker produced, said Hemminger.

“We see people come in who collect Fostoria and some of the other companies. They’re loyal to what they’ve collected, but they often say, ‘We could get into Tiffin Glass really easily.’”

7 things you should know about Tiffin Modern glass lines

Furniture Specific: Listen to the glass
Scroll to top