In the years since Tony Duquette’s death at 85, the designer’s reputation has grown, due in large part to the efforts of Duquette’s longtime business partner, Hutton Wilkinson.

A big, glossy monograph by Wilkinson, with Wendy Goodman, was published in 2007 (Abrams) and there’s a new line of Duquette’s designs in production by Baker Furniture. The designer’s original jewelry and objects have fetched strong prices at auction. And a small offering of jewelry is still made by the Duquette studio for sale at Bergdorf Goodman and select Saks Fifth Avenue stores. The line is designed by Wilkinson, in keeping with Duquette’s oeuvre. 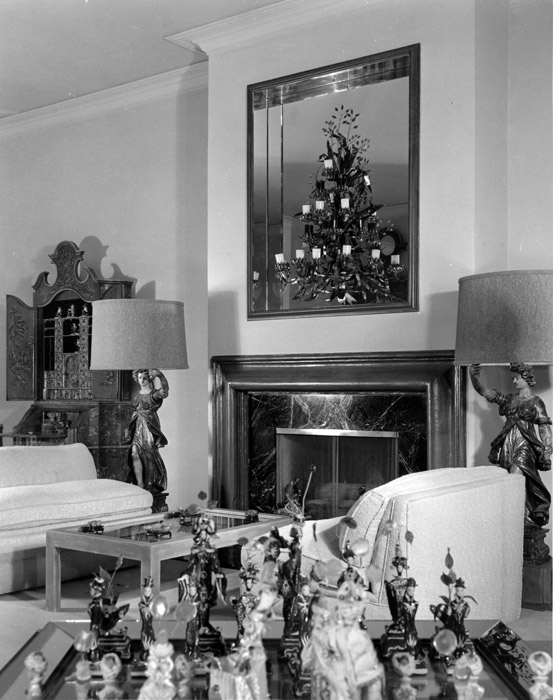 One view of the Getz house, a Hollywood interior by Tony Duquette. Image courtesy of Hutton Wilkinson, Tony Duqette Inc.

Duquette’s singular style – lavish, exotic, ornamental – embraced a huge palette of periods and influences. He was a pioneer in recycling and reusing objects, but his well-known facility with makeshift materials shouldn’t be misconstrued: Duquette was an astute and devoted collector of 17th-, 18th- and 19th-century European furniture, and fine art and objects from around the globe, who also happened not to have been above using, say, a plastic plant spray-painted gold as a centerpiece. 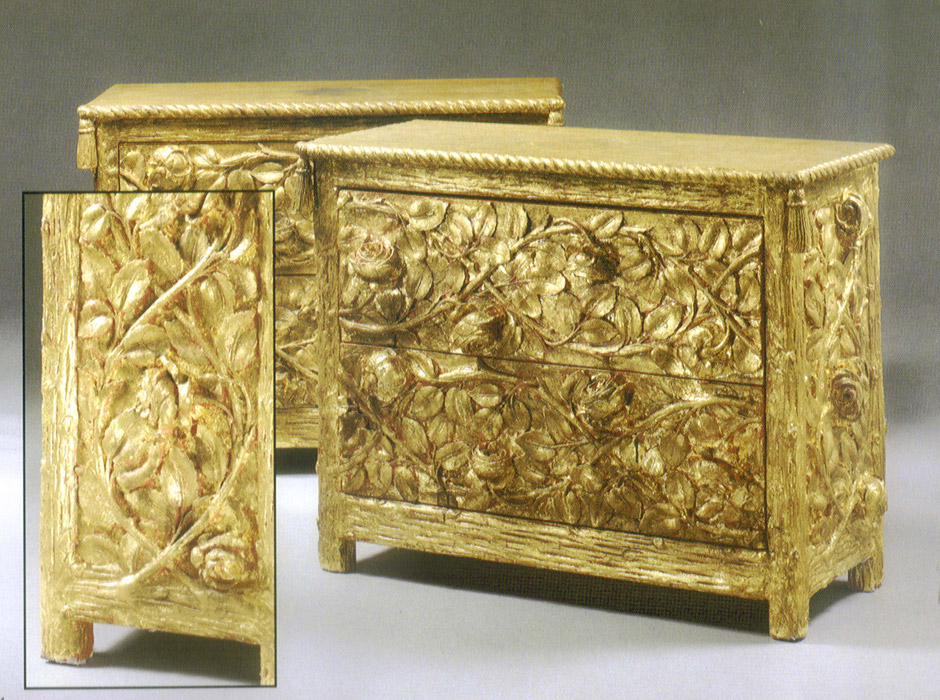 This original Tony Duquette cast-resin rose chest from the 1940s is sometimes found at auction. He made about 24 pieces of this design in 1980. Image courtesy Hutton Wilkinson, Tony Duquette Inc.

“Elfin, whimsical, imaginative and enchanting are words used to describe Duquette, but he was a hard worker, too.”

Elfin, whimsical, imaginative and enchanting are words used to describe Duquette, but he was a hard worker, too. Born in Los Angeles, he studied, on scholarship, at the Chouinard Institute there. After jobs assisting other designers and a stint at Bulllock’s department store, Duquette set up shop for himself, establishing a flourishing business interrupted only by his World War II Army service. 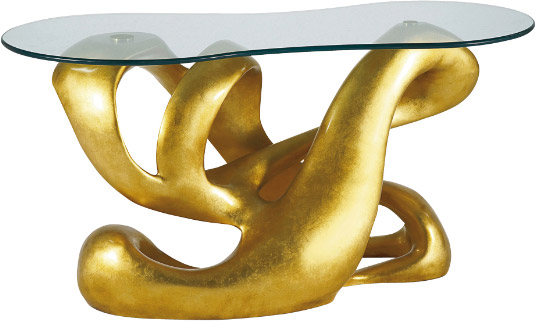 This Biomorphic table was re-released by Baker Furniture along with other Duquette designs. Image courtesy Hutton Wilkinson, Tony Duquette Inc.

Tony Duquette would say he was discovered by the society decorator Elsie de Wolf when he made a black and green lacquered secretary desk for her, and he was also a close friend of film director Vincente Minelli, for whom he designed sets. Other clients, variously commissioning jewelry, objects, furniture and whole interiors included Doris Duke, J. Paul Getty, the Duchess of Windsor, Elizabeth Arden and Norton Simon. According to Hutton Wilkinson, Duquette completed about one interiors project a year, in Los Angeles, San Francisco and throughout the world. The many homes he created for himself and his elegant wife, Beegle, were perhaps the best testament to Tony Duquette’s vision. 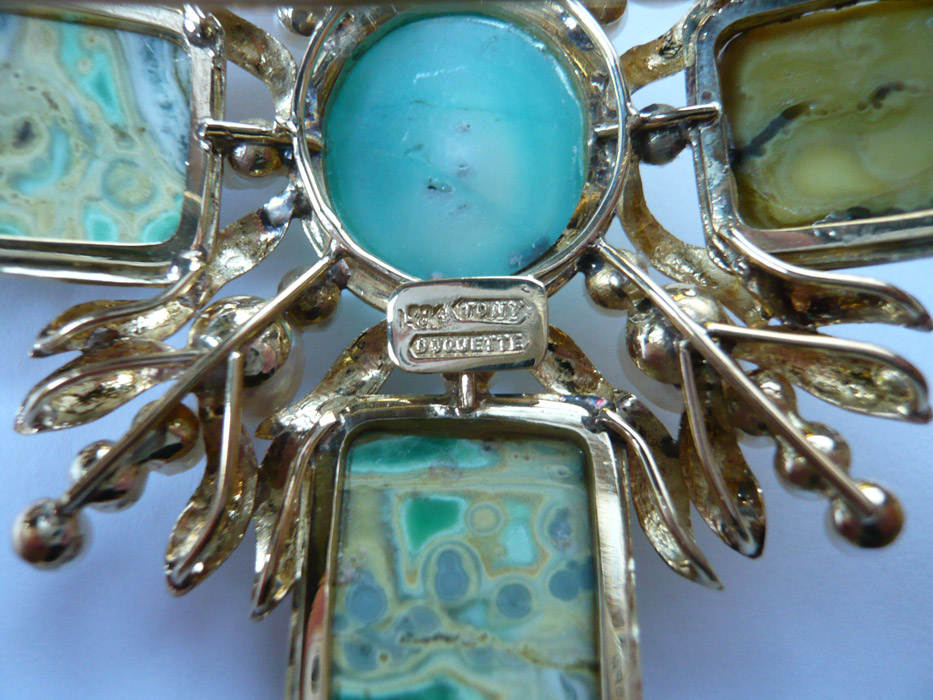 Sadly, Duquette’s masterpiece, Sortiligieum, a sprawling Malibu estate with two dozen thematically diverse small houses, was destroyed in a 1993 fire. “Each house was packed with its own collection of amazing furniture and objects Tony had collected, all lost in the fire. He never recovered from that,” said Wilkinson.

Another of Duquette’s Los Angeles residences, Dawnridge, now serves as headquarters for Tony Duquette Inc. Dawnridge has been renovated by Wilkinson and his wife, Ruth, in the spirit of Duquette’s original design. It is often rented out for special events and photo shoots. 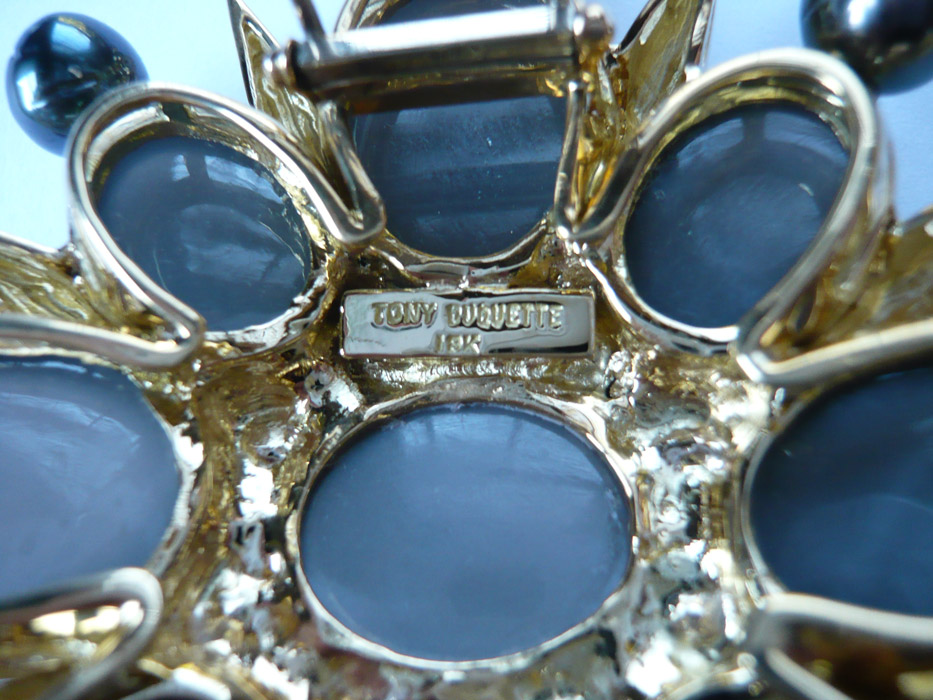 Wilkinson often finds himself in the position of authenticating original Duquette pieces, of which there are very few extant. (For such inquiries, Wilkinson can be reached at huttonwilkinson@hotmail.com.) Furniture, ceramics, lighting and other decorative objects from Duquette’s studio were usually custom-made for specific interiors. A few pieces were made in multiples of 24, by hand, in the studio. These were seldom marked.

Wilkinson has another book about Tony Duquette, More is More (Abrams). Another good reference is Christie’s hard-to-find catalog for the 2000 auction of Tony Duquette’s estate.