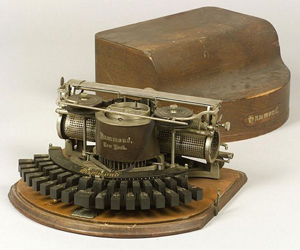 Skinner auctioned this late version Hammond Model I typewriter for $1,645. With patent dates to 1888, the machine has a two-row open keyboard with ebony keys. Image courtesy Skinner Inc. and LiveAuctioneers.com Archive.

MORGANTOWN, W.Va. (AP) – Jett Morton stands among his Olivers, gesturing instructively toward this one or that as he tells their stories.

You nod and peer closely at a few old machines. “So these are the Oliver Standard Visible Writer No. 3?” you say.

An old label is prominently placed on the front of the machine, so you read it aloud: “Oliver Typewriter Company. Chicago, USA. Keep machine cleaned and oiled.”

“Yeah, and this one definitely was not,” Jett says, and you detect just a dollop of indignation.

Surrounded by his Remingtons, his Smith-Coronas and Olympias … his Marxwriter … and his Sperry Rand … and his Oliver Standards and all his Royals, Jett Morton, 13, feels at home among the communication tools of another era.

He’s in his element, actually.

And for the past half hour, he’s been leading visitors on a tour of the shelf-lined room in the basement of his family’s house in South Park, where the young collector displays at last count 91 machines that saw their heyday decades or even a century before he was born.

“I think I was 7 when I started (collecting). I can’t remember exactly. But when I was young, my dad showed me what a typewriter was, and I was fascinated. At the time, I collected electrics (typewriters), but now, I don’t even bother with them.”

Jett’s dad, Dennis, listening to his son’s spiel, shakes his head and grins.

Clack, clack, ding! Jett’s clunky old black typewriters rest on shelves along with newer model white ones and delicate pale blue ones. He has toy typewriters and dial typewriters. Standard and wide-carriage typewriters.

Typewriter cases are stacked in a corner and other cases fill an entire closet. Typewriter manuals and typewriter cleaning kits are displayed. “And, oh yeah, this is 20th Century Typewriting, Fairmont High School, 1942, Southwest Publishing Co.,” he says, carefully holding an aging text.

Where, oh where, did he get all this stuff?

Well, these days he and Dennis have added antique malls and estate sales to their shopping trips, says Jett. But in the beginning, they found bargains among the castoffs people offered in rummage booths and garages.

“My dad and I, we used to go to yard sales and flea markets, we still do, and eventually we got a couple typewriters just to compare, and that’s how I got started, actually,” Jett explained.

“Do you know Herman Price, CPA? He’s a collector. I’m actually going to his house tomorrow because he’s having two typewriter collectors from Europe come over.

“I’ve been to a meeting of other typewriter collectors. ETCetera is a magazine that everyone is involved with. There’s one issue where I was in it on the back (cover). Let’s see …” He rifles through a cabinet. “I don’t think I have it displayed …

Among the other photographs on the last page of the publication is one of Jett and Dennis. Collector Jett Morton and Dad, Dennis, amid the Blicks.

“It’s a type of typewriter (Blickensderfer). The meeting was at Herman Price’s house, actually. He has hundreds of typewriters.”

Later, a call was made to Price to discuss the event and he claims he’s innocent.

“I keep telling Jett and his dad that I didn’t start him,” says Price, a Morgantown accountant and typewriter collector for more than 15 years. “I was moving my office. I was having a little sale. And he and his dad came by.

“He already had five or six typewriters. Most of my collection was in my office, so I showed him several hundred typewriters. “And I gave him one that was truly an antique.”

(For the record, Price says he’s also innocent about starting his own sophisticated collection. “About 15 years ago, I saw a typewriter at an antique shop. I thought it was really, really interesting, but I didn’t buy it. Then my wife bought it and gave it to me for Christmas. So this is her fault.”)

So then you ask the man: Is Jett a true collector?

Oh, indeed, he declares. The boy has contracted “the acquisition bug” and has “a really nice collection.”

Price says Jett was there for the meeting with the two European collectors who were actually on their way to pick up a typewriter in Delaware and simply came to Morgantown for a visit.

He says most kids Jett’s age wouldn’t know what a typewriter was. “They’d want to know where the monitor is. Where’s the power switch?”

And then there’s ETCetera, the Journal of the Early Typewriter Collectors’ Association, where Jett’s picture ran.

“People around the world will be seeing the newsletter and reading about the 13-year-old boy who collects typewriters,” Price says.

He also says the boy will have a poem published in the upcoming issue. Hey, you realize. You’ve seen that poem. It’s tacked up on a wall in Jett’s typewriter room at the Morton house.

It reads: “In the back of a shop Filled with antiques Rests an old typewriter That nobody seeks. Dingy and broken, Out of repair The typewriter waits In quiet despair. When the right buyer Walks inside, The dusty machine Is filled up with pride. The typewriter waits as The buyer haggles the price Soon it will be In typewriter Paradise.”

If you ask her, Jett’s mother, Sue Morton, will tell you that it could be his older brother, Atticus, who initiated the avocation with his penchant for accumulating video games. Once Atticus grew up and moved away, Jett inherited his games and started adding to them.

But Herman Price says it’s hard to explain why collectors collect what they collect. It’s sort of an individual thing.

At 13, theories don’t seem to matter to Jett. There’s a computer in the house if he needs one, but for now he’s in love with all things typewriter. He says he’s making more shelves for his typewriter room in his eighth-grade woodshop class at South Middle School.

So what kind of career do you want someday? you ask the boy who writes poetry about an obsolete method of communication.

Actually, he says, when the time finally comes, he’ll journey back to the future.

“I’ll do something in electronics, I think.”

So weit, So gut, trotz Krise

Hayter’s ‘Blues’ expected to be a top hit at Susanin’s...
Scroll to top