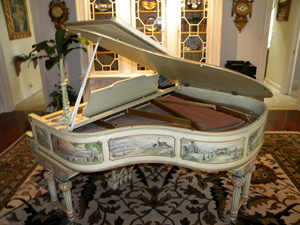 KNOXVILLE, Tenn. (PRWEB) – A vintage instrument often occupies a special place in a person’s heart and mind, whether it is the heirloom piano from a grandparent’s home or an old piano from church. As such, many people find themselves coming into possession of these antiques as they get passed down or handed off.

Michael Stinnett, owner of the Antique Piano Shop in Tennessee, says the most common question he receives through his website is, “What is this piece worth?”

“The best way to determine the value of your old piano is to get it appraised by a professional,” he said. “However, there are a few things an owner can look for that can give a sense of whether the piano is valuable or not.”

Stinnett offers these five tips to determine the potential value of an antique piano.

1. Age – Piano age is different from car age. A car becomes an antique when it’s 25 years old. However, most 50-year-old pianos are considered modern. In order for a piano to be considered antique, it needs to be closer to 100 years old, and age alone does not make it valuable. The Antique Piano Shop generally deals in instruments built before the Great Depression, although there are some rare pieces built during the World War II years that are considered historically important.

2. Unique qualities – Does the piano have any ornate or custom woodworking? Does it have an interesting or unusual design? Is it made with an uncommon wood or other material? Was it previously owned by or made for a celebrity? An answer of “yes” to any of these questions may mean that particular piano is more valuable than its counterparts.

In the 19th and early 20th centuries, pianos were generally offered in different grade levels. For example, a manufacturer would offer “Good,” “Medium” and “Best” grades. The “Good” grades were usually the basic and simple models, often with only two pedals instead of the more popular three pedals, and were usually sold at a more affordable price for the average consumer. The “Medium” grades, which were sold in the largest quantities, were usually a bit more elaborate, larger and offered additional features such as three pedals instead of two pedals. The “Best” grades were extremely elaborate, and would have cost as much as a small house at the time.

3. Brand name – In general, particularly when dealing with pianos made in the 20th century, pianos that cost more when they were originally purchased are worth more today. In theory, brand names with a lot of name recognition like Steinway, Mason & Hamlin, Knabe and Chickering, could potentially have more value than lesser-known brands. In the real market, however, Stinnett says he is seeing lesser-known brand names, often of superior quality, selling for as much or more than pianos from more well-known manufacturers because they are perceived as more rare.

4. Condition – This one comes with a caveat. While a piano that needs a lot of work may not have much “as is” value, it could be worth much more after restoration. However, when determining that value of the piano as it currently sits, condition certainly comes into play. Is the finish coming off? Are the pedals functional? What do the hammers and strings look like on the inside? The answers to these questions can determine how much a piano can sell for right now. Before selling, an owner might want to consider having a professional restore an antique piano, as restoration can significantly increase the value of the instrument.

5. Level of restoration – Similar to condition, the level of restoration can go toward determining the value of a piano. Many people often mistake a piano as being “restored” when in fact only a few cosmetic improvements were made. Since most people don’t know what to look for, especially on the inside, they might be surprised to learn that their piano wasn’t restored at all, but just refinished or painted, which is a far cry from complete restoration. This can mean the piano isn’t worth as much as the owner might have thought. 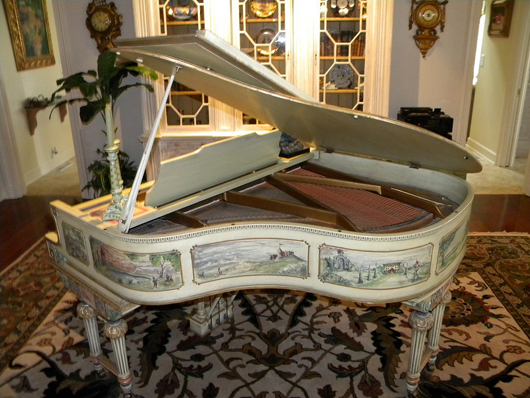