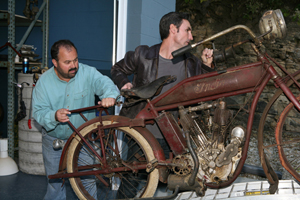 NEW YORK – Mike Wolfe and Frank Fritz are back for a second season, with new adventures taped during scavenging trips through backroads, junkyards, and filled-to-the-brim barns across America for “rusty gold.” With an average of 3.8 million total viewers per episode in its first season, American Pickers was the No. 1 new cable series of 2010. Season two begins on Monday, June 7 at 9 p.m. Eastern Time on HISTORY™ Channel.

Part sleuths, part antiques experts, and part cultural historians, Wolfe and Fritz visit small towns from coast to coast in search of weird and wonderful Americana. Each treasure hunt leads them to fascinating, quirky characters – everyday people with stories that open a window onto American life.

As professional “pickers,” these childhood buddies comb through memorabilia and artifacts, hoping to find treasures among the trash. Sometimes they make a few bucks; sometimes they walk away with little more than the history of an item.

The new season begins in North Carolina, where the Pickers comb through a collector’s abandoned outbuildings and find a 1950 Studebaker. Mike becomes obsessed with a 1934 pre-Airstream trailer, but can they negotiate a deal? Then, hoping to sell a choice vintage sign, they visit their friend and NASCAR champion Ryan Newman, who has a surprise of his own for the guys.

As their junkyard journeys continue, the Wolfe and Fritz rummage through ramshackle school buses, a burned storage building, forgotten barns, salvage yards, and rust heaps in search of what they call “good junk.” They come across an item they’ve never seen before, place bets on what it actually is, and get a surprising assessment from the appraiser. They encounter a mother and daughter who catch the picking bug and give the guys a run for their money. And with nerves of steel, they try to strike deals with people who are often reluctant to part with their possessions.

Meanwhile, back at the Pickers’ headquarters in Iowa, Danielle Colby Cushman holds down the fort at Wolfe’s storefront, Antique Archaeology. She spends her time chasing leads, talking to sellers and doing research via trade publications and Web sites. Cushman also keeps the boys in line – while they keep her in stitches with their antics.

“We’re caretakers of treasures and the stories behind them,” said Wolfe. Traveling along with the duo vicariously, viewers can expect to meet an assortment of American originals and watch as a patchwork of history unfolds – one treasure at a time.

American Pickers is produced for HISTORY by Cineflix Productions.

Meet the stars of American Pickers:

A lifelong “picker,” Wolfe has been combing through junk since the age of four. Over the years, he’s earned a reputation as one of the country’s foremost foragers, traveling coast to coast in search of forgotten treasures. Where other people see dilapidated barns and overgrown yards, Wolfe sees potential goldmines packed with rare finds and sensational stories.

Wolfe spends as much time as he can on the road, usually with Frank – his friend of 20 years and constant picking partner. What exactly does he look for? “Anything I can make a buck on,” he said with a laugh. That could be anything from antique baby carriages and vintage jukeboxes to old cars and scrap metal. Wolfe’s clients include interior designers, art directors, photographers and collectors – and he owns Antique Archaeology, a specialty shop that sells antiques, vintage items and more in sleepy Le Claire, Iowa. Visit Mike’s official company website here: www.antiquearcheology.com

Like his childhood friend Mike Wolfe, Frank Fritz started picking early, collecting rocks and beer cans as a kid. He worked for many years as a fire and safety inspector but always had a passion for antiques, junk and anything with an engine. These days, he spends most of his time on the road with Mike, digging for treasure in barns, garages and junkyards across America.

Even-tempered and affable, he has a way with potential sellers and a knack for putting out fires: Wolfe calls him the bearded charmer. Fritz does get a little carried away, however, by anything with an engine, and Wolfe often has to talk him out of buying yet another motorbike for his collection.

With their complementary personalities and shared love of picking, Wolfe and Fritz make the perfect team. Still, since they’re both out to cash in on their finds, some healthy competition always comes into play. Visit Frank’s official company website here: www.frankfritzfinds.com

While the guys are out picking, Cushman holds down the fort at Antique Archaeology. Wolfe says she’s the glue that holds them all together. A mother of three, Danielle is always working on a new creative project, whether it’s painting, designing clothes or selling vintage-inspired gifts online. She says she’s extremely proud of the “boys” and fortunate to work with such a talented pair.