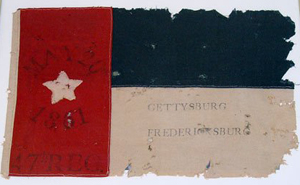 ALBANY, N.Y. (AP) – They made it through Shiloh, Antietam and Gettysburg, but many of the Civil War battle flags sitting in the nation’s state-owned collections might not survive the budget battles being waged in some statehouses.

Preservation work on deteriorating banners carried in some of the war’s bloodiest battles has been eliminated, scaled back or ignored by state budget planners focused on finding money for basics such as education, health care and transportation.

In New York, home to the nation’s largest state-owned collection of Civil War battle flags, money for a preservation project is being cut from Gov. David Paterson’s proposed budget. Indiana’s funding for flag conservation has been returned to the state’s general fund. Ohio hasn’t provided government funding for its 400-plus Civil War battles flags in nearly a decade.

Another recent budget casualty is Pennsylvania’s allocation for maintaining the battle flag collection it preserved in the 1980s.

“Thank goodness we did it back then,” Ruthann Hubbert-Kemper, executive director of the Pennsylvania Capitol Preservation Committee, said of the project that conserved all of the Keystone State’s nearly 400 Civil War battle flags.

The lack of funding for flag preservation could hurt efforts to promote the 150th anniversary of the Civil War.

Battle flags are commonly used in Civil War exhibits, but usually only after lengthy preservation work that can cost tens of thousands of dollars, depending on a banner’s size and condition. Staging publicity-generating events using the flags may be more difficult in the run-up to the Civil War sesquicentennial in 2011, advocates say.

“This isn’t the time to be cutting this. It’s the time to be increasing it because it will be bring in tourism dollars,” said Ed Norris of Lancaster, Mass., head of the battle flag preservation committee for the Sons of Union Veterans of the Civil War.

The total number of battle flags in state-owned collections isn’t clear, but it’s likely several thousand, only a fraction of which have been preserved. Some have deteriorated into mere fragments and fringe, victims of neglect or exposure to light, heat and humidity.

“Time,” Hubbert-Kemper said, “is the enemy.”

New York began its battle flag preservation project a decade ago, with the Office of Parks, Recreation and Historic Preservation in charge of conserving nearly 2,000 banners.

Conflicts from the War of 1812 to the wars in Iraq and Afghanistan are represented, but the bulk – more than 800 – are Civil War flags.

With New York facing a budget deficit in the billions of dollars, the state is dropping its $100,000 annual funding for flag preservation, said parks agency spokesman Dan Keefe.

The project has focused on preserving the collection’s Civil War flags – many of them made of silk – because they represent the collections oldest and most fragile banners, said Christopher Morton, assistant curator at the State Military Museum in Saratoga Springs, where many of New York’s flags are stored.

Civil War buffs and historians consider battle flags, especially those damaged by shot and shell, to be among the most compelling artifacts to survive the war. Flags were used to mark a regiment’s location on the battlefield, and flag bearers made prominent targets. Some of the banners are stained with blood.

“There are many flags that were carried in battle heroically by soldiers who died in doing so,” Morton said.

In the South, several states rely on donations from re-enactment groups and descendants of Confederate soldiers to fund flag preservation.

The Museum of the Confederacy in Richmond, Va., is home to the largest Civil War battle flag collection in the South with more than 500 banners. John Coski, a historian at the museum, called flag preservation “a universal problem.”

Edward McNatt Butler, former commander of the Tennessee division of the Sons of Confederate Veterans, called the battle-scarred banners “flags of honor.” The group has raised money to help the Tennessee State Museum in Nashville preserve six of its more than 60 Civil War flags, museum officials said.