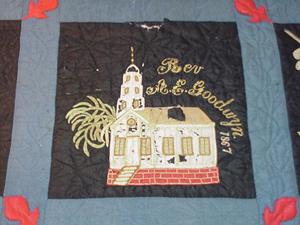 One square depicts the original church, the Rev. Goodwyn’s name and the date 1867. Image courtesy of Jessica Hack Textile Restoration.

NEW IBERIA, La. (AP) – The 144-year-old quilt, embroidered and appliqued in 1867, was the only piece of church history left after the first First United Methodist Church burned down more than a century ago. The church was long since rebuilt, but the congregation didn’t even know the quilt still existed until 2004.

The 8-by-9-foot quilt, which found its way back to the church after unknown years in attics and closets, depicts more than just the talent and artistic creativity of the quilters in the late 1860s. It tells a tale of its own, reminding members of the city’s first Methodist church services held in 1823, an organized Methodist church and Sunday school established in 1839 and the Methodists’ first permanent New Iberia church, established in 1860.

“We knew immediately we had to start raising funds to preserve part of our historic past,” said Norma Lester, a member of the of the Women’s Ministry of First United Methodist Church.

Members of The Helping Hand Link, part of the women’s ministry, knew if they were to preserve such an important part of their church’s history, they had to do it immediately. With that in mind, the restoration and preservation of a silk quilt handcrafted by the women of the congregation in 1867 quickly became their top priority.

The cost of $11,700 for restoration and preservation—and another $4,000 to be able to display it—is well worth it for such a historic piece, members say. They view the project as a way to preserve the history of not only the church, but also the community in fabric.

Each of the 49 squares is worked in colorful appliqué and embroidered with different patterns, including each quilter’s family surname. Some of these surnames represent ancestors of not only present members, but also their friends and family. Pharr, Riggs, Reynolds, Dorsey, Blanchet, Stein, Steen, French and many other names of current New Iberia residents are embroidered on the quilt. One of the squares includes the name of the Rev. A.E. Goodwyn, pastor of the church from 1868-1873.

Just as colorful as the quilt is its history and the church it represents.

According to members of the congregation, their first permanent church in New Iberia, First Methodist Episcopal Church, South, was located on the corner of Iberia and Washington streets.

“The Methodist Conference Report described it as the grandest and most beautiful structure in South Louisiana. It was constructed of timber, ‘felled and hewn by members’ own hands,” said Lester.

The church was dedicated in 1860 and the 23rd session of the Louisiana Annual Conference met at the church in 1868.

In 1890, Lester said, the church, the parsonage and all contents burned. But, somehow, the silk quilt completed in 1867 survived.

Inita Segura, a member of the ministry, said the quilt was stored in a pillowcase for decades. As the member keeping it died, it was handed down to another church member until it finally reached the hands of the late Amelia Laughlin, a local principal, and then to Jessie Lee Lusk de la Houssaye. After she died, her daughter, Jessie D. Abadie, with approval from her family, offered it back to the church in 2004.

“We did not know the quilt even existed until the family came forward. It is extremely important to us to restore this quilt. After the fire of the church, this was the only piece of history left,” said Segura. “It is up to us to preserve it. We feel responsible for it.”

May Kneupper, a member of the ministry and a retired certified quilt instructor, described the church’s treasured possession as one of pure beauty.

“It is the most beautiful quilt I have ever seen. The handwork is amazing with a combination of patch work, embroidery, appliqué and embroidered writing in Old English,” she said.

Kneupper said one square in the center of the quilt reads “Mary A. Riggs, by her friends.”

“It seems the quilt was made and dedicated to her as a memorial, but we are not sure,” she said.

Church members are still looking for family history to connect to other names on the quilt such as Elps, A. Moon, T. Roane, Norwood, W. Williams and others.

While the answers to many of the questions will never be known, members of the women’s ministry say they are honored to have been presented with this special quilt.

Their fundraisers for its restoration included raffling a hand-tied quilt made of vintage fabric.

The historic quilt was turned over to Jessica Hack, a textile conservator in New Orleans, to stabilize and preserve its original beauty. As October ended, she said the work was about three weeks ahead of schedule.

Hack, known for her restoration work in antique textiles ranging from the 17th to the 20th century, described the heirloom as one of rare quality.

“You seldom see this much uniqueness of design and beauty in a quilt. Judging by the detail of their work, these were skilled needlewomen, not amateurs,” said Hack. “In addition to the excellent embroidery work, the quilting stitches are subtle, sewn with elaborate designs.”

Some squares on the quilt feature images of a lion, cheetah, polar bear, flowers, trees, a picture of the Methodist Church building, arbor and a purple and white striped tiger. Each quilter embroidered her family name on her square.

“It is just beautifully rendered. The textural work, appliqué and padded embroidery and the variety of designs are amazing. It is artistically, as well as historically of great value to the church,” said Hack.

Hack said the quilt was restored in two different phases. In the first phase, crepeline silk fabric was used to overlay and stabilize the shattering silk fabric. The fabric was dyed and coated with a heat sealing adhesive and fitted to each of the 49 squares. Once that labor-intensive project was completed, the quilt would be stored in an acid-free box.

Church members are hoping to raise an additional $4,050 for the second phase, allowing the quilt to be permanently displayed upright, on a stretcher mount.

“This is a determined group of ladies who have worked hard to make sure this silk heirloom would not just sit in a closet and rot away. This is an heirloom that is worth preserving,” said Hack. 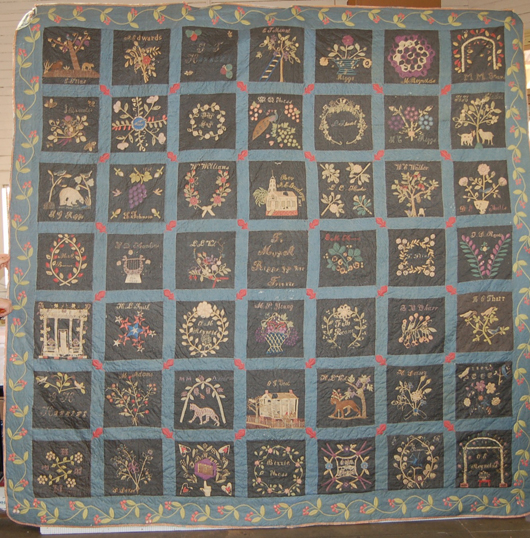 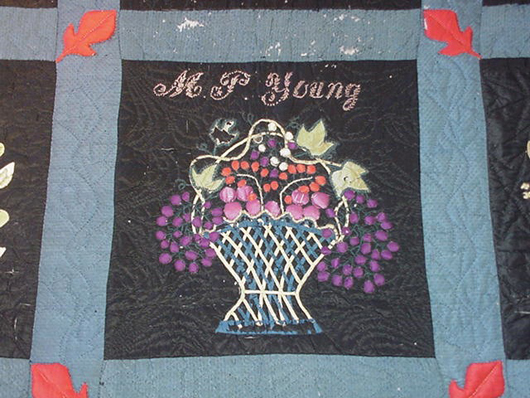 M.P. Young is represented by a basket of fruit. Image courtesy of Jessica Hack Textile Restoration. 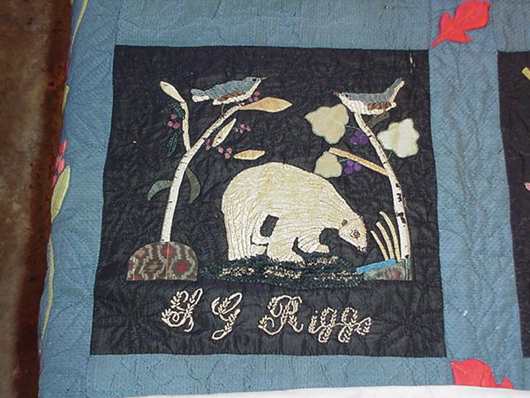 Songbirds and a white bear are pictured on one of the quilt squares. Image courtesy of Jessica Hack Textile Restoration. 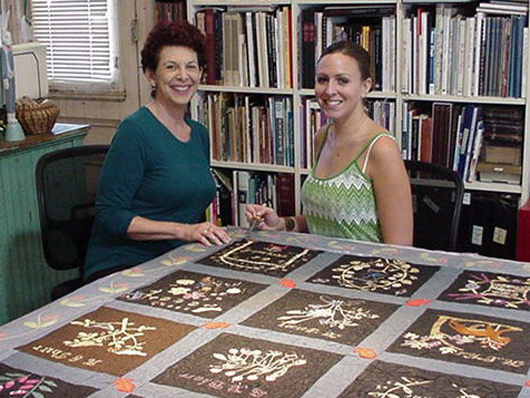