NEW YORK – A collection of 100 pieces of archaic Chinese bronzes on-loan from the Sai Yang Tang Collection of Kwong Lum is on exhibition now through Saturday, March 14, at Gianguan Auctions Art Gallery at 295 Madison Ave. (entrance on East 41st Street) in Manhattan. It will conclude on Saturday at 2 p.m. followed immediately with a lecture hosted by China Institute at Gianguan Auctions gallery.

Presenter Kwong Lum, Chinese scholar, artist and owner of the Sai Yang Tang collection, will explore the fascinating history of the bronzes. Among the ancient objects are archaic swords decorated with jade, silver and gold, spears, tools, ritual wine vessels of all sizes and forms, food-storage containers, and a massive 6-foot-tall statue of a man on horseback holding a spear.

Several of the works – human figures kneeling and wearing large ear loops – were created as early as the Qija period (2400 B.C.–900 B.C.) that predates the Shang Dynasty (16th–11th century B.C.), generally accepted as the start of the Bronze Age in China. The most recent items were produced during the Han Dynasty (206-220 A.D.).

The talk will cover subjects such as purpose, symbolism and the locations at which the objects were discovered. New scholarship on the evolution of civilization during China’s Great Bronze Age will be included.

Lum, a scholar, artist and businessman, began collecting ancient Chinese artwork as a 9-year-old in Hong Kong. At that time he was studying under the guidance of art teacher Ding Yanyong, who taught him about Chinese painting, calligraphy and most of all, the appraisal and collection of Chinese antiques. Thus began his Sai Yang Tang Collection.

Over the decades, Lum has immensely enlarged the volume of his collection by adding in ancient masters painting and calligraphy, bronzes, sculpture and porcelain ware of different dynasties, purchased throughout the world at auctions or from private collectors. Today, his Sai Yang Tang Collection in the United States, boasts invaluable art treasures of ancient China.

In 1999, a Kwong Lum National Art Treasure Exhibition was held by Asian Cultural Center in New York, commemorating the 50th anniversary on the formation of the Sai Yang Tang Collection.

China’s CCTV National Treasure Archives program has made a special trip to New York to interview Lum and they documented four television episodes in the CCTV broadcast.

In 2012, the Guangdong Government built a museum named Kwong Lum Art Museum at Jiangmen City. The museum opened in 2014 and houses Lum’s paintings and treasures of the Sai Yang Tang’s Collection.

The exhibition and the bi-lingual lecture are free to the general public. 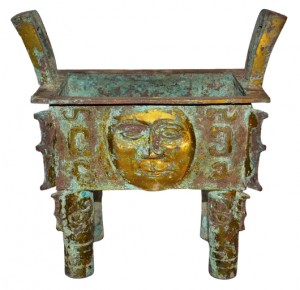