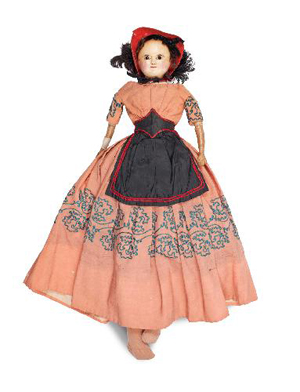 Known as ‘Nina,’ this doll used for smuggling quinine to Confederate troops during the Civil War will be featured on PBS Television’s History Detectives. It belongs to the Museum of the Confederacy in Richmond, Va. Image courtesy of the museum.

RICHMOND, Va. – Her name is “Nina” and she lives at the Museum of the Confederacy in Richmond, Virginia. She is a redhead and wears red shoes; her white dress has silk thread embroidery on the skirt. Nina is a doll that was donated to the museum by the surviving son and daughter of Confederate Maj. Gen. James Patton Anderson. They reported that during the Civil War, quinine for the sick soldiers was hidden inside the doll’s head and smuggled through the Union blockade.

Nina is one of two such dolls owned by the museum. Both were X-rayed at the Virginia Commonwealth University School of Medicine in October, 2010. The results showed that each of the dolls was capable of holding a respectable amount of quinine powder.

A story about the dolls written by Associated Press reporter Steve Szkotak caught the eye of researchers from the popular PBS series History Detectives and they took the story further by having the dolls examined at a forensics laboratory. The results of the tests will be revealed for the first time during an episode of History Detectives, airing on Tuesday, Aug. 30, 2011, at 8 p.m. Eastern Time/7 p.m. Central Time. Check your local listings for the channel and time in your area.

The Museum of the Confederacy is a private, nonprofit educational institution located at 1201 E. Clay St. in downtown Richmond’s historic Court End neighborhood. Free parking is available in the MCV/VCU Hospitals Visitor/Patient parking deck adjacent to the Museum.

White House of the Confederacy now open year round