LONDON (AP) – Waterford Wedgwood PLC, the maker of classic china and crystal, filed for bankruptcy protection on Monday after attempts to restructure the struggling business or find a buyer failed.

Four administrators from business advisory firm Deloitte were appointed to run the company’s businesses in Britain and Northern Ireland, while a Deloitte partner in the Irish Republic was appointed as receiver of Waterford Wedgwood PLC, the ultimate parent of the U.K. companies, and other Irish subsidiaries.

The U.K. joint administrators said they intended to continue to run the business as they seek a buyer. Trading in the company’s shares was suspended on the Irish Stock Exchange where they languished at just one-tenth of a euro cent and the company’s directors – including Anthony O’Reilly, the Irish publishing magnate who along with his brother-in-law Peter Goulandris owns more than half of all Waterford Wedgwood shares – handed in their resignations.

“Waterford, Wedgwood and Royal Doulton are quintessentially classic brands that represent a high quality product which is steeped in history,” the administrators said in a statement. “The administration team will be working closely with management, customers and suppliers during this time to ensure operations continue whilst a sale of the business is sought.”

Waterford Wedgwood, which employs around 7,700 worldwide, is the latest in a burgeoning list of iconic British companies to succumb to the global economic slowdown and credit squeeze. Department store veteran Woolworths, the queen’s tailor Hardy Amies, tea and coffee merchant Whittard of Chelsea and fellow ceramics stalwart Royal Worcester and Spode have all filed for bankruptcy protection in recent months.

Wedgwood has been an iconic name in British pottery for 250 years, after its founder Josiah Wedgwood opened the first factory in Stoke-on-Trent, central England, in 1759. It began making bone china in the 19th century.

Waterford Crystal traces its lineage to a factory opened in Waterford, southeast Ireland in 1783, although that business failed in the 1850s. The brand was revived by Czech immigrant Miroslav Havel in 1947.

Under O’Reilly’s watch, Waterford acquired Wedgwood in 1986 to form the present company, listing on the stock exchange and expanding overseas in the 1990s before buying fellow Stoke-on-Trent ceramics maker Royal Doulton in 2005. 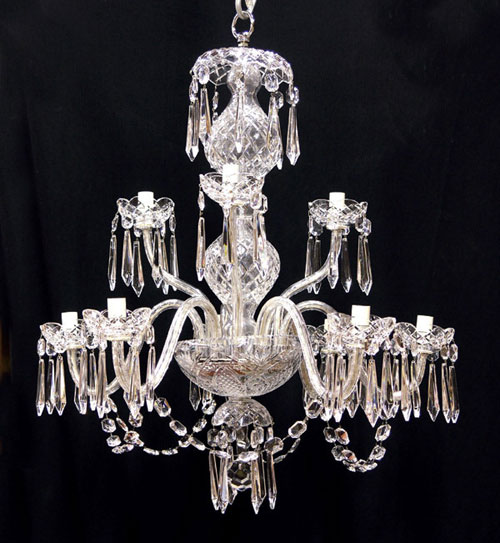 Much of the business has now shifted offshore, where it employs 5,800 people, including 1,500 people at a plant in Jakarta, Indonesia, which produces most of the company’s ceramics. The majority of its crystal production has been handed to Eastern European subcontractors.

The company employs a work force just a third of that size at 1,900 in Britain, including around 600 in Stoke-on-Trent and 800 in Waterford.

Waterford Mayor Jack Walsh said the closure of the crystal factory would deal a cultural and psychological blow to all of Ireland, noting that the crystal plant was one of the country’s top tourist attractions and the product “one of only a handful of iconic Irish brands.’

“Given this, it is of major strategic importance that this company not be allowed to slip into oblivion,” Walsh said.

In Stoke on Trent, Margaret Kilford was close to tears as she described how important Waterford Wedgwood was to the town.

“It’s part of Staffordshire. It’s a very sad day,” she said. “I’ve always bought Wedgwood. Nothing else will do. If it goes, that’s it.”

The Deloitte administrators said the company has “benefited from significant shareholder support” in recent years as the management team tried to restructure the business. O’Reilly and Goulandris have pumped more than 400 million pounds of their own money into the business since 2002.

“However, as trading conditions deteriorated, it became apparent that a restructuring of the businesses could not be achieved in an acceptable timescale,” they said in a statement.

A subsequent alternative strategy to find a buyer also failed, they added.

Waterford Wedgwood chief executive officer David Sculley said he was “disappointed” about the bankruptcy filing, but remained confident a buyer could be found.

Under the administration process, administrators are appointed to salvage as much of the company as possible for the benefit of its creditors. While they may do so by selling the company as a going concern, they can revert to a break-up to recoup as much money as possible from assets if a buyer for the whole business cannot be found.

The receivership process in Ireland follows a similar path.

Waterford Wedgwood announced last month that it had been forced to ask its chief creditors for “forbearance” because the company could no longer pay its loans on time or in full. It also revealed falling sales and increasing first-half losses, and said its survival depended on securing new investment.