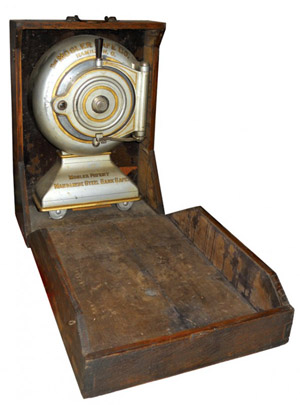 Rich Penn Auctions of Waterloo, Iowa, sold a salesman’s sample of a Masler Safe Co. Cannonball safe in May for $35,000. It came with a velvet-lined oak carrying case. Image courtesy of LiveAuctioneers Archive and Rich Penn Auctions.

FRISCO, Texas (AP) – In a Frisco museum, there sits a mystery made of steel.

This 3,700-pound Mosler cannonball safe once held the riches of a railroad town. Today, the bronze-colored behemoth sits frozen shut because of a design guaranteed to thwart bank robbers at the turn of the 20th century.

Its possible contents likely have captured imaginations among the hundreds of schoolchildren who each year tour the Frisco Heritage Museum. Frisco Public Library director Shelley Holley, who oversees the museum, is curious too.

She said the city has talked to a handful of experts. But their safecracking solutions call for breaching the hull of manganese steel. The antique safe – with its ornate lettering and original finish – is too valuable for that, she said.

“Our job is finding someone who has enough experience and won’t damage it in the process,” Holley said. “Locksmiths who are willing to try are a dime a dozen, but they all want to drill out the back.”

The census listed Frisco’s population as 332 in 1910, the year the Mosler cannonball likely arrived by rail in a community of cotton farmers. It’s anyone’s guess how it was hauled several blocks uphill along a dirt road to Frisco Guaranty State Bank.

But it was surely an event for the bank, which opened with one employee that September, along Main Street between the railroad tracks and the cattle trail to the east.

“If you spent the money to have a cannonball safe, you wanted to display it,” Holley said. “You wanted everyone to know that you had one, so that people weren’t constantly kidnapping your bank president.”

That was the way bank robbers worked back then: Kidnap the president, force him to open the safe at gunpoint late at night when no one was around, and then ride out of town before anyone was the wiser.

The Mosler safe put a stop to that, with a triple time-lock mechanism behind its combination lock. It could be opened only after a set amount of time passed on its internal clocks, among the finest timepieces of the day.

When the Frisco bank closed its doors in 1928, the town went without a bank for nearly two decades. Tenants came and went at the building at Fourth and Main. Then in 1947, First State Bank opened there, with Jack Scott Jr.’s father as the cashier. The Mosler safe, which sat inside the vault, became part of the daily operations.

Scott, who started working at the bank in 1964 at age 21 and later became its president, said the safe was used to store cash, savings bonds and loan collateral. A separate compartment inside was secured with another combination lock. Scott said that’s where the bank kept the $500 and $1,000 bills.

When the bank moved to a new location, Scott said, he never considered moving the Mosler. It had simply outlived its usefulness.

Ownership of the safe went to the city of Frisco in 1977, when it bought the old bank building for its City Hall. Jan Alexander, who was Frisco’s tax assessor and collector at the time, said the city stored records and its postage meter in the vault but left the cannonball safe untouched.

“I don’t think we ever opened it,” she said. “It probably just died of old age.”

But the Mosler gained new fans after it was moved in 2008 to the Frisco Heritage Museum.

“We thought the only thing that was stopping us from getting it open was finding someone with the combination,” Holley said.

Scott still remembered the code – a single number. “I must have opened that safe a couple thousand times,” the retired Frisco banker said.

While he was able to get through the first door, the second, with that time-lock mechanism, didn’t budge.

Holley said the city has considered putting out a call to experts and holding a safecracking party. Maybe make it a fundraiser.

“We would love to find someone who feels like they really do have the skill set and would be willing to perform under pressure with cameras and people watching, so we could all discover together what’s in there,” Holley said.

But what if there’s nothing in there?

Images come to mind of Geraldo Rivera’s much-hyped opening of Al Capone’s vault on live television in 1986, Holley said. The TV newsman had a medical examiner and IRS agents on hand to catalog any contents the famed gangster may have hidden away. Millions watched as crews blasted through walls to find only a few empty bottles.

Holley wonders about the Mosler:

“Is the romance of not knowing what’s in it more powerful?” 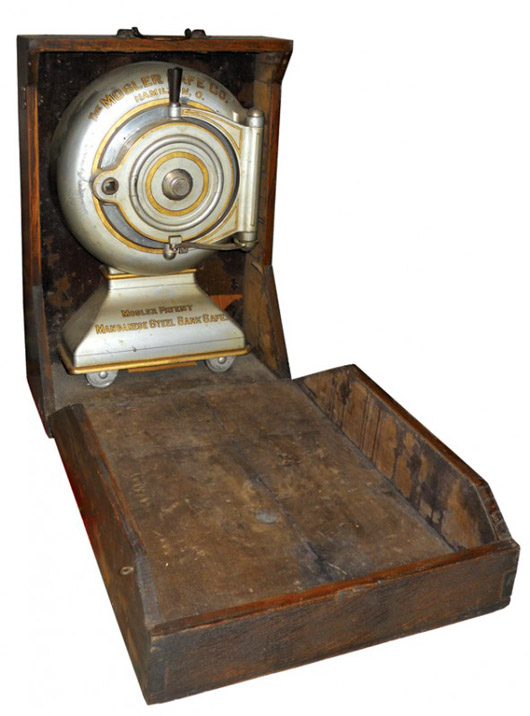 Rich Penn Auctions of Waterloo, Iowa, sold a salesman’s sample of a Masler Safe Co. Cannonball safe in May for $35,000. It came with a velvet-lined oak carrying case. Image courtesy of LiveAuctioneers Archive and Rich Penn Auctions.

Book Review: Why stealing a Rembrandt seldom pays off
Scroll to top