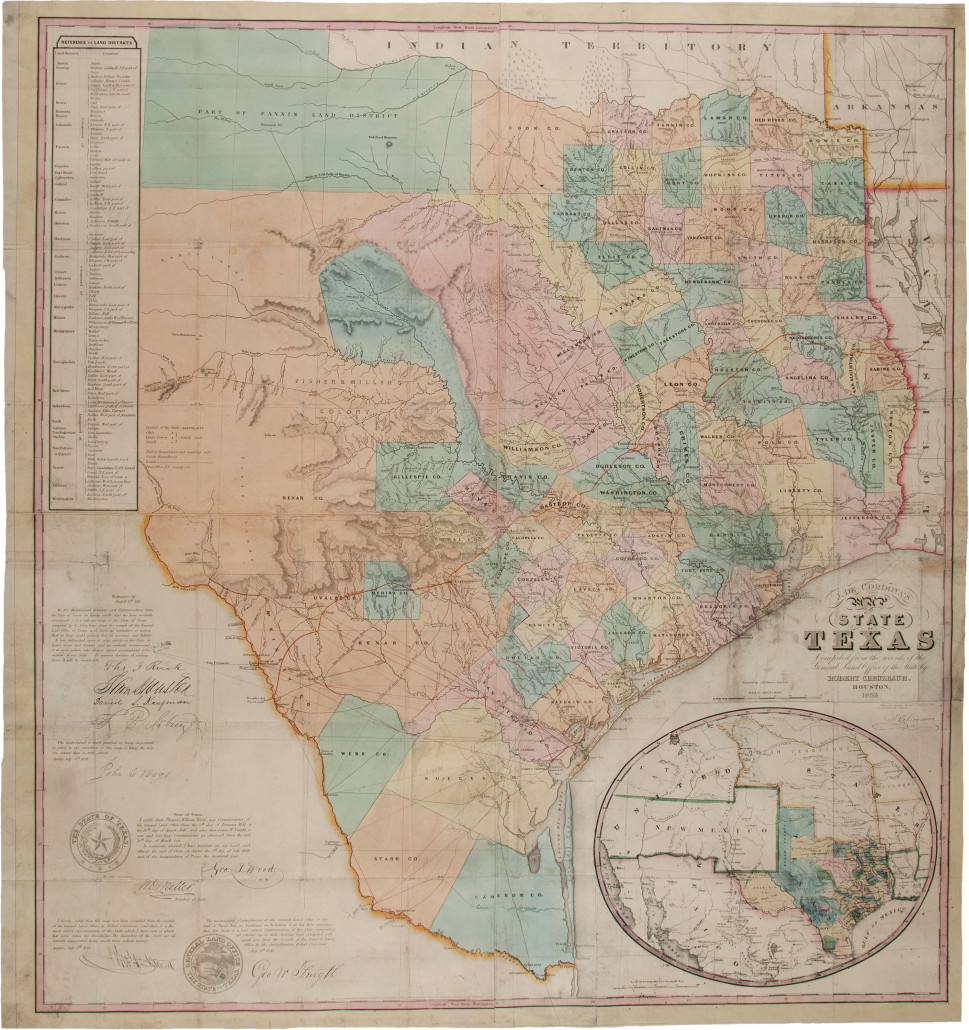 This 1853 edition of Jacob De Cordova’s Map of Texas sold for $10,000. Image courtesy of Heritage Auctions

DALLAS – A rare and early map of Texas and related historical documents once owned by surveyor James M. Manning – discovered in a box of sheet music purchased for $10 decades ago – sold for a combined $10,500 on March 12 at an annual Texas history auction held by Heritage Auctions.

Both the map and a letter were purchased on behalf of the Mary & Jeff Bell Library at Texas A&M University in Corpus Christi, which maintains a collection of James. M. Manning’s personal and professional documents, including maps and letters. Manning died in 1872.

An 1853 edition of Jacob De Cordova’s Map of Texas sold for $10,000. Signatures indicate it was once owned by Manning, the deputy district surveyor in Corpus Christi, who was responsible for adding crucial updates to the map for the 1853 edition. The large lithograph map, measuring 32 3/4 inches by 34 3/4inches, is colored by hand and depicts early counties, cities and towns, roads, rivers and Indian territories. It was sold along with some of Manning’s military documents. A letter from De Cordova to Manning, ensuring Manning would be paid for his work, sold separately for $500.

The map and letter was discovered in the mid-1980s in Indiana by Crystal Murray, who won a $10 box lot of 19th century sheet music at a small-town estate auction. She bought the music for her children who were learning to play the piano, but also discovered Manning’s map, his military documents and the historic letter.

“All of the music was from within that period of the late 1800s and we discovered the map in the box. We thought it was interesting and we always kept the letters with the map,” Murray said.

Sandra Palomino, director of historical manuscripts at Heritage Auctions, said the De Cordova map was first issued in 1849, but what makes this example unique is that it appears to be Manning’s own copy. “Manning was deputy district surveyor for Corpus Christi in 1852, and the small book holding the map is signed: “James M. Manning’s map / corrected for its Author by said Manning,” she said.

An 1876 copy of Fourteen Hundred and 91 Days, in the Confederate Army, one of the rarest and most coveted books on the American Civil War, was the top lot of the auction. The first edition, one of only 100 copies hand-printed by the author, is a bound journal kept by W.W. Heartsill and illustrated with 61 original albumen photographic portraits (including one of the author) mounted on leaves with printed captions identifying the subjects. Six bidders pushed the auction price to $45,000.